Dancing in the Darkness: an ACTORS/ Jason Corbett mini-interview 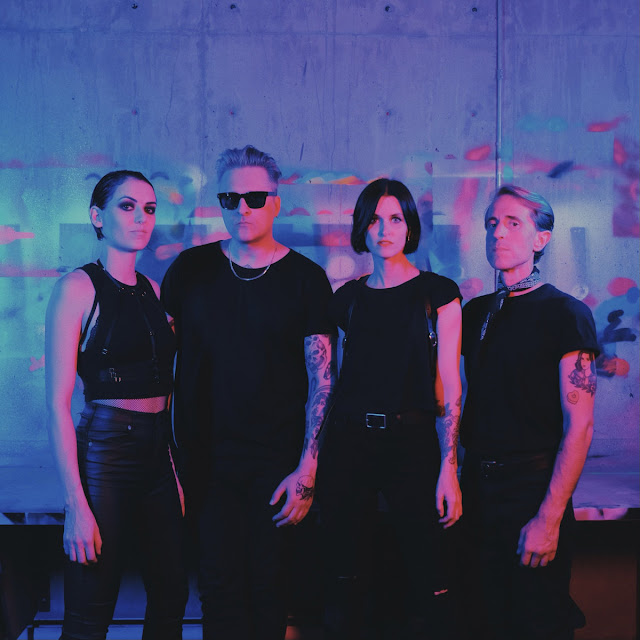 I grew up with an unrequited longing for a big-haired Goth female friend. We had a few areas of musical overlap, like the Cramps, but - while I was listening to the Dead Kennedys and Crass and DOA, she mostly was big into Skinny Puppy, the Cure, Duran Duran, Siouxsie and the Banshees and Bauhaus. Thinking it would increase my chances with her, I did try to get into all of them, to mixed results. "Assimilate" aside, Skinny Puppy's industrial electronica never really sank a deep hook - they just didn't have enough things that I recognized as songs. I liked the punkier edge of Bauhaus and a few Cure songs, mostly around the time of Faith - and, with said big haired Goth friend - even saw the Cure once at the Coliseum, on the Head on the Door tour - but as a straight horny teenager, 17 when that album came out, I was more impressed that night with being jampacked into the pit with a thousand screaming teenaged girls than I was with the band, who seemed kind of awkwardly precious and overly sensitive (Robert Smith practically seemed to wince at the shrill cries of "We love you, Robert!" coming from the floor, and his attempts to dance were greeted with such rapturous, hysterical shrieks that he shut them down very, very quickly, cringing behind his giant moussy hair). Mostly, though, when it came to bands like the Cure, Duran Duran, or Siouxsie and the Banshees, I was with DOA on the page of "New Wave Sucks," or chuckling at Jello Biafra's dismissive swipe at New Wave in the intro to "Pull My Strings," where he typifies New Wave as being about wanting to "make big money playing rock'n' roll" - while seemingly thinking of power pop group the Knack (cf. "my Payola"), who aren't remotely New Wave by any accurate conception of the term. 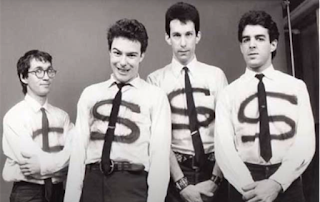 It took a trip to Japan, where record stores like Disk Union would actually have "New Wave" sections on their shelves - to make me realize that this attitude was just some sort of punk-driven prejudice that actually saw me rejecting a whole genre of music for no good reason. Bands like Joy Division, New Order, Gary Numan, Bauhaus, the Cure and Depeche Mode are not, contra-Jello, some watered-down, commodified version of punk rock - they're not punk rock at all, but their own distinct genre of music. Maybe there WERE pop groups that could be described as "New Wave" (Duran Duran, the Thompson Twins, Bananarama) who were using elements of punk fashion in the service of pop success, but even some of that is highly creative and fun (I mean, who doesn't love Cyndi Lauper singing about masturbation?). There are huge distinctions between punk (which tends to be hypermasculine and aggressive and sometimes quite homophobic) and New Wave/ Dark Wave (which tends to be a bit more female-centred and gender-fluid and favours people who want to dance BY DANCING, not by slamming into each other), but other than both being mostly underground musics that flourished in the early 1980's, there's really not much that that punk and New Wave have in common...
Which brings me to Vancouver's ACTORS - whose genre-diverse backstory is well-covered online, for example by John Lucas, here - and whose newest album, Acts of Worship, can be explored for free on their bandcamp (check out "Like Suicide" and "End of the World," which seem to be fan favourites). There is an excellent opportunity to see them live, on Nov. 27th at the Rickshaw, with a stellar lineup of bands that complement them, like post-punk openers from New York, Bootblacks, gender-nonconforming synthy solo artist Devours ("a juxtaposition of dance-like music with dark but humorous lyrics," Mo Tarmohamed tells me), and Vancouver's own esteemed The Gathering. I have no hair to mousse, these days, and have no idea what I own that I can possibly wear (my  Night Breed t-shirt might do, but none of my boots end in points: uh oh!), but suddenly - hungry for concerts and cool stage lighting, and fond of the aroma of dry ice, I am totally excited about the prospect of seeing my first New Wave-ish rock show since 1985! I MIGHT EVEN DANCE. At my seat. Because that's what we do now.
A mini-interview with ACTORS frontman Jason Corbett follows! Maybe see some of you Saturday...> 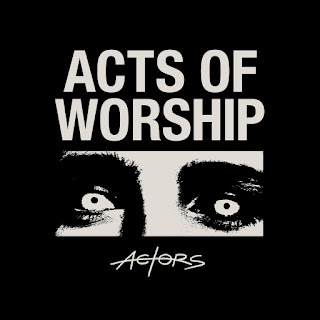 Allan: I love the cover art of Acts of Worship. Who did it? Whose eyes are those?

Jason: Thank you. That’s Shannon’s design [keyboardist Shannon Hemmett]. She does all of our artwork and even most of our photos. The eyes are a secret.

I’m surprised to read that your musical background takes in rockabilly and psychobilly and such (I never got to see the Saddlesores but I certainly heard of you!). Is there any overlap between what you were doing then and what you do now?

Genre-wise no. I feel that with each new project you grow as a musician and performer. Before the Saddlesores I played metal. No matter what kind of music I was playing over the years I was ultimately just trying to express myself and connect. ACTORS is the truest form of that expression for me.

Had you always liked Darkwave and New Wave, or was it something you came to later? Do you have any formative live show experiences that planted the seed that would become ACTORS?

I had exhausted myself chasing what I thought would be “success.” I started writing and producing music based on what I was really feeling and wanted to explore. That was the beginning of ACTORS. The music from my childhood just bubbled up to the surface. Roxy Music, Gary Numan, David Bowie, and Duran Duran all somehow influenced me on a subconscious level. At the end of the day though there’s so many influences from over the years.

Do you find that bands that get described as New Wave or Dark Wave are better received in certain cities or countries than others? …are there places where it is less well received?

It might sound obvious but the larger cities seem to have larger crowds for these genres. We have been fortunate that every country we have toured to has been really good to us. I will say that our fans in Germany seemed to be the first onboard when we started.

The band has a very cool (and maybe expensive?) "look" - is that something Artoffact helped with? (Do you have a budget for clothing, sponsors, or particular brands or stores you favour...? ...or does everyone just take care of their own clothing?).

Haha that’s by accident really. We sometimes jokingly remind Adam [Fink, the drummer] to wear black as he is the only one of us to deviate and incorporate some color into his wardrobe when not on stage. We really all just prefer to dress how we dress so it’s been convenient as a band.

The lyrics on Acts of Worship have a consistent dark thread running through them – cold hearts, cold love, cold eyes, and a fair share of desperate, unrequited desire… it seems like there might be an underlying theme or even story - is there? Is it autobiographical, or are you taking on a character?

I honestly haven’t unpacked all of the album's lyrics yet. I write the music and the lyrics have a way of writing themselves. I find clues that open the doors to mysterious places. We all have those mysterious places.

Re: the line about “Heroic doses” in “Like Suicide” – is the song about addiction?

That line is about about the copious amounts of heartache we allow ourselves to endure when it comes to love and relationships.

There’s a line on the Genius Lyrics website for “End of the World” – “Make it twist until I feel?” Is that accurate? What is that referring to?

If this is the end why don’t I feel more? Go ahead and try to hurt me, it’s nothing I haven’t experienced before.

Do you ever worry for your audiences? (Have fans disclosed self-harming behaviour, or other self-destructive tendencies?). I haven't seen you live, but it SEEMS like you might draw some unhappy people (who nonetheless want to dance...).

I was initially worried about the song titles on the new album sounding too dark. You have to dance in the darkness or it swallows you. I think our fans want to dance.

Have you played any COVID-era shows yet where people are discouraged to dance? That seems really, really weird. Unleash the Archers, the metal band, had pretty good luck getting people just to stand at their seats and bang their heads last week, but that’s kind of what a metal audience DOES, anyhow…

The Vancouver show at the Rickshaw is our first proper show in two years! Just to be in the same room with our people is enough for us.

Do you ever do covers? Always interested in what songs people choose to cover...

We have released a couple of covers over the years but I don’t foresee us ever playing any live. We have too much ACTORS music to play now.

Any particular relationship to the opening bands next week that you want to acknowledge, or anything else about the live show you want to say...?

Let’s just say the line-up for this show is as close to a family reunion as we can get. I couldn’t be happier to have them on board with us.
As of a chat with Mo last Saturday, tickets were still available for ACTORS at the Rickshaw. Act soon... 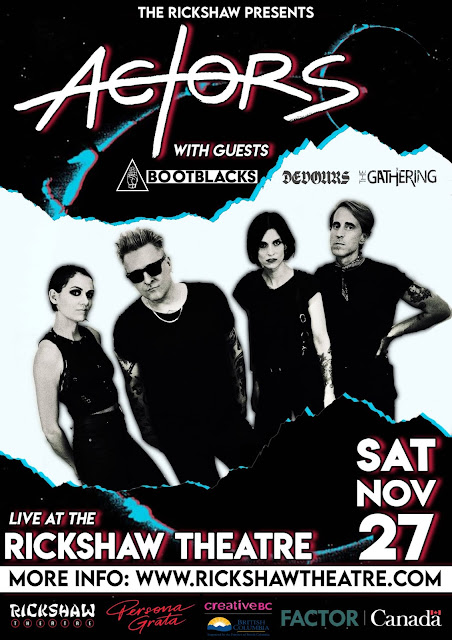