News broke this week that the SBC Restaurant has had its liquor license revoked, and that all gigs there have been cancelled, seemingly permanently. Some people have speculated that that is due to the recent dragging mishap, which left a 24 year old woman quite badly injured - even though footage has emerged that that may not have been entirely the fault of the driver. Others have speculated online that it may have something to do with development plans for the block ("FOLLOW THE MONEY," one observer, herself no stranger to venue closures, wrote, all in caps...). And of course, there's the chance both situations apply: that opportunists waiting for an excuse might have seized upon the dragging as a pretext to take the SBC out of the picture. Whatever the reason, Cecil English and Donna Mabbett (previously involved in booking the Flamingo, I believe, which also bit the dust as a venue location not long ago) are left venueless for the time being; and another historic location in the Vancouver punk scene has bitten the dust. Even a gig I was planning to write about and attend this weekend got cancelled: that being Bloody Betty Bathory's GG Allin tribute act, which I had previously written about here.

So it goes. Meantime, people who, like me, were hoping for a Betty Bathory-level of derangement at a gig this weekend can take heart: Betty also has a gig this very night, with Daddy Issues, at the Lanalou's Halloween Hellraiser. I am not promising that I will be there - I've been nursing a cold all week, loudly coughing up - to the great disgust and dismay of my wife - great greygreen goobers, and have already missed one gig (David M. at the Princeton on Monday) and two horror movie double bills (see below), as a result (and even one day's work, last Friday; and most of the Adicts show last Thursday, though I did stay for a couple of songs, having bought the ticket and so forth. But whether I am up for a show tonight or not, the least I can do is plug the gig. 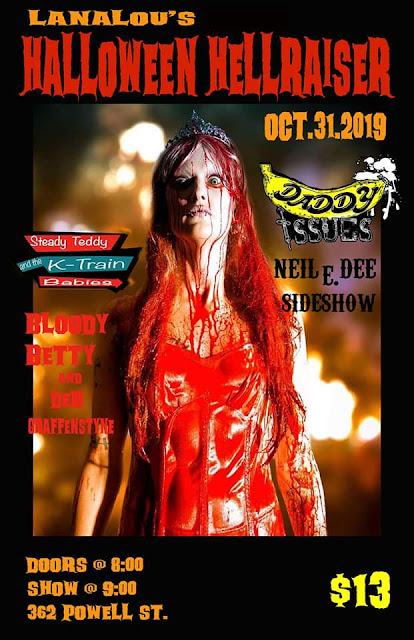 So here, copied directly from the Facebook page for the event:


Halloween night come raise hell with the spookiest freaks in town. For real. Don't miss the most action packed horror filled evening guaranteed to shock, titillate and (knowing you all) OFFEND.

Featuring:
**********
DADDY ISSUES:
If you haven't seen them you've definitely heard OF them. Featuring members of Dayglo Abortions, Powerclown, No Likes, The Subhumans and Bloody Betty.
Nope, nothing offensive to see or hear here.

NEIL. E. DEE SIDESHOW:
Vancouver's reigning master of the bizarre. If you have somehow avoided this man's show thus far you should just stop that crap RIGHT NOW. No extra charge for the lasting mental trauma sure to ensue. He really stays with you. Sometimes he even follows you home.

STEADY TEDDY AND THE K-TRAIN BABIES:
Are SO FUCKING GOOD you cant afford NOT to see them. Seriously they are one of the best bands in Vancouver right now. Give them your money.

THE GRAFFENSTYNE CREATURE:
Responsible for the splatter F/X, temporary genitalia and severed appendages that adorned the stages of Bloody Betty and The Deadly Sins shows for almost a decade. Shes gonna eat a corpse. You probably don't wanna see that but you should anyway. It'll be good for your constitution.

BLOODY BETTY:
If you haven't heard about her we aren't gonna tell you. Yeah it's that bad. Soooooooo we dare you.

Posted by Allan MacInnis at 9:24 AM