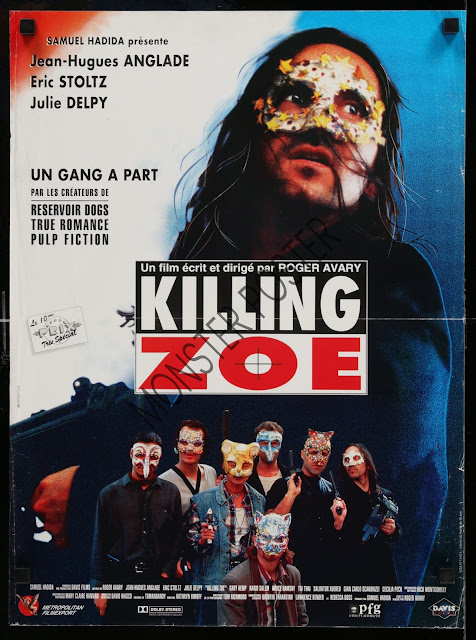 I am excited to see that Roger Avary has a new feature film, Lucky Day, slated for theatrical release next weekend. (I have no idea if it is going to open in Vancouver). The film has not been well received, at least not by the Globe and Mail, but I see on social media that the fanboy contingent is excited by the promise of a meaty new role for Crispin Hellion Glover, who has muscles and can kick, but doesn't get cast in too many major roles these days. There is a trailer; I have not watched it, since I know I am interested in the film, simply because it is written and directed by Avary. Critics who are unfavorably comparing it to Pulp Fiction - which Avary co-wrote - are already missing the point, since Avary's true claim to fame is a charming 1993 black comedy/ heist thriller, Killing Zoe - a flawed film, but a vastly entertaining one, which he wrote and directed, and which boasts no share of charming features, including the following:

1. Eric Stoltz and Julie Delpy, both very fun to watch in the lead roles, though Stoltz - an actor I like - is a bit subdued and inexpressive at times; he's done better work, but he's still fun to watch. Delpy, however, is at her prettiest, and acts with conviction. Is Stoltz's Black Flag tattoo in that film real, I wonder?

2. The film has a delightful representation of someone being pressured into getting much more stoned than he wants to be, then trying to negotiate that. I have seen this happen in very few films, but it sure does happen in life. No one ever gets more fucked up than they want to be in movies. Especially the night before they're supposed to rob a bank.

3. The film is also a great object lesson in why you never, ever want to rob banks with a hedonistic, terminally ill, drug-addicted French lunatic (played with an unhinged joi de vivre Jean-Jugues Anglade of Betty Blue; he is the real star of the film). The idea of trusting a friend against your better judgment, believing that what might seem like a bad idea could all work out for the best, based on that person's assurances, and then having to live with the consequences when things turn out even worse than you might imagine, is pure film noir.

No one talks about Killing Zoe much these days; the only reference to it I've seen since the 1990's is in the documentary about Ron Jeremy, whatever that was called, where his cameo in the film gets talked about. (I challenged my wife, with whom I just shared the film, to a game of "spot the hedgehog," but she aced it easily, even though he's only on screen long enough to put up his hands and get shot). But I'm very fond of the film, always have been, and may have occasion to see it again some ten years from now (I've watched it maybe four times now, each at sizeable intervals; it's become a kind of cinematic comfort food for me). The film is very entertaining, if you can find it. It has some amateurish qualities - like, the drummer in the cabaret scene is noticeably not drumming on anything - but it has charms all its own, which make it a unique, memorable entertainment.

By the by, did you get my Crispin Glover joke? See here, if not. I remember seeing that on TV when it first aired. It was rather startling!

I am down for Lucky Day - screw the critics.

For the time being. 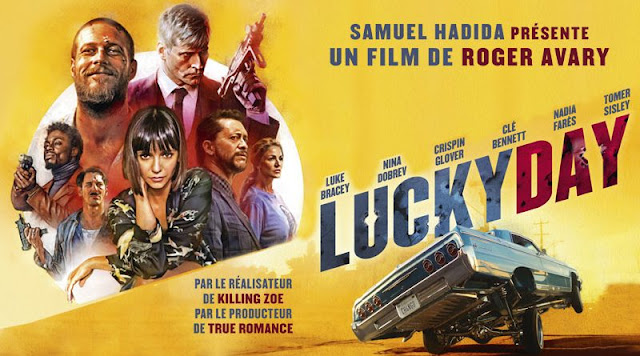 Posted by Allan MacInnis at 1:13 AM