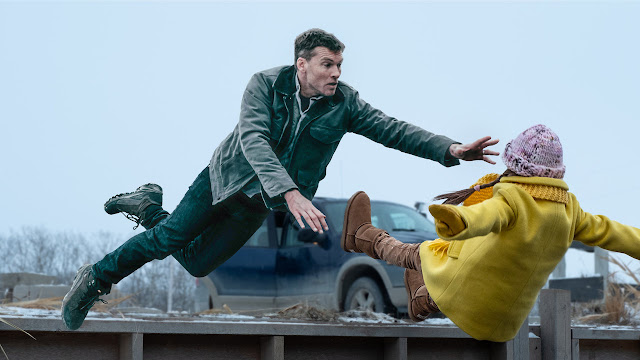 There's a sort of subgenre of thriller, not to my knowledge being presently grouped together and acknowledged as a subgenre, where a main character gets their beliefs fundamentally challenged about reality and/ or their mental health, often around the issue of a child in jeopardy, who may or may not exist. Some of the bigger-budget examples include The Forgotten, with Julianne Moore; Flightplan, with Jodie Foster; and Non-Stop, with Liam Neeson, which is in some ways atypical, and in some ways not. The formula for the film usually has four distinct phases: the set up, where things are as they seem, and our hero unquestionably virtuous: the challenge, where our hero finds himself in a Twilight-Zone type reality where no one believes them about some fundamental issue, and they become increasingly isolated; the ordeal, where desperation is most palpable, and we and our hero - who is struggling against doubt and perhaps dishonesty and nefarious schemes - are led to entertain the possibility that what we think we know is wrong, and that they really are, as others claim, insane, deluded, deeply in error about the world they have been living in; and the resolution, which can vary, but usually - sometimes at the cost of great improbability, most palpable in The Forgotten (and if I recall, an even more absurd alternate ending for that film) - the hero is vindicated, proven right, and not only is reassured about their grip on reality, but saves the day for others. The borderline between these last two phases of the film is sometimes fluid: sometimes the ordeal "fakes us out" with a resolution that is as we expected it would be, then reveals that really the ordeal has not yet ended.

There are, of course, variants in how this story manifests. Jodie Foster, in Flight Plan, boards a plane with her daughter, then wakes up on the flight to be told her daughter was never with her. Julianne Moore, in The Forgotten, goes to bed one night (as I recall) in a world where everyone remembers, along with her, that she had a son who died in a plane crash, then wakes up in a world where everyone but her has forgotten he ever existed, and she must prove that he in fact was real. Non-Stop deals with an Air Marshall who may in fact not be who he thinks he is; he is trying to rescue passengers on a plane from terrorists, not a child, as I recall, but for a time, reality shifts, and the hero is encouraged to believe, very credibly, that he is, in fact, the terrorist, and is suffering a mental breakdown. Calling into question - in all three cases - the sanity of the protagonist also teases us with the possibility that we, in identifying with them, have been wrong all along; the resolution, in all these examples, soothes us by ultimately vindicating our hero, and assuring us, in fact, we were right.

They're odd films. I find something in them objectionable, in that they seem to suggest no one is ever mentally ill - that people who appear to be in the grips of a deep delusion have been, in fact, correct all along. It's not like people who suffer from delusional thinking need to be encouraged by such films that if they stick to their guns, everything will eventually work out all right for them. (It's such a strong feature of the above films that it almost makes the "happy ending" predictable; I mean, what mass audience is going to pay for a movie where they leave the theatre being told they were wrong all along? Save that for the arthouse!).

But there's also an interesting aspect to them, almost a conspiratorial mindset at work, since often our protagonists are pitted against institutions, authorities and so forth. These are almost always incorrect; sometimes they are malignant, even responsible for the threat in the film. That paranoid mindset, where you are encouraged to disbelieve the reality you find yourself in - where reality and the forces aligned with it seem like some vicious prank - has an almost Phildickian aspect, is kind of subversive and possibly anti-authoritarian. (I don't know all my Dick, but Flow My Tears, The Policeman Said definitely has relevancy here, only there the person whose existence is called into question is the main character, himself). If only the films didn't end with such a strong reassurance that we were  right about reality all along - if only they were allowed to end with a note of doubt - the genre would be even more interesting (it occurs to me that Take Shelter also fits into this "type" of film, though it is far better than any of the other films I've used as examples).

The director of a new Netflix thriller, Fractured, is Brad Anderson; he has previously made two superb films dealing with mental health issues, Session 9 and The Machinist, and another that is at least interesting (Stonehearst Asylum; it's okay, if you're a fan of Michael Caine and Ben Kingsley, but it owes a bit more to genre, is not as fresh as either of those films; of course, he has several other films to boot, but none on mental health issues, as I recall).  In Fractured, after an accident, a man - played by Sam Worthington, who does fine work - finds himself in a hospital, where we have seen him bring his daughter; only - after he passes out in the waiting room and wakes up - no one believes she exists, there's no record of her, etc. It definitely fits with the above subgenre of films, and plays on some of the conventions mentioned; but you get the feeling that Anderson has thought quite a bit about these conventions. That's about all I want to say, but it's quite a gripping thriller. It's still not as good as Session 9, but few recent horror moves have been.

Anyhow, check it out. (I really can't say more than that, but personally - and even this is a mild spoiler - I liked the ending a lot. Apparently it has been contentious (bigger spoilers there, and an odd attempt to reference the subgenre by citing an example-free trope apparently named for Hitchcock's The Lady Vanishes, which I have not seen, but which may also have a bearing here).
Posted by Allan MacInnis at 12:47 AM