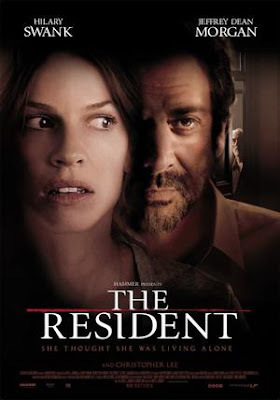 Maybe my favourite of the sorta-recent Hammer horror movies is The Resident. It's got a very interesting story, some rich psychology: it takes you inside a damaged male mind in a way that is seldom done in cinema. It pulls some of its punches, in the name of appealing to the mainstream - because a man who has allowed himself to degenerate sexually to this extent would live in a world of pornography, for one thing, of which there is no trace. And like a lot of thrillers, the "who will win" contest at the end of the film is less interesting than the set-up. But there are fine performances by Jeffrey Dean Morgan, in a role very dissimilar to Negan; Hilary Swank; and the late Christopher Lee, who is very effective, even if only briefly used. I can understand the film's villain in ways that disturb me, in ways I shouldn't publicly admit. It would be a fine double bill with, say, Tobe Hooper's best later film, The Toolbox Murders, or grouped with other movies (like Rosemary's Baby or Panic Room) which involve a woman and/or family moving into a new building. Kind of recommended (Wake Wood, as I recall, is pretty good, too, of the recent Hammers, in a more Pagan way - kinda like Pet Sematary Meets The Wicker Man).
Posted by Allan MacInnis at 12:23 AM