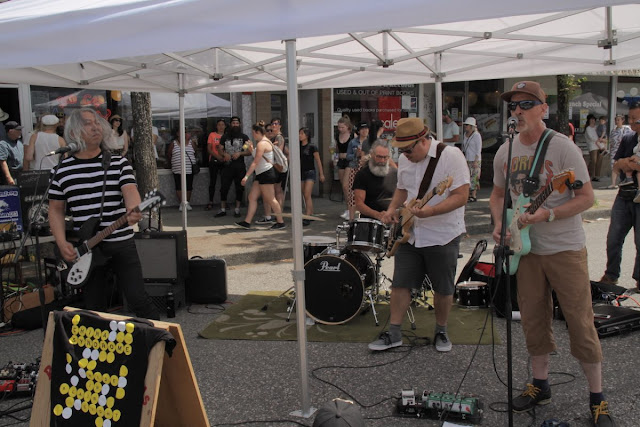 The strangest thing about the conversations with the Nick Cave event the other week was finding myself standing about a foot from Elvis Costello and Diana Krall, as they negotiated the crowds near the beverage area. I got to say to my buddy Will, who had provided the tickets, "dude, look - it's Elvis Costello and Diana Krall," in the classic celebrity-spotting whisper one does; I can't recall the last time I had occasion to do that, but it was probably more on the lines of pointing out Stephen Hamm at the Cinematheque to my wife, which is kinda a less excitable whisper, y'know? (I like Hamm's new material a lot, mind you). Later in the evening, Elvis (but not Diana) got called out by a fan, and ended up the subject of a bit of Mr. Cave's humour: Cave was answering a question about declining his MTV Music Award, explaining it was mostly because he doesn't enjoy the experience of being at awards ceremonies. Observing that he sometimes doesn't even pick them up, he gestured at Costello - "you know what it's like," then chuckled and added something to the effect of how Costello probably does pick his awards up, probably has a roomful of them. It seemed a wee, weird poke at Costello (whose reaction I could not see; I hope he smiled). In any case, Mr. Costello does a spectacular job of walking through a crowd radiating a distinct vibe of "yes, I know you know who I am, but I really don't want to interact with anyone right now." I certainly wouldn't have disturbed him for the world, even though I have been a fan for years (not that I know a lot of his body of recorded work; but the albums I know and like, I like a lot).

Anyhow, Tim Chan of China Syndrome is obviously also an Elvis Costello fan, because not only does he know about Costello's video for "What's So Funny (About Peace, Love and Understanding)" - which I had never seen before today! - but, with the help of Vancouver Island punk documentarian Paulina Ortlieb, whom I interviewed here, he has released a video for China Syndrome's song "Curated," which pays explicit homage to the Costello vid. That video "made a huge impact on us when were kids," Chan explains, "especially because it was filmed in Vancouver, so we thought it would be cool and fun to use it as an inspiration for ours.”

The press release offers a fun story that "during the video creation process, the band had a chance encounter with Elvis Costello himself. Chan recounts, 'We ran into him on the ferry on the way to Vancouver Island. We didn’t tell him about the video, but he was very nice to chat with us and he seemed interested in the band.'"

Elvis can take my word for it, China Syndrome is superb; and they do a mighty fine Squeeze cover or two, as well. My past interviews with Chan can be found here and here.

As the press release further explains, “'Curated' was co-written by Chan and guitarist Vern Beamish and is from China Syndrome’s fourth album, Hide in Plain Sight, produced at Vancouver's JC/DC Studio by David Carswell (The New Pornographers, Tegan & Sara, Destroyer, the Evaporators, Apollo Ghosts). LPs and CDs of the album are available from local stores including Zulu Records, Red Cat Records, Neptoon Records and MusicMadhouse Records; the album can also be streamed from digital music platforms including Spotify, Apple Music, Google Play Music and Bandcamp, among others."

China Syndrome's next show is on Friday, November 22 at the Fairview Pub in Vancouver.
Posted by Allan MacInnis at 7:36 PM