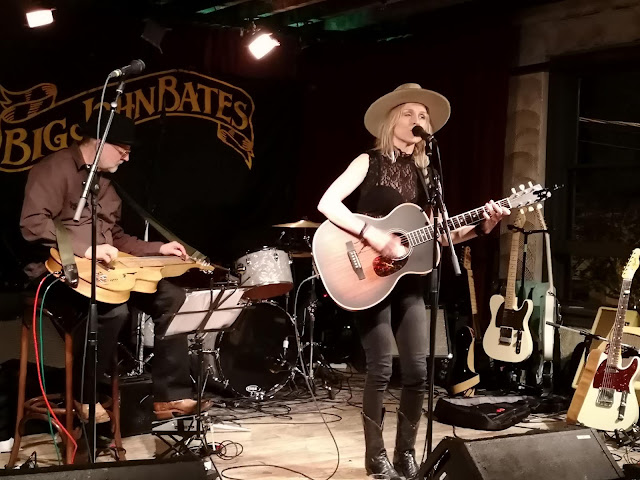 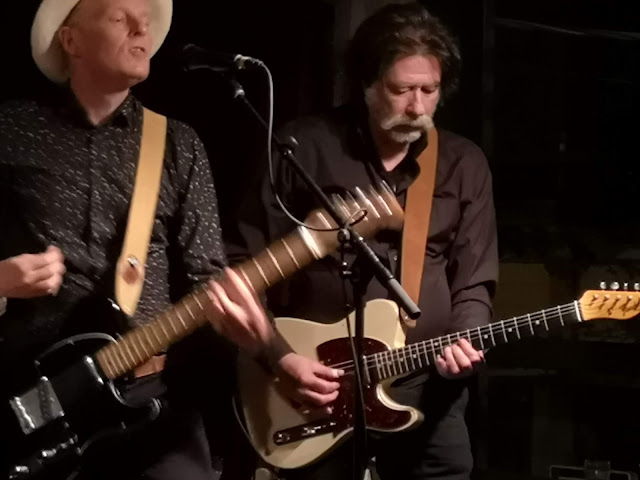 Eric Cottrell and Scott McLeod of the VanRays, photo by Allan MacInnis


Went to the new Railway - the Railway Stage & Beer Cafe - for the first time last night, to see the Vanrays, whom I wrote about here. You know what? It's not bad! In fact, this could be a great little live music venue... with one caveat (which I'll get to at the end).

Yes, there are truths we sentimentalists must deal with: the train is gone. The mermaid in back is gone. The big sign over the exit with the bands who played there during the day is gone. There are TVs with sports on during the day. There are still some of the old touches preserved - but it isn't the Railway Club we knew and had an attachment to. That venue closed, and another reopened in its place, and there is simply no going back to the way it was.

But there's a plus side, too (beside it not being condos):

1. The area in front of the stage has been smartly rethought into a big standin'-and-dancin' area, without a single seat. This is a big improvement, because let's face it, the layout in the original Railway was daft, when it came to seeing bands: only maybe twenty or so people could get into the seats around the dance floor, and on a busy night - with people standing in between the tables and such so they could see the band too - fifteen of those twenty people who had seats had awful sightlines. On a quiet night, or for people sitting right at the front, it was no issue, but for any gig people were excited to be at, it was a struggle to see the band, and sometimes (because the people sitting up front sometimes were there to socialize) it wasn't all that easy to hear them, either. Making the area in front of the stage an SRO space to watch the music from maximizes the number of people who can actually see and hear the band, if that's what you're there to do. How many times did you arrive at the old Railway and find yourself trying to find a place to stand (or sit) that was in reasonable proximity to the stage? That's all fixed up now. The new layout also keeps the din of talking mostly to the bar and the backroom.

Oh, and from up front, the sound was fantastic (though it took awhile to get the Vanrays all soundchecked and set up).

2. The TVs playing sports are unwelcome, sure - I have never yet gone to a bar to watch TV, and find the flickering light distracting and annoying if I'm trying to see a band or talk to someone or eat or basically do anything but watch TV - but they change, once the bands go on, into a live feed of the bands! ...so that even if you did end up seated in back - or started out there and are skeptical whether you want to brave the squeeze past the bar to get to the front (which is still an issue - the bar itself remains unchanged), you can get some glimpse of what's going on onstage, and determine whether you want to work your way forward. While live video of bands performing is a staple of arena rock shows, I've never seen that done in a bar before last night. I have no doubt it has been, because it's a great (and obvious) idea, but it was still impressive: three nice flatscreens each with a perfect view of the stage.

3. The food, while maybe a little limited in terms of selection, is very good. I don't remember the food at the old Railway that clearly, but my recollection is that it was kind of average pub grub - not bad, but nothing that special (hence my lack of distinct memories of it). But I had the kale, corn, and black bean salad last night, and holy cow, it was fantastic - one of the zestiest, tastiest salads I've eaten. I sampled my wife's beet salad with goat cheese dressing and walnuts, too, and it was also quite good; and all salads are available with blackened chicken if you want. (We also shared guac and chips, and they too were great). I can't rate their selection of liquors (Erika couldn't get an ouzo or a pear cider last night, but I'm not sure if the old Railway had those, either), but personally, I don't drink anything too complicated, so I don't really mind (I had a Guinness and a rye and 7, and sampled my wife's gin and gingerale, and they were all just fine). And for those of you rolling your eyes at the idea of a kale salad, you can also get sandwiches and fries and some other pub staples. If the sandwiches are as good as the salad, they're gonna be awesome (I'll get one next time).

4. The big long tables in back are NOT as classy as the old little tables and chairs, but they're more functional, in terms of seating people: it reminded me more of the Cambie than the old Railway in that respect. Not as vintage as the old way, but very logical - which seems overall to be the way of things: the remodeling seems to have emphasized functionality over style, and while I did love the style of the old Railway, I can appreciate a functional space, too. You won't have the experience of having nowhere to sit in the Railway as it has been re-thought. I had that experience more than once in the old one.

5. Finally, and most significantly, it's obvious that the venue cares about keeping the same quality of live music that the vintage Railway had, and last night's bill - Shiloh Lindsey, the Vanrays, and Big John Bates - is very much in keeping with the classic MO of the Railway. (As was the Bad Beats bill the other week, tho' I missed that show).

So: it's great music, you can see the bands, they sound great, and there's good food and a much better chance of seat in the back. If you're having any trouble getting over the loss of the "old Railway" - well, really, I can appreciate that; but don't let it stop you from enjoying this new, different venue that has replaced it. It's a pretty cool venue. Vancouver needs those. And many of the changes simply make good sense. 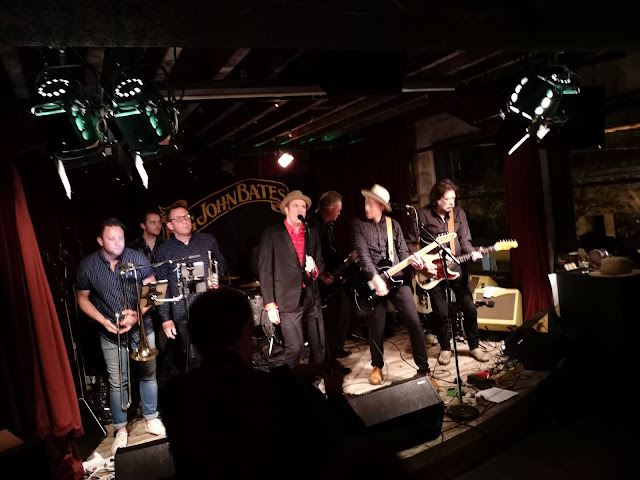 The Vanrays by Allan MacInnis

...with one caveat: I don't remember the old Railway EVER being as hot as the new Railway was, last night. It was not a hot night outside - was a cool enough evening that both my wife and I wore jackets over our clothes - but it was so hot inside that I ended up stripping off my jacket and shirt and standing around in my t-shirt. When I began to feel armpit sweat trickling down my body, actually dripping off me, I knew there was a problem. You could see that the Vanrays and other audience members felt it too - a lot of face fanning was going on. That I could see, only one window was open; either people were simply too dumb to open them - I was on the wrong side of the room to get to them, myself - or, maybe they can no longer be opened, maybe due to some concern for noise...? So now I'm wondering if maybe the old Railway had been grandfathered in under some pre-existing noise ordinance that allowed all the windows to be opened - which maybe no longer applies...?

In any event, Erika and I didn't last long, because of the heat - the Vanrays were stellar (as was Shiloh Lindsey, actually; we didn't get to Big John Bates) but it was simply too uncomfortable, heat-wise, for us to last much longer than a few Vanrays songs. (By time they got to "Taking a Dive," the fantastic lead song on their new EP, we were downstairs eating Did's Pizza.) It would be great if either more windows could be opened, or if, in the case that that is not possible, some sort of air conditioning could be added, because with summer approaching, the Railway is going to need some cool air to be truly comfortable. (I see from my Facebook posts on the matter that we weren't the only people who left early due to heat).

Other than the heat, though - it was a great space.

Oh, and Shiloh Lindsey, if you're reading this, that was a great cover of "State Trooper" you did. The originals were really enjoyable too but I really love a good cover, and that was one. Thanks! 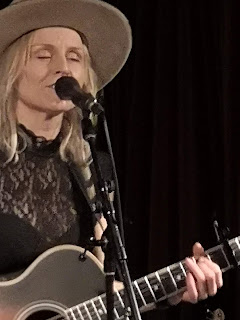 Posted by Allan MacInnis at 3:01 PM

Ugh, heat sucks. That’s a scary surprise. When people are on the dance floor how is this sitghtline from further back? How much a band can you see? Hey Allan are you going to David M tomorrow night at the Princeton? This is Judith I should be back and hopefully there before ten.

I plan to be at the Princetom, yes. I cannot speak for the view from the back of the room, since.I was not there, but overall it seems a much better layout for seeing bands than the old...

Erk, I had a fat thumb typo... I am om my phome... Anyhoo see you tomorrow maybe!