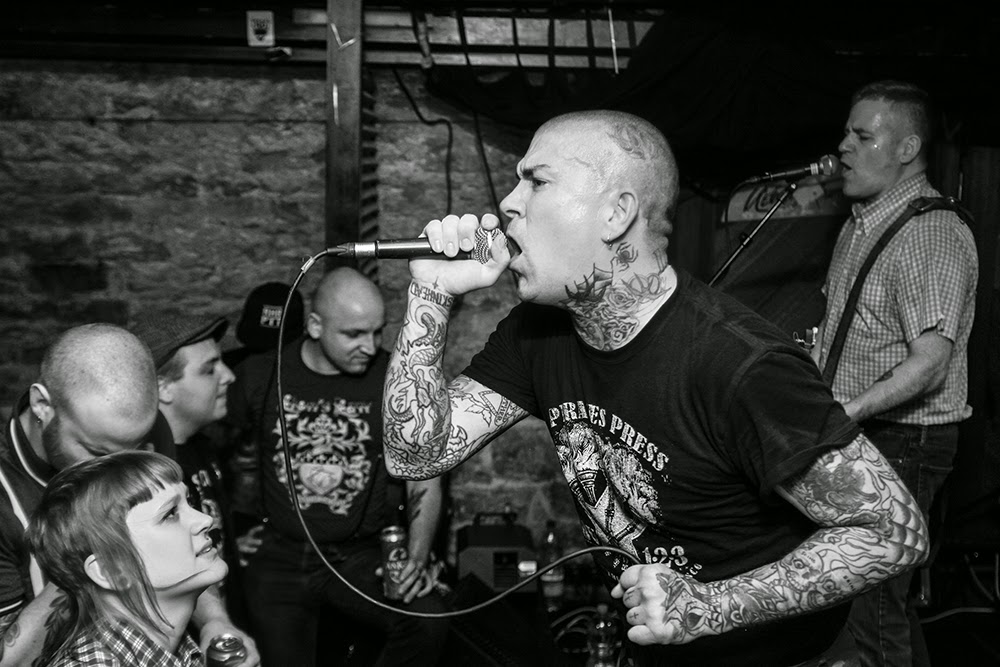 Had an interesting time talking to Orville Lancaster of Bishops Green; their recordings are growing on me a lot. One of the interesting things we didn't get to talk about in the Straight article - but which definitely came up in conversation was the whole issue (or non-issue, as it turns out) of racism and fascism, as associated with skinhead, Oi!, and street punk culture. The truth is - I should make this clear at the outset - I'm a near outsider to the subgenre, since I grew up on American hardcore, and only know a small handful of British punk bands (Crass, the Sex Pistols, and the Clash, with occasional digressions into not-really-punk like The Jam and the New Model Army). I've never owned albums by, or had much time for, bands like the Business, the Blitz, Stiff Little Fingers, the Members, Sham 69, the 4 Skins, the Cockney Rejects, or so forth; occasionally I've heard songs I like by such bands - on Chris Walter's recommendation, I picked up Cock Sparrer's Shock Troops as part of my prep for this interview, and I'm loving it - but as a whole, this is not really "my" kind of punk. Which is pretty cool, because it means now that it's a whole new world to conquer: suddenly I want to play catch up on this stuff, and it's all thanks to Bishops Green, who are making music as good and fresh and real as any of these bands (in fact, at present, I'd rather listen to Bishops Green than Sham 69, believe it or not - I like it more!).

Here's the thing, though. Because I'm ignorant of this style of music, if I see soemone with a shaved head, suspenders, and boots, I get immediately uneasy. I know very little about the racist side of skinhead music. I've met and talked with a nervous SHARP (Skin Heads Against Racial Prejudice) at Funkys who was worried some Aryan skinheads outside were going to cause him trouble for the Trojan tattoo on his neck, and he was very clear in explaining to me that the whole white power angle of skinhead culture came later in the game, that the original skinheads were into ska and reggae and in favour of cultural diversity. The presence of the occasional band like Skrewdriver on the UK scene - who released one classic album, then embraced the British National Party and started writing some pretty racist/ nationalist lyrics and playing Rock Against Communism shows - screwed things up for a lot of people, tainting the image of skins, making people associate them immediately with racism and neo-Nazism, but that really all was a digression for the movement, not its main raison d'etre. (Mind you, I actually am surprised at how good some of the later music of Skrewdriver still is, even after they embraced the far right, but that's another matter; I've spun a bit of it and am kinda weirded out how much I like their sound, while finding their lyrics often repellent).

Anyhow, one of the interesting things about the interview was the decision to leave that whole part of the conversation out of it. Lancaster was unambiguously against racism, against Nazism. He felt uncomfortable with the question from the gitgo, in fact, because it's kind of, as he put it, a "when did you stop beating your wife" question, where giving any answer in effect opens a can of worms and dumps it over the speaker; he thought it was a "shame" that the topic even came up - although apparently it does on a routine basis, with reviewers writing things like "these guys make great music - they better not be racist." In point of fact, there is not so much of a SMIDGEN of a HINT that there is anything politically objectionable about Bishops Green or their music. Lancaster's quote when I asked him about whether they ever have Nazis turning up at their gigs was:


I don’t get that at all, I know it’s out there, but it’s just so far from what we’re about. They wouldn't be welcome, I'll tell you that! I watched Star Wars the other day, and you know, Yoda says something very important, that fear leads to anger and anger leads to hate. There’s so many different ways to look at the world, and I just don’t get it - I don’t want to get it, I don’t want to understand it, but unfortunately, it’s out there every day.


After chewing it over with him, I figured that none of this was really necessary for the article. Why waste time talking with a really great band about something they DON'T believe in? It was better to focus on the interview on things they do believe in, do stand for. So that's what I did. But just in case anyone sees a photo of Greg Huff and bristles with unease, just for the record: that's all about YOUR prejudices coming through, not the band's. They're a great band. I'm excited that I'm going to get to see them (I missed seeing them open for the Meatmen a few years ago because I was waiting outside for this drunk girl who was supposed to show up at the gig, who never did... at least some Golers kept me company out there while I waited).
Posted by Allan MacInnis at 1:00 PM

Hi. I'm going to see them in Poland (Gdynia) next month and since I know nothing of them I needed some confirmation that they are against some nazi/fascist ideas. I understand why you had to pose such questions. I would also... Your post helped me a lot. Thanks :-) Beata