Anarchy in the JFK! Plus a heartwarming music journalism moment

One of the sad facts of music journalism: you almost never get positive feedback, especially from readers. If you do any good for the bands you write about (or the music fans you address yourself to), you probably won't ever hear about it. People are sure to tell you what they don't like about something you've written - sometimes with reason, but often with a pathological, cruel glee (especially in the "comments" section after an article in the Straight, say). But even a really good article, free of errors of fact or judgment, ideally is a somewhat self-effacing thing; if it works, the writer and writing should be almost transparent, with people left discussing what a great band the band is, looking at the moon, not the finger that points to it. Almost no one (other than the occasional editor) really notices or acknowledges when a piece is well-written; and if an article actually turns someone on to something cool, or helps a band fill a venue - it's almost like people think that we're all getting paid anyhow (sometimes not the case!), we're all parasites (sometimes the case, but not always), or we're doing it for our own reasons (sort of, but still)... The nicest piece of feedback I have ever received for a piece of writing came from a buddy who (if he was telling the truth) overhead someone at a Carla Bozulich/ Silver Mt. Zion concert say that she had never heard of either band before but came to the show because of the story she'd read in Discorder (which I'd written). That was around 2005 or 2006.  It remains one of the biggest and best compliments I have received for a piece of writing, and it got to me entirely by happenstance (this person COULD have written in, but didn't; if my buddy hadn't been standing next to her, I wouldn't have known about her appreciation at all).

There are exceptions to this rule. Izzy Gibson, former Piggy vocalist, sent me a nice note about my Piggy review in the Straight a few months ago, for instance (thanks, Izzy!). Certain people I've written about have become friends and readers and give me good deals on DVDs they're selling (David, Mom and I watched Touch of Evil last night, thanks!). But another bit of feedback that caused a nice warm glow for me, that once again got to me almost entirely by happenstance, happened when I ran into Jack "Fucking" Keating at the Liquor Kings' CD launch a few weeks ago. It was my first time meeting him, though I'd interviewed him about his role in the "fuck band" scene in Vancouver, and about the nature of JFK, named for him, as the ultimate fuck band. I was just sitting at a table when he came around with flyers for tonight's JFK show at Chapel Arts. I introduced myself, established who he was, and it quickly was revealed that HE CARRIES A PRINTOUT OF MY INTERVIEW WITH HIM in his back pocket, to show people who don't know about the band. Then he whipped it out and showed it to me!

The printout, that is.

Jack, I know I said something kind of sarcastic about the honour of riding next to your ass, but seriously, dude, that was a touching compliment - not anything you said, but the mere fact that you carry that article around, creased up and close to you, set a warm, coveted glow glowin' in my abdomen. I missed the last JFK gig because I was afraid some disgruntled Art Bergmann fan would see me and beat me up after my ill-advised/ poorly received Art Bergmann show review (and because I foolishly mentioned this possibility to my girlfriend, who got skittish; she's not much of a punk gig attendee in the best of circumstances). I will be missing tonight's gig due to a cold that has me sidelined in Maple Ridge (I won't be seeing any live music this weekend - which, alas, is nothing new for me these days). But seriously, man, I wish you and the band a terrific night!

Let me take this moment to thank all gig promoters, venue operators, bartenders, and, media-wise, photographers, editors, copy-editors, staffers, and publishers for their role in supporting the scene. They get thanked even less than writers, I imagine! (Special thanks to Mike Usinger for givin' me space to write about two really cool punk bands two weeks in a row in the Straight). And if you're looking for something to do tonight, folks...: 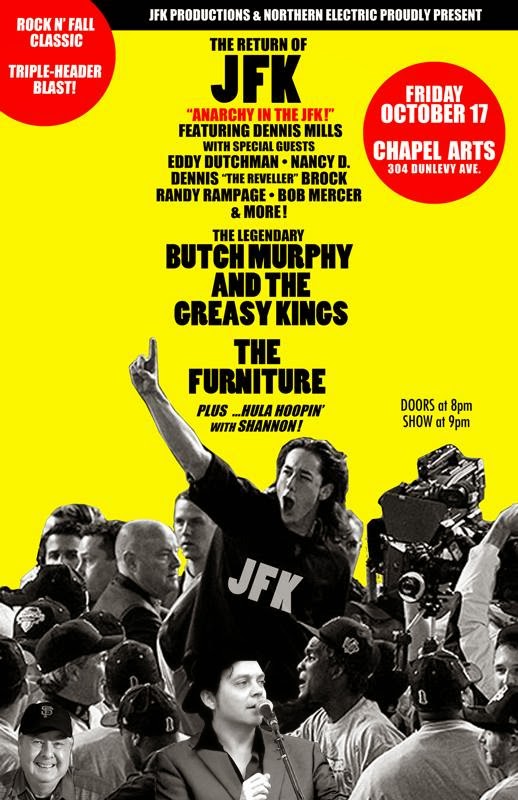 Posted by Allan MacInnis at 9:38 AM

Wow! Thanks for mentioning my comments! I didn't realize this was written until now or I would have said something sooner. I think music critics have a harder job than most musicians. When you play music everyone is overly nice to your face then just slags you in a comment section on the internet. It's easy to ignore.

If you're a journalists people have a hard time connecting your writing to the fact that you are a person expressing an opinion and it's not a rule meant to be forced upon everyone, just a point of view. Musicians should thank journalists for their time and talent put towards a favorable band review - and a review that is not so pleasant, well, just don't say anything. Being publicly vengeful won't help anyone. If you play live music, you know the name of the game, and that is; it's 90% made up of stranger's opinions of what you are creating and getting mad about that is like going to a walk in clinic and angrily ranting that you don't like sitting in chairs made of bus seats from the 70's and reading copies of People magazine from 1997. You knew what you were in for before you walked in and did it anyways. The very likely possibility of the general public hating your music was always a very prominent conclusion. If that wasn't true then band cages to deflect bottles in dive bars would have never been made and widely purchased.

It's rough being a music critic. Especially, one hired to criticize a profession they don't actually do. But it's important. Because your friend will always tell you you're fucking great when you may actually sound like a llama giving birth. But a stranger who's a journalist will tell you the truth and let you know why they have those opinions. Be thankful that stranger can say it eloquently instead of just making you into a shitty meme.

So, again, I thank you for your opinions. They are important for everyone playing music and listening to music.