The lesbians of 1957: Crime of Passion 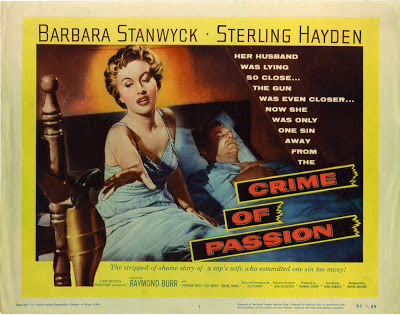 Had a delightful shock watching a 1957 film noir, written by esteemed noir author Jo Eisinger (a man). The film, Crime of Passion, stars Barbara Stanwyck as an ambitious career journalist who, despite fearing that marriage will be a prison for her, falls in love and marries a rather laid-back cop (Sterling Hayden). After the honeymoon wears off, she finds herself stifled, bored, and unable to identify with the nattering cop wives she's expected to trade recipes with; nor is she welcome among the boys. As an oultet for her ambitions, she begins to scheme on ways to advance her husband's career; these begin more-or-less innocently, but grow increasingly nefarious, until eventually she ends up as a sort of femme fatale. Still, the film never loses sympathy with her, and has been taken, according to Jo Eisinger's Wikipedia page, as being "a strikingly modern commentary about how women were driven mad by the limitations imposed upon them in the postwar period." Seems a reasonable reading!

Early in the film, before Stanwyck gives up her newspaper column, there's a scene where she writes a heart-to-heart, woman-to-woman letter to a female murderess on the loose (this is the case where she meets her future hubby). The film shows various female newspaper readers reading it aloud, including a couple of women who appear dressed for bed - which hints at the possibility of a lesbian relationship - but then gives us an unambiguous shot of two San Francisco female cab drivers on a break. I somehow suspect even in 1957 it wouldn't have been too hard for audience members to peg their sexual orientation: 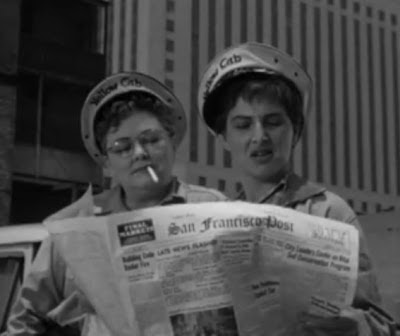 Sadly, I'm not the first person to comment on this scene! A highly startling moment for a film from so long ago. A pretty good movie, too, though it's probably better to come to it as I did, knowing nothing about it (I saw it on the shelf, though, "Stanwyck and Hayden? Cool!" and read not a word on it until afterwards) than with raised expectations. Thanks to the Genetic Method blog for posting the screengrab that I stole...

Note: the lobby card above makes it seem like Stanwyck shoots her husband, but rest assured, for those of you who get pissed off by spoilers, that it's a completely deceptive ad!
Posted by Allan MacInnis at 2:44 PM