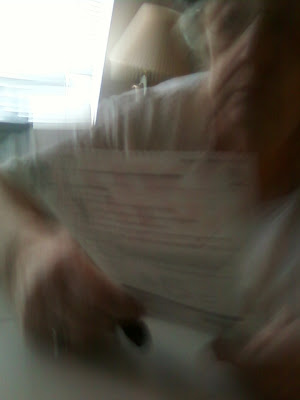 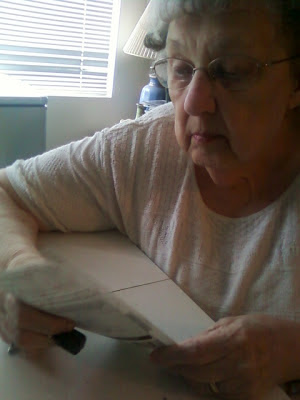 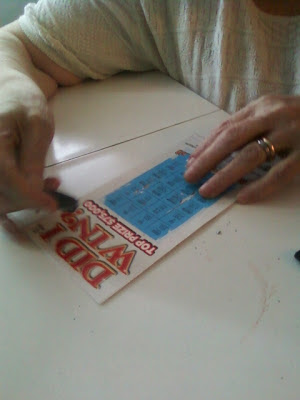 I have sometimes complained about being marooned in Maple Ridge. Getting out to shows or films, and remaining in easy contact with my friends, has not been easy for me here, especially given that I don't drive. Work has been limited to what freelance writing gigs I've been able to scrape up, and the odd shift at a Vancouver used bookstore. I find Maple Ridge rather empty of culture, and have yet to find a comfortable niche for myself here, other than what I can make of my apartment. In many ways I feel like I have set my life on hold to take care of my mother, and while I have enjoyed her company and don't mind cooking and shopping and so forth for her, occasionally I do feel ready to move on to the next stage of my life. On the other hand, occasionally I feel twinges of self-doubt about my purpose in being here - as if the point isn't so much looking out for Mom as not having to have a regular dayjob; since she and I watch from one to three movies every day - the better part of my "work" as her de facto caregiver is simply keeping her company - I can't pretend it's not a somewhat dangerously comfortable, altogether too lazy way to spend the time.

Then come those days when she doesn't answer the phone.

Today was one such day. She called me late last night to check in, after returning from her latest casino venture. I knew she'd gone to bed okay. This morning, I called her at 11am - having adjusted my clock, this would be around 10am, but she's usually up by 9, so it wasn't that late. She didn't answer. This was no big deal - she could have been in the bathroom or showering or such, so I turned to some writing and puttered away for another hour or so.

Then I called again, closer to noon, given the time adjustment.

Well, it was about the time of day that I would normally poke my nose into a couple of thrift stores, to see what books, records, and DVDs have come in, en route to her apartment. I set out on my day, only moderately concerned that she wasn't answering the phone. Sometimes when she doesn't answer the phone, it's been due to her phone being unplugged (usually by me, after I've done a phone interview using her landline; but I haven't done one of those in weeks). Sometimes it's because she's gone out with a friend for tea (there is one person who visits her and sometimes takes her out). Her not answering the phone at 11, and again at 12, is not yet cause for panic.

By 12:35, leaving the first of the thrift stores on my route, the panic was setting in.

I feel a considerable variety of conflicted feelings at such times. I put forward various hypotheses: if she's alive, she's either out, her phone is malfunctioning, or she's had a stroke or other health episode that is preventing her from answering. The last of those is actually the most unlikely, since she's under treatment. It's more likely that she'll die before she's incapacitated to the extent that she can't answer the phone.

So I then have to entertain the possibility that she's died. She's 82. People die in her (all seniors) building all the time; hazmat teams and cleanup crews have been visiting the suite of one such tenant on the floor above her, who was dead in his apartment for three days before anyone found him. He wasn't even 70. Her heart is not good, and she's diabetic; plus she's taking lots of medicines, including blood thinners, which could lead to uncontrolled bleeding, if she cut herself (a messy scenario to contemplate). Most likely, one day, her heart will just quietly fail.

Though I take time to check a second thrift store - because if her heart has stopped in her sleep, there's nothing I can do about it - I continue to call her on my cell phone, and she continues not to answer. There have been a half-dozen days like this already in the last few years, and they've always proven to be nothing, but by 12:50, I'm getting increasingly worried. I start to do a fast check-in with myself: have I taken good enough care of her these last few weeks? Were our last words together kind? I fucked up my last days with my father, so my mind scans the last week to see if I have a lot to feel guilty about, if there was anything I'd done to make her unhappy, if I've done right by her.

I decide I have.

After acquitting myself, I must confess, part of me then starts to make plans, as I walk down the sidewalk to her apartment; because, maybe there seems the possibility, at least, that I'm now free - free of this town, free of this phase of my life, free to start over elsewhere. I'll use the small inheritance to pay off part of my credit card debt and relocate to Vancouver Island to be with my girlfriend. Will it get tied up in probate? Will there be any big expenses? Will I be able to cover my bills for the month while sorting out my Mom's affairs?

My heart is starting to beat a little faster as I round the final corner of her street. I'm reminded of why I have to spend as much time with her as I can, why I need to take care of her the best I can, keep patient, stay loving. She could be taken from me at any moment. She's still not answering the phone. I go over the scenarios, and the most likely explanation (other than the one I haven't thought of, which has, so far, always turned out to be the correct one) is that she's passed.

I let myself in her building, say hi to one of her neighbours, get in the elevator, and go to her floor. I have my key out and am already telling myself that the last thing I want to see is her chair, empty, and her purse beside it. (She wouldn't ever leave the building without her purse).

I knock, open the door, and there it is: her chair, empty, and her purse. Fuck. The living room and kitchen is empty. Her bedroom door is open. I can see through it that her bathroom door is open, too, so she's not in the toilet.

My heart is in my throat as I walk to the bedroom door and round the corner. And there is her shape, curled on the bed. It's now 1pm.

I lean over and touch her shoulder. "Mom?"

She rolls over, and, bleary eyed, curlers in her hair, asks, "What time is it?"

Mom, it turns out, couldn't get to sleep after her casino venture and took a pill the doctor gave her for her odd sleepless night. She slept soundly from 3am til 1pm - noon, if you subtract the night's adjusted hour. She's entirely fine, if a little groggy; she hasn't slept this late... ever!

And suddenly it's all back to normal. We started a movie - Jubal, an old Western with Glenn Ford and Ernest Borgnine - and she's waiting for me to come back home with some Chinese food for dinner, to supplement what I have cooked and waiting in the fridge. After we finish Jubal, we'll do another movie, maybe a courtroom drama. She likes those. 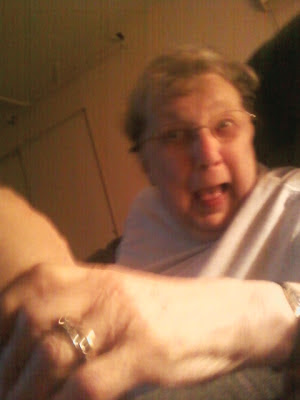 Posted by Allan MacInnis at 4:43 PM