Rental Roundup #2: Zero Dark Thirty, The Master, plus John Dies At The End 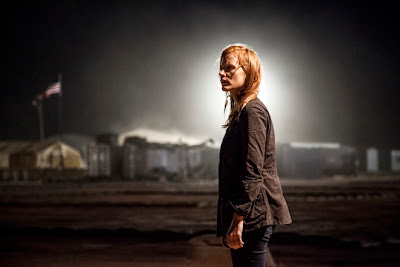 Zero Dark Thirty is beautifully, carefully made, a pleasure to watch, in terms of craft and construction. If Argo (see below) is made without any particular skill or love of the art, is a dully workmanlike coulda-been-a-TV-movie that seems to barely qualify as cinema, then Zero Dark Thirty -  viewing it only as a piece of visual art, without getting into questions of theme or politics or relation to reality or so forth - is somewhat of a triumph of the art of filmmaking. Nor is its content as objectionable as I thought it might be. I actually admired that it pulled no punches in depicting US torture of prisoners; the scenes of people being tortured are, while sanitized and simplified a bit, still very uncomfortable to watch. So they should be, especially coming from a highly distractable, ill-informed country so eager to forget what its done. I am not sure that the film doesn't, as its accusers say, validate that torture (a word seldom used by its characters, replaced by the more innocent-sounding phrase, "the detainee program"), by showing that it ultimately pays off - which I gather is somewhat of a fiction; based on what I've read online, the film is not that historically accurate - but I wasn't offended by it so much as I was... unimpressed; because whatever else might be said about Zero Dark Thirty, whatever obvious skill went into its making, it fails to really take any strong position at all on world-shaping, morality-defining events, and, pretty as it is, doesn't really amount to much. (It is not even a strong endorsement of torture, like, say, The Dark Knight - which at least has the courage of its immoral convictions - since it shows it as being so ugly and dehumanizing that we cringe from it, even if the film suggests that it works). Even if it could be proven (it probably can't, but IF) that  in the final estimation Zero Dark Thirty is more honest than not - it still isn't particularly brave, or passionate, or stimulating, or rich with ideas, beyond its straightfoward depiction of its (inaccurate) version of events. If it is a triumph of craftsmanship, it is also a waste of the same. It's not even that entertaining; certain scenes (the protracted final raid on Bin Laden's compound, seen mostly through night-vision goggles) were drawn out to the extent that they got my mother shouting "boring!" at our TV, and I have to admit that I could sympathize.

To confess, I also am a little more inclined to entertain non-mainstream versions (see here) of Osama Bin Laden's reported execution and the disposal of his body than I am about other aspects of the 9/11 narrative. The lack of information and images released to the press, the shiftiness, haste, and lack of public discussion that accompanied the alleged dumping-at-sea, the lack of any apparent desire to disprove theories that bin Laden died years ago, all scream that secrets were being kept, that the truth was not being told to us. I don't understand the film's utter lack of interest in such things, in its willingness to play along with authority. Zero Dark Thirty consolidates and endorses a comfortable official narrative about the hunt for "UBL," as he's called in the film, while failing to grapple with the most confusing and provocative part of the tale (no explanation is given or mention made of the alleged ocean disposal, and the leaked emails that suggest he was actually flown back to the US to be cremated are not touched on in the film at all, like Bigelow didn't even find this stuff curious, or worth mentioning). I should imagine 9/11 Truthers wouldn't like this film much. In fact, I should imagine anyone with any sort of passionate feelings about 9/11, the war on terror, and so forth will find Zero Dark Thirty a little too dispassionate, a little too cold, too safe, too hollow... Bigelow is a superb craftsman (craftsperson?) but there's something lacking from her vision, and from this film. 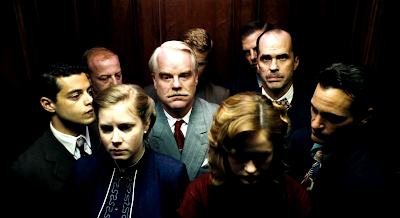 The Master is much the same. I didn't feel ANGRY with it, the way I did with There Will Be Blood, but I wasn't very excited by it. It's beautifully crafted, and very pretty to look at; it seems to be PT Anderson's Far From Heaven, since it evokes, in colour and lighting, the filmmaking practices of the time in which it is set. It also makes a surprising amount of sense of the Scientology master-narrative; I haven't dabbled deeply in that particular, uh, philosophy, beyond the sense of pre-judging it as pernicious gobbledygook, but for all of The Master's criticisms of the movement, the belief system articulated seems, though flaky, more compelling and coherent (especially if you take some of it metaphorically) than I ever expected it might be. Phil Seymour Hoffman is at his charismatic best, Joaquin Phoenix looks to have aged 20 years since his last film (and strangely resembles Daniel Day Lewis); and both are interesting to watch throughout. And that's about all the praise I can give it. Truth and wisdom and beauty can be found anywhere, if one looks hard enough, works hard enough, forces these qualities from the text; they can be wrung from  anything from soap commercials to sitcoms - but all the same, I don't think The Master has anything very profound or insightful or provocative to say about male relations, gurus, Scientology, or America, or anything else. It doesn't lack craft, but it does seem to lack content - or at least content that moved me very much.

Having given fairly negative reviews to both films, I must say, still, that I did enjoy watching both of them more than I expected I would. 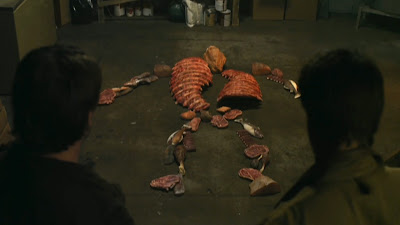 Alas, I enjoyed John Dies At The End somewhat less than I'd hoped. It starts off well enough - it gives a delightful, funny, inventive interpretation of the first third of the novel; and then omits the second third; and gives a very partial reading of the last. It's a fun film to watch, and I'll probably own a copy someday, but people who want to get maximum use-value out of the story it tells would do better to read the book than watch the movie; and people who have not yet read the book will probably find that it works better to see the film first - to move from the slighter text to the richer one, so the voyage is one of enhancement and discovery, rather than disappointment and diminishment (overheard in the Rio Theatre lobby: "it skipped, like, thirteen chapters of the book! What the fuck?" ...or words to that effect). All the same, thanks for the Rio Theatre for putting it on.
Posted by Allan MacInnis at 11:17 AM