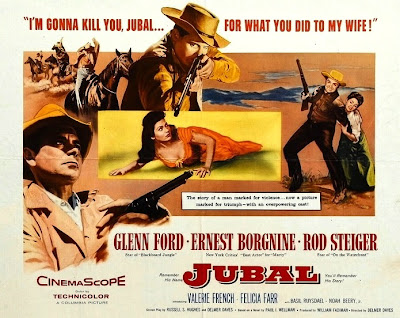 Late film historian and Japanese cinema expert Donald Richie, in the liner notes for the Criterion edition of Akira Kurosawa's Noh-influenced film adaptation of Macbeth, Throne of Blood, relates an amusing anecdote about the perils of translation for the purposes of subtitling. It involves the 1987 British film Wish You Were Here, about a rather potty-mouthed young British woman, played by a delightful young Emily Lloyd, who, if I recall, is particularly fond of the phrase "up your bum." She occasionally calls men with whom she dallies "buggers," as a generalized, playful insult. Apparently, according to Richie, the hapless Japanese translator, finding only one meaning of the noun form of "bugger" in the dictionary, translated the word as "okama" - basically a Japanese drag queen. Japanese audiences were apparently deeply confused, Richie writes, "by the many scenes of the foul-mouthed heroine being mounted by manly, rugged, ardent men whom, over and over again, at the top of her voice, she bafflingly called okama."

My apologies to the Japanese for laughing at this; rest assured, I'm the guy who regularly told shop clerks he didn't need a bath (furo), when he meant he didn't need a bag (fukuro) - an error he would also sometimes compound on those occasions when he wanted to be given a bag, which is far worse. Still, I take comedy where I find it; so when watching a Region 1 DVD of Jubal - a classic western starring Glenn Ford, Ernest Borgnine, and Rod Steiger - and noticing that it had, somewhat strangely, a Japanese subtitle option, I couldn't help but keep an eye out for moments that would be particularly ripe for mistranslation. One occurs early on: Glenn Ford, lost in the wilderness, has been rescued by ranchers, led by Borgnine; once they've got the cowpoke back to the ranch, to warm Ford up, Borgnine instructs his cowhands to "give him a cup of coffee - and put a slug in it!"

One could imagine this line provoking some very strange misconceptions about western folk remedies among Japanese viewers, if mistranslated. I really wish I were a whole lot better at reading Japanese, so I could see if they got it right; I'd also be very curious to see what the subtitlers made of a brilliant double entendre from later in the film. Borgnine's wife, Mae - played by Valerie French - is a faithless, dissatisfied young woman, tired of her husband's hammy gropings and general goodnatured vulgarity. When Ford is hired on to help at the ranch, she comes to him in the barn on the pretext of getting firewood, and throws himself at him. He's a virtuous man, grateful to Borgnine, and rebuffs her, but Steiger - the film's heavy - sees this; because she'd previously taken him for a roll in the hay, he confronts her with his own crude advances, saying, "time was, when you needed wood, I was the man you came to."

Given that the film is from 1956, I may be reading too much into this turn of phrase, but having been surprised out of my socks by those cab-drivin' dykes in 1957's Crime of Passion -- see below -- I am prepared to believe that this was an especially clever bit of writing... but I wonder how it fares in Japanese?

Jubal is pretty good, by the by, with gorgeous technicolour landscapes and a terrific cast, also featuring Charles Bronson, Noah Beery Jr, and Jack Elam. The story - which has the likable, guileless Borgnine being tricked into turning on the virtuous born loser Ford by the conniving Steiger - is described as a "western reworking of Othello" on its Wikipedia page, though I think that's stretching it a little (Steiger, unlike Iago, is neither the main character nor narrator, nor is he particularly appealing in his villainy; Borgnine is more a good-natured boob than a tragic hero; Ford corresponds to Cassio, a minor character in the play but the main character in the film; Desdemona is actually virtuous, while Mae is a bit of a tramp; and Iago wasn't motivated by jealousy over his own past romps with Desdemona, that I recall... It's a very loose reworking, if a reworking at all; I guess I might concede the adjective "Shakespearean," but it still seems to sit a bit oddly). Director Delmer Daves is a man with an interesting filmography indeed; seeing Jubal makes me want to revisit Broken Arrow and Daves' other classic with Ford, the original 3:10 To Yuma. Jubal is slated for a Criterion edition later this spring, which will no doubt look even better than the version I just watched... 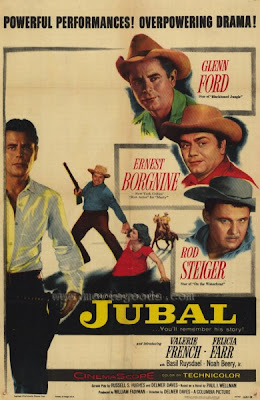