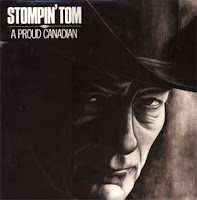 In respect of the passing, at age 77, of Stompin' Tom Connors, I want to share a lesson plan I cooked up for use in intermediate ESL classrooms, using one of his songs, "Roving All Over The Land." Ideally anyone who uses it should get their school to pay some money to the Connors estate! (You don't need to pay me anything; consider my part in this a freebie).  It covers several bases - from introducing some Canadian culture to the classroom to practising listening, reading, decoding, and discussion skills.

The first part is pretty basic. You prep the class to listen for the missing words in the song by getting them to repeat them after you. Then you play the song twice and have them fill in the blanks; then go through and check their answers. It gets more interesting in part two! (The whole exercise can take upwards of 40 minutes).

Stompin’ Tom Connors: “Roving All Over the Land”

The second part of the lesson is where it gets interesting. You assign the students to work in groups. ESL students are terrifically over-dependent on their dictionaries, which they generally don't use very skillfully, grabbing at words and definitions irrespective of context, conjugations, and so forth, and often coming up with the wrong one. One point of the following lesson is to teach them that they can actually figure out word meanings without dictionaries, by careful reading, paying attention to contextual clues, and doing some creative thinking.

To illustrate, you can ask them what an "otter" might be, calling their attention to the word in the song. We know from the third verse that the otter is by a river; that it is lively; and that it plays. Ask the class what sorts of things PLAY. You'll get various answers - musicians, radios, children, animals, and so forth. You can help them think through the likelihood of any one possibility being right as they come up, asking them if other clues in the song support the guesses; but put them all on the board. To show them how they might want to think about the task, you can call attention to the parallel structure in the song between the otter playing and the cattle grazing; you might want to check in to see if anyone knows what cattle are, and if not, you can tip a hint that cattle are cows. Eventually, more creative/ gifted students in the class would generally figure out that otters are animals of some sort; that they probably aren't radios, that children and musicians don't really fit the context. It is unlikely that they will get any further than figuring that otters are animals, but it still should be enough to make them aware that they can probably DO the following exercise if they try. Prizes can definitely help motivate them!

Once you've set up the activity, here's part two:

DO NOT USE YOUR DICTIONARIES:

From reading the lyrics to the song, what do you think the following words mean:

Finally: what does it mean to “thumb your way along?”

Motivated by a prize or such, students SHOULD be able to come up with guesses; you can go around and offer suggestions, as needed. Assigning it as a group task gets them to discuss their guesses with each other (in English!) and can help build confidence in communicating, even if they get the answers wrong. It may help if you read back through the song with the students to call attention to the context; "flattop" is a particularly interesting word, in that it has a meaning unfamiliar even to most English speakers, but can be easily decoded by looking at the three instances in the song, and being attentive to related words.

Afterwards, depending on the class, there's all sorts of room for discussion on topics like travel, hitchhiking, the singer's attitude toward Canada and the Canadian landscape, and how the song might have been different  if it had been written in the student's home country, the students' own experiences of the Canadian landscape, and, indeed, popular folk songs. You could even assign them to write their own version of the song, using cultural clues from their own country...!

Depending on the presence or absence of Muslims in the class, the "bacon sandwich" can also be exploited productively; I personally used to love bacon and ketchup on toast. Earlier in my childhood, I would get my Dad to cut off the crusts, and make me a chocolate milkshake to go with it. A favourite snack of my youth...

My respects to Stompin' Tom Connors, for his many wonderful songs. He joins the list of folk musicians I have always wanted to see, but never seized the opportunity, and his passing thus increases the likelihood that I might show up the next time John Prine, Loudon Wainwright, or Kris Kristofferson comes through town...
Posted by Allan MacInnis at 11:32 PM

Great idea! I'm going to use with my students this evening--thank you!