Ken Russell's The Devils - there is news!

It turns out that there has been news in regard Ken Russell's hard-to-see The Devils - a film based on historical events which documents the misuse of  church power and the persecution and martyrdom of a somewhat debauched priest, played by Oliver Reed. Film geeks have been waiting for years for an official DVD release. Long-censored footage, previously considered lost, of orgying nuns molesting a life-sized Christ on the cross (the so-called "rape of Christ" scene) was reinstated for a highly watchable bootleg that came out a few years ago, but it was of variable quality and aspect ratio, and still missing the scene where Vanessa Redgrave, as a mentally disturbed, sexually fixated nun masturbates with a rather phallic chunk of charred human thighbone. A lot of discussion has been on whether Warners would ever "have the guts" to release the full film - a discussion that presumes that it's the controversy around these censored elements in the film, and the film's critique of religious hypocrisy, that has kept them from getting on board, which may or may not be the case; I actually don't see how the film - which attacks hypocrisy in the name of God and the misuse of power, not God or faith or the idea of belief - as blasphemous in any way, and can't see how (unless one is pro-hypocrisy) it could be regarded as a threat to ANY person of faith, however disrespectful it might be from an idolator's point of view... It's funny what some people are scared of...

Well, here's the news, for anyone who missed it (as I did, until late last night): in 2010, Warners DID release the film - in Spain and very, very briefly on iTunes. Reports online suggest that this is a great-looking release in the proper aspect ratio, but still abbreviated, running 103 minutes. Whether PAL speedup has anything to do with this or not hasn't been noted, but 103 minutes is the length given for the censored cut; longer versions, including the "rape of Christ," run between 108 and 111 minutes, and reports online state that this footage is still missing. It is, of course, highly unfortunate, that Warners, who COULD release the complete film, are choosing to go with a censored cut; but as with other botched DVD releases of recent years (the Zabriskie Point with the shitty Roy Orbison song tacked onto the end credits; the Performance with the missing line of dialogue; the highly abbreviated, dubbed, mangled version of Burn!) this may be the only official release we're going to get, unless someone at Warners catches a rare case of courage.

Meantime, it turns out that what appears to be the same release as the Spanish is now available in region free NTSC through Korea. The box art below is from the Korean edition, as sold on eBay. Note the misspelling of the director's name! (Nothing new there - my version of The Brood from Korea is directed by someone named "David Cronenberc"). I've got this on order and will weigh in presently as to whether any missing footage has been reinstated. 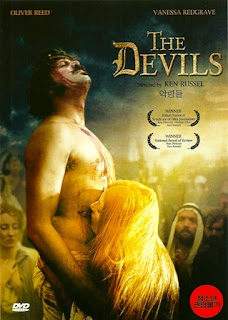 Did you check out this Korean DVD yet? I assume it is censored but how badly?

"Censored" is a relative thing when it comes to this film but as far as I could see it is *identical* to the BFI version that came out. Except there are no extras and it's a lot cheaper. There's no pubic fogging and nothing was missing that I could spot - I think it's the best value when it comes to buying this movie until someone puts the Rape of Christ back.

Fantastic, I was worried it would be the Spanish edition. Shame about the lack of extras, though. Hows the quality of it?

It's okay. All Korean DVDs I've bought have been decent, except for a crappy Cannibal Holocaust and a censored Verhoeven Fourth Man, which comes minus that startling cock shot at the start. Their Beau Travail is full-frame, too. They tend not to have extras, they tend to not have copy protection (raising the question if they're legit; the Korean vendors on eBay say so but I can't guarantee it). I'm not a huge quibbler about image quality, though - if I can get a film I like in the correct aspect ratio on the cheap, that's usually enough to make me happy, unless it really looks like crap.

BTW, I'm not 100% sure, since I don't know the Spanish edition,but I gather it was "heavily cut," and I *think* I would have noticed if this were, since I've seen the film many times. But I only have played this particular DVD once!

There are legitimate Korean releases out there (I have owned many over the years) but the online stores I used to use all seem to have vanished :(

From your comments I assume the Korean "Devils" is widescreen? I haven't seen the film but I am very interested in doing so, and refuse to get the bootleg copy from VHS thats available.

The bootleg - at least the one I have - is pretty essential, actually, since it does have SOME of the censored material not present in the BFI and Korean releases. With it being unlikely that WB will ever put those scenes back in the film, they're the only way to see them. It has lots of extras, too. Sure, it's a TV rip, and sourced from variable quality, but I would recommend getting both it AND the Korean, until such a time as a proper release happens.

Arggh: sorry, GJ, but at the behest of a correspondent, I checked the runtime and apparently the Korean version of The Devils IS a censored US cut of the film, no doubt the same as the Spanish DVD. At NTSC, it plays to 1:43:20, as opposed to the 1:51 of the PAL-formatted BFI release. Annoyed that I hadn't realized I was watching a censored version of the film!

The information on the back of the box is incoherent (the film is described as "4:3 Latterbox," the audio as "2.0 surround") but it IS widescreen; however the Spanish PAL release was NOT enhanced for widescreen TVs, so apparently this one isn't, either. Someone buy me a widescreen TV and I'll test it...

Video Watchdog's Tim Lucas on the Spanish cut of The Devils here. Presumably all this applies:
http://videowatchdog.blogspot.ca/2010/09/devils-spanish-dvd-report.html

Thanks for letting me know, I didn't order it yet!
You check check if a disc is 16x9 enhanced or not without having a widescreen TV. Just set your DVD player's screen type to 16x9 and if the video plays back stretched, you know its anamorphic.

By the way - adding more confusion to matters - I was a little muddled in the previous. The 1:51 BFI release is given in NTSC times, even though the film is PAL. (Someone did the math). So that's the longest length of the film available officially - minus The Rape of Christ et alia. And the Korean DVD is apparently missing eight minutes, from somewhere...

I'll get the UK version - I hate PAL speedup but at least its got some nice extras and a good transfer. Knowing my luck they'll release the extended version right afterwards but if my purchase helps tempt fate, then so be it!