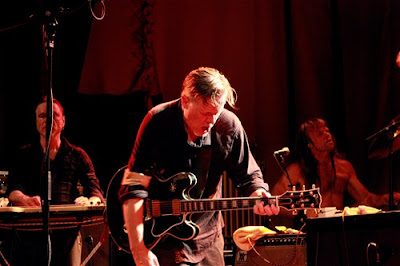 With apologies to The Rebel Spell (whom I know well and love - their new album is great!) and Man or Astroman? (whose music I barely know, but based on their Myspace, find amusing - and check out these photos!), I once again declare that Swans at the Rickshaw is The Gig To Be At tonight. It's a rare chance - perhaps the only one Vancouverites will ever have - to see one of the most daring bands of 1980's New York - a band who stripped rock down to primitive, harsh essentials, with oft-transgressive, memorable lyrics, like, say, those to "Raping a Slave" - performing live, touring what many critics agree is one of the strongest, heaviest (post?-rock) albums of 2010. Look below for a link to Michael Gira's interview with Nardwuar (no foolin'!). See you at the Rickshaw!
Posted by Allan MacInnis at 6:15 AM