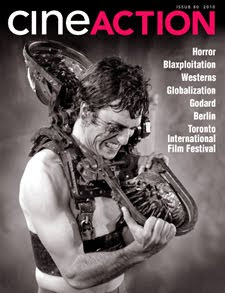 To begin, a confession (a sincere film recommend-ation will follow.) I rather enjoy the Saw movies, and, worse, can offer no clever critical retort for people who think the entire lot of them are trash.

In an article in CineAction 80, Gregory A. Burris makes a very good case for taking the Hostel series seriously, from a liberal point of view, but dismisses the Saw films as reactionary and conservative, simultaneously pandering to a puritanical moralizing element in American culture and a nasty streak of voyeuristic sadism. One feels, from Burris' vantage, that the Saw series is about as defensible as public executions. He may have a point. While I agree with him about the greater merits of the Hostel films (though I think he does an injustice to Hostel 2), and could, perhaps, augment his defence of them with a few arguments of my own, I have no defence at all of the Saw films to offer at present. Are they really just "torture porn?" Can they possibly withstand enlightened inspection? Is my failure to come to terms with them critically the result of a desire to avoid facing the embarrassing truth? Am I enjoying having my worst impulses "pandered" to, in the time-honoured tradition of fans of Clint Eastwood, Arnold Schwarzenegger, Bruce Willis, and football? For someone who holds the 24 series in contempt as reactionary, dangerous crap - or at the very least, morally and politically suspect - am I not also obliged to reject the Saw series, as well?

Maybe. I haven't gotten very far in my thinking about them, I'll admit. As embarrassing as it is for me to confess, I've been watching them because, um, they amuse me and make for compelling viewing; I enjoy the strong reactions they provoke, the cleverness of the traps, the relative skill and positive daring of the gore effects, and the freshness of them as cinema - because nothing quite like them exists in horror cinema (though perhaps, in addition to 24, there are occasional echoes of Se7en, Cube, and The Abominable Dr. Phibes). I like them, in part, because I don't fully understand WHY I like them; it titillates me, even tho' I fear that if I asked too many questions, my pleasure would crumble. In fact, I enjoy the experience of watching them sufficiently - have found them so curious and strangely engaging - that I've come back time and again. To date, I've seen six out of seven of the Saw movies; I watched I-V in sequence, missed VI, and caught up with the seventh and allegedly final chapter of the series, which was a disappointment. I have now gone back, and am at the moment about halfway through VI - it is paused on my DVD player as I write. I must say: I am loving it.

Accordingly, Saw VI is the film I wish to tell people about. It stands head-and-shoulders above most of the other Saw films, because, as other critics have observed, it's actually about something. 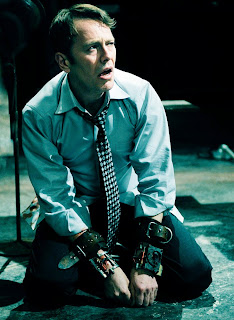 Unlike other episodes of Saw, where it often feels like the moral failings of the characters reflect back on themselves alone, avoiding any institutional or political readings, Saw VI has a meaningful target: the American health care system, and the role private insurance companies play in it. (Another critic has quipped that it would make a good double bill with Michael Moore's Sicko; it's an obvious but true comment, and reveals how unique the film is among recent horror films). Furthermore, the film is anchored by a highly talented Canadian actor, Peter Outerbridge, best known (to me, anyhow) as Molly Parker's love interest in Kissed and as a sexually complex poet in Paris, France. In both of those films, there is something slightly untrustworthy and reptilian about Outerbridge, a moral ambiguity in his features and delivery that makes his presence slightly unsettling, "creepy;" he is attractive and repellent at the same time. Who better, then, to play the role of a ruthless insurance executive caught in one of Jigsaw's traps? (...We have to be attracted enough to him to care about his fate, and yet convinced enough of his moral failings to not object overly much to seeing him toyed with, tortured, and very likely killed). I wouldn't, without embarrassment, heartily recommend any other films in the series, at least in public (which is unfortunate, because it really does help to know who the recurring characters are before launching into this film). But for those who are at all curious - fans of horror cinema, and especially horror cinema with political ramifications - Saw VI is well worth a look, a much, much more interesting entry in the series than the current one. One feels that of all the series, even Robin Wood himself - who, as Burris notes, rather unfairly dismissed these so-called "torture porn" films out of hand, having seen only one or two of them - would be able to get on-side.
Posted by Allan MacInnis at 7:56 PM