Petunia and the Vipers, February 18th 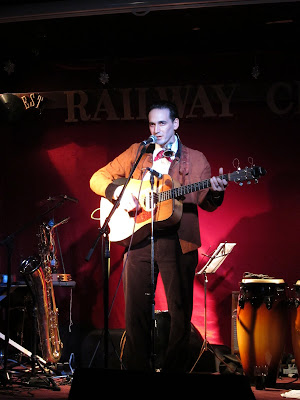 Petunia at the Railway, photo by Lee Shoal, not to be re-used without permission


Roots musician Petunia was in fine form during his solo set at the Creaking Planks' anniversary show a couple of weeks ago. He's been touring and travellin', workin' on a new record, and might just end up permanently relocated soon, given the amount of time he's spending away from Vancouver - so if you haven't seen him yet, and you're fond of authentic Jimmie Rodgers/ Hank Williams-style country music, with perhaps a slightly morbid & hyperreal twist, it might be a good idea to head down to the St. James Community Hall, at Trutch and 10th, on Friday the 18th, starting at 8pm, to catch his first Canadian show with his "West Coast band" The Vipers since last April. The Vipers, for this incarnation, are Petunia, Stephen Nikleva (electric guitar), Jimmy Roy (lapsteel guitar), Sam Shoichet (stand up bass) and Marc L'Esperance on drums.
From the press release, here is what Petunia & the Vipers have to say about this show:

"We finally get to play a place with a great big dance floor, excellent sight lines, good lighting, great acoustics and excellent atmosphere. It's not too late, not too early. Starts at 8pm.

"We are producing the show ourselves and organizing everything. This is how we would like to do our shows here in Vancouver.

"South of the border we have been getting great reviews and we pack the place out every month just an hour away in Bellingham, WA. Americans love what we do and have been showing it by supporting our tours down south all the way to Los Angeles. We'll be heading as far as Texas next winter...on the heels of our Vinyl Record release tour in September, 2011.

"We are proud to finally be able to present ourselves in Canada the way we think it should be done, on our own steam and on our own turf. In Canada! Come on down, it's Valentine week. Bring a date. Bring your dancing shoes, we're going to have a ball!"
Posted by Allan MacInnis at 11:55 PM