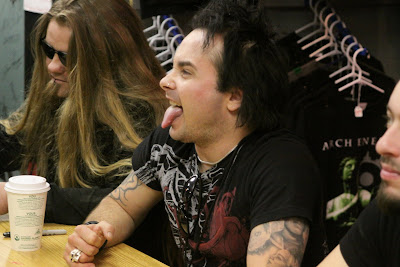 Cradle of Filth signing by Bev Davies, not to be reused without permission

Went to see Cradle of Filth today - at the signing at Scrape, earlier, and then for their show at the Commodore. A wee bit of constructive criticism, to whom it may concern: while I understand that circumstances weren't optimum, as soon as anyone had the idea that the band weren't coming back to do an encore, to fill out what was supposed to be another half hour of performance, some bad vibes could have been averted if someone had announced that Dani wasn't feeling well, rather than keeping the house lights down and allowing suspense to build... because, in lieu of such announcement, the way things went down - people waited eagerly, and cheered and cheered and cheered, and chanted "Cradle," and built themselves into a state of heightened expectation, fully expecting that their long wait would be rewarded with at least a "Lord Abortion"... The dawning realization that the band wasn't coming back made the more, um, aggressive fans turn a bit ugly, with testosterone-loaded chants from the pit of "What the fuck" and then, ultimately "bullshit!" lasting a few minutes each. When someone finally DID make the announcement (from the margins of the stage, lest he get pelted with something; no idiot, he) - telling us that Dani was sick, and had "tried really hard," but that the show was over - one fan I spoke to suggested this was a lie: "It's a rip off, they just didn't feel like playing anymore," or words to that effect.
While I understand his disappointment, personally, for what it's worth, I think that Dani actually was sick, because - about ten minutes prior to the announcement from the stage, someone at the merch table assured me that Dani had been up puking all night, the night before. From a great remove from the stage, she could guess what was going on long before anybody had the guts to tell the crowd. Also, the band were quite generous earlier in the day with fans at Scrape, signing multiple copies of a vast array of items (CDs, LPs, a Cradle of Fear DVD, no doubt a few shirts, and even a guitar!) - which they did for nearly an hour, until all fans got what they came for. A band that does that for their fans doesn't call a show short for nothing; Occam's Razor cuts in the Cradle's favour, in this case, and I think the "Christian" thing to do would be to applaud Dani for delivering for as long as he did.
Does Cradle of Filth WANT us to do the Christian thing, though?
Anyhow, the band did do excellent verions of "Lilith Immaculate" - the catchiest tune on their new release, Darkly, Darkly, Venus Aversea - as well as a "fast song - for the boys out there," "The Principle of Evil Made Flesh," which no doubt was a high point for true devotees. My signed Midian LP goes a ways towards making up for things, too.
Observation: might be wrong, but punks in mosh pits don't push each other around quite the same way moshers in metal shows do (or at least metal shows of this somewhat "less underground" variety; I know from experience that Theocide fans, say, know how to mosh). Tonight, a lot of these guys' idea of moshing was standing on the margins of the pit and shoving people who came close to them - not self-protectively, it seemed, but for the sheer Joy of Shoving. It was a bit of a meathead pit...
Posted by Allan MacInnis at 12:37 AM

I was at the scrape records signing, which was a very warm and friendly event, My husband had his seven string guitar signed, I had my limited edition 4 CD slipcase signed; and Dani was generous enough to not only ALLOW me have 3 pictures taken with him; he also went out of his way to stand up, lean across the signing table, put his arm around me (cheek to cheek ☺♥) And patiently wait while the photos were being taken ( and then generously waited while they were re-taken because they blurred!!♥)

Not surprisingly, Even at that point during the evening, he didn't appear to be feeling all that well, but he still managed to remain warm and personable to everyone who came down for the signing. Now, As for the abrupt ending to the concert- Think about it; With all of that leather, makeup, hot stage lighting, running around on stage, while belting out such high intensity, physically demanding vocals- It's no surprise that he had to end the set early! All of those factors are strenuous on the body even when it's 100% healthy. Can you imagine how uncomfortable it would be if a person were sick? Yikes!!

Anyways; I personally believe that he did as much as he could handle, and I very much appreciate that such an effort was made to give us fans the best show he could even though he was ill. so I say: "Thank you!" To the entire band!!! But Especially to Dani For sticking it out as long as he could!!! ♥♥♥