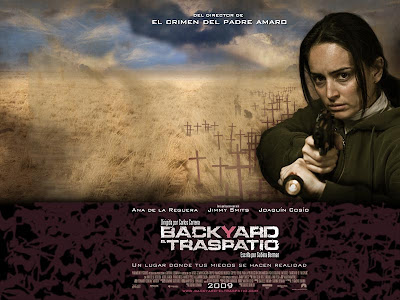 Backyard (official site here, in Spanish) will likely prove one of the more entertaining, large-scale entries in this years' VIFF; it's a bigger budgeted film, with excellent plotting, slick visuals, and a fairly conventional, but effective story of a cop gone renegade in pursuit of justice - with the twist that here, the cop is a female. I wouldn't be surprised if - despite some disturbing content - it ended up an audience favourite this year. The director is Carlos Carrera, who made The Crime Of Father Amaro; the film is a police procedural based on real statistics of murdered women in Juarez, Mexico, and the politics that keep their deaths from being investigated properly. Enter Detective Blanca Brava (Ana de la Reguera), who trusts her gut, bends the rules, and almost immediately upon beginning her investigations, arrests a suspect on flimsy charges and keeps him in jail longer than she has any right to (police procedure in Mexico apparently allows for a certain degree of creative freedom). More bodies turn up while the suspect is under arrest - but it develops that their corpses had been frozen and preserved, as if someone has been waiting to dump them to provide his friend an alibi; and thus more powerful people are implicated, as are, eventually, police chiefs and government officials who don't want to taint their city's name by making a fuss. As you might already have realized, the film has immediate relevancy to post-Pickton Vancouver and the deaths of sex trade workers here, which alone is reason to see it. As thrillers are wont to do, the film does tend to a degree of hyperbole and simplification - there's one rather extreme scene where Detective Blanca, exploring a mysterious underground freezer, hallucinates that it's filled with the murdered corpses of women, hanging from their feet - but it is effective no less, and sometimes hyperbole and simplification are necessary to bring underlying political realities to the surface. Besides, the "renegade cop" formula has been so often used to the ends of reactionary right wing politics that it won't really hurt anyone if for once Mexican women and feminists (male or female) get to reap its benefits...
Posted by Allan MacInnis at 11:11 PM