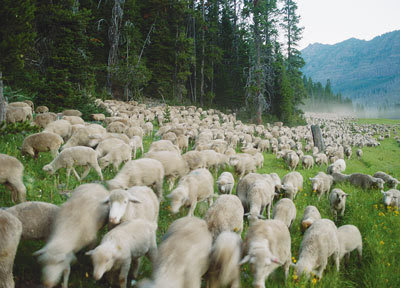 Sweetgrass (official site here) is designed as an "elegy" for a fading way of life, since, titles at the end explain, the sheep we see throughout the film are apparently the last group to be driven the 150 miles through the Beartooth Mountains for summer pasture. Without music or narration, Sweetgrass shows us the lives of these sheep - being born, being shorn, being fed, being herded - and the cowboys who work them. There's not much drama to be found (though the cowboys encounter a bit of bear trouble in the mountains at one point); there's also no footage of animals being slaughtered, rest assured (though there is one casualty of a bear attack shown). However - and this is what I come to films like this for - some images are achingly beautiful: a shot of sunlight coming through the mist in the morning as sheep graze in a forest, for instance - with only their baaing, bells, and a bit of birdsong on the soundtrack - has a transcendent, hypnotic quality to it, as do many scenes of the Montana landscapes, such as the shadow of clouds moving over mountains and fields. There's fascination, too, to just watching the sheep, when the camera gets up close to let us observe their behaviour. If I have a quibble with the film, it's that I wished certain of these shots had lasted longer - that I might bliss out in scopophilic ecstacy, as I do when watching the films of James Benning, say, forgetting about the sheep and the cowboys and just disappearing into attentiveness to sound, colour, rhythm, and form - feasting on the opportunity for perception, using the sheep and the natural imagery as a sort of pretext for meditation. Instead, we cut away from many of the most beautiful and compelling images to something more narrative - showing a cowboy sheathing a newborn, motherless lamb into the skin of a dead lamb - sort of a lamby jumpsuit - so that the dead lamb's mother will accept it and let it suckle; or showing a cowboy sleeping under a tree with his hat over his face. I was less interested, ultimately, in these passages, less interested in the "story" than certain of the images. Still, people who like quiet cinema - or people who might be inclined to mourn the passing of old-fashioned methods of farming and shepherding - will likely find Sweetgrass a valuable experience. 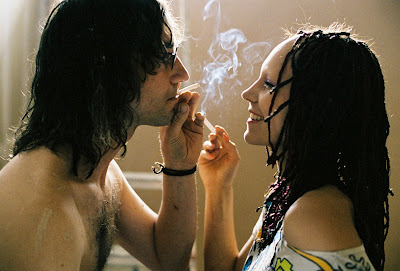 Kill Daddy Goodnight, the new film by Michael Glawogger - whose documentary Workingman's Death is one of my favourite docs of all time - is a fictional feature, but one that touches on important, and very real, issues - like the relationship of young Austrians to past generations (including corrupt socialists and, further back, Nazis). The film takes its time to set up the relationships it wants to explore, and has a digressive, slightly disjointed quality, jumping from the 1959 testimony of a Lithuanian Jew against a Nazi who participated in a pogrom that killed his father, to the story of a young university student, Ratz, and his troubled relationship with his own father, amidst the decline of socialism in the 1980's, to the adult Ratz's trip to New York, where his story connects with that of said Nazi, now in hiding in the basement of a house belonging to the family of Ratz' love interest. Along the way there are various themes raised that aren't really developed (incest between Ratz and his sister, say, or his mother's alcoholism). As with Slumming, the previous fictional feature of Glawogger's I've seen, there is a sense that the filmmaker is a documentarian at heart and can't resist taking time to linger on images he finds captivating - like a car driving behind a snowplow in a snowstorm - though they in no way advance the story. There's a streak of perverse playfulness in him, too: for example, that the love interest has a rare condition that leaves her with no body hair or hair on her head seems a detail thrown in so that Glawogger can have her wear a different wig in every scene, or insert shots of her naked, bald, and hairless, looking rather like something out of The Man Who Fell To Earth. None of this is necessarily bad, since when Glawogger chooses to linger on an image or indulge a whim, it can lead to striking cinema indeed, and his willingness to take risks has plentiful payoffs and surprises (as when images from Ratz' proposed patricidal video game intrude into his consciousness; or as, when he meets a video game marketer we are meant to feel disdain for, Glawogger takes time to show us the marketer's dog shitting in a park); but they call for a film that has a loose enough theme and structure to allow him these indulgences - something open-ended and exploratory, like Slumming, which was far more successful. There are bits of the film that do work, as when Ratz confronts the old Nazi about his past, but overall you get the feeling that Glawogger was not quite in control of his material. Links to other reviews of the film can be found here, on the distributor's page; the Indiewire review of the film, more critical than the others and thus quoted more guardedly, is closest to my own perception of the film, and can be read in full here. 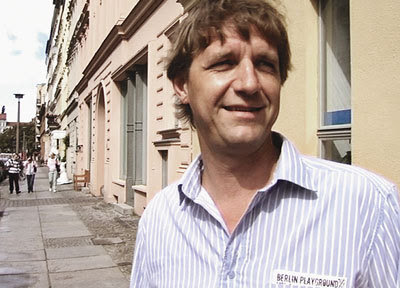 Less ambitious, but more successful (on its own terms) than either of these films is Berlin Playground, a documentary about former East German punk rocker Hans Narva, whose music I did not know before watching the film. I *think* I've heard of The Inchtabokatables, one of the bands Narva played bass for; I know I have not heard of the recently-reformed Herbst In Peking, Project Skull, or The Crack Up Collective (there are others, too). The film isn't really so much about Hans Narva's contributions to East German punk rock, however - or moody, arty postrock, in the vein of The Ex, perhaps, which is what he makes now - as it is an opportunity to contemplate the changes brought about by the fall of the Berlin Wall and the arrival of capitalism - as seen through the eyes of a slightly brattish and cynical, but engaging and likable, raconteur. Narva - awaiting jail time for being caught repeatedly driving drunk without a license - walks the film crew through various places of importance to him before the wall fell and "The West" arrived with its temptations - like a prison he served time in that is now shamelessly converted to apartment complexes, or the forest adjoining his mother's backyard, where he claims the Stasi used to torture people, or the alleyway that was part of his escape route when he and his equally desperate (and equally incompetent) buddies decided to rob an armored car. These stories are often offered with a shrug and a self-deprecating smile; he seems to be bemused by his own nostalgia for the bad old days that shaped him, and none too impressed with the freedoms the fall of the Wall heralded. I'm not going to rush out and try to find a Herbst In Peking album based on what I heard in Berlin Playground, nor will I be seeking this film out for my collection once it appears on DVD... but I enjoyed the time with Narva and the glimpse his stories gave me into life in Berlin then and now, and imagine VIFF audiences will, too. Sometimes small is good.