Torture Chamber Choir make the scene (aka, "...and thanks, Dan!") 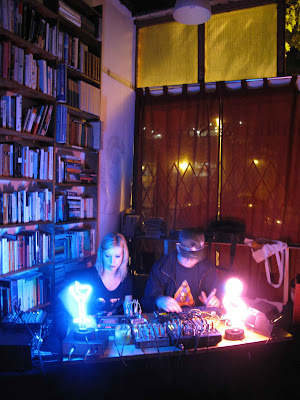 Torture Chamber Choir, pics by Kevin; not to be used without permission

I missed many gigs because of this move, needless to say. The Subhumans doing one of the last big gigs at the Cobalt, as part of the booklaunch for Chris Walter's (very funny and readable) Punch The Boss (which I helped proofread?): I missed it. The Pack AD and Pink Mountaintops at The Rickshaw on Sunday? Missed it. Jeffrey Lewis at the same spot on Monday? Missed it. Tonight, the last night for Fake Jazz Wednesdays at the Cobalt? Missing it RIGHT NOW, as a matter of fact. And LAST night, at Solder and Sons, while I was cleaning up abundant mouse poo from my kitchen - because it isn't just bedbugs in the building - I missed the Torture Chamber Choir's first live performance ever, at Solder and Sons (whose webpage appears to be down, but they're right across from the cop shop on Main Street), which, if you like a younger crowd doing experimental electronica, minimal improv, and so forth, is a fantastic place to see music (since the audience tends to actually be quiet, which is condusive to attentive listening - which is rare at many gigs in this city, unfortunately; supportive tho' I try to be, I've seldom ever really dug Fake Jazz at the 'balt, because the ambience is barlike and noisy and there's lots of talking drinkers/ drinking talkers; but Solder and Sons is primarily a bookstore. Perfect! Especially keep your eye out for anything involving Glaciers (or its members) there: Glaciers is the very exciting trio of Lief Hall, formerly of The Mutators, Solder and Sons (Myspace-pageless) proprietor Robert Pedersen on electronics, and percussionist Jeffrey Allport - probably one of the most gifted improvisers in Vancouver, who, incidentally, is part of the lineup for the December Jandek gig in town - you've heard about that, right? Josh Stevenson - another of our most gifted improvisers - is also in the band, on synths, and Rachael Wadham (on zither) and Wendy Atkinson (on bass).

As for Torture Chamber Choir, it's Dan Kibke of G42 and Ejaculation Death Rattle, on "synthesizer, electronics, abd photocell" and Emma Tomic, on Sardine-o-tron, Gristleizer, and photocell." With members of EDR dispersing for a bit to explore side-projects, this is, I believe, Dan's main area of focus at the moment. He tells me that "we're going to be adding more instrumentation. At the moment, it's a bit free-form, but the objective is to have something of a more structured 'song' format than you're usually used to hearing from me." I wasn't actually AT the gig last night, but a bunch of cool people were; attendees included Ross Birdwise - whom I gather has also been doing stuff with Yellowthief's Poib Fehr - and both Sean and Shon of EDR (one of whom I believe is now also doing stuff with Noobie Noobinson), and Harlow, aka Sistrenatus (also of Funerary Call) - one of Vancouver's least locally appreciated dark ambient/ industrial/ black metal/ noise sculptors (tho' he has had CDs released in France and the UK - go figure!). Chris Towers of The New Creation came out - I consider it one of my great coups of my meddlings on the Vancouver music scene that I've hooked Chris up with people who are making and playing music (to say nothing of that performance I talked him into doing for my last birthday). Also in attendance was the very Kevin who helped me with my move (thanks, man!) as well as Melodic Energy Commission's Theremin player, George McDonald (!). (Melodic Energy Commission are noted outside of Vancouver for their past collaborations with Del Dettmar of Hawkwind; see my old MEC interview, originally done for Discorder, here).

...all of which is part of a roundabout way of welcoming Torture Chamber Choir to Vancouver's flourishing underground music scene, and to thank Dan for organizing an Al-appreciation party for me the other week (which some of the people above attended, as well as Femke, Lee Shoal of the Creaking Planks, and... others. I'm running out of stamina to post Myspace links, sorry. Thanks to Kyla for hosting, too!). It was good to get a bit drunk and mellow and relax with some of these folks, because I'm not going to be around as much; commuting home from late gigs is going to be next to impossible, so posts like the above, where I enthuse about live local music, may be coming somewhat to an end...

But we will persist in some form or other. Thanks to all the people above whose music I've enjoyed, actually. I'll miss seeing shows a lot. And thanks again, Dan, for the party! It was a great night.

By the way, while neither EDR nor the Torture Chamber Choir have any releases planned, there's some good news, G42-wise: Dan tells me that David Abfackeln is working on one or maybe two new CDs, some of material dating back eight or nine years; so keep your ears peeled! 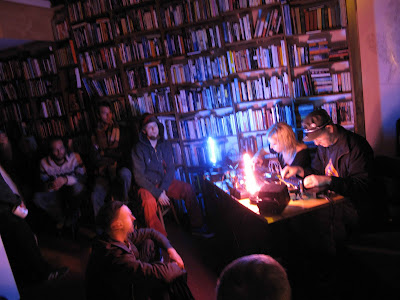 Torture Chamber Choir, pics by Kevin; not to be used without permission
Posted by Allan MacInnis at 9:44 PM