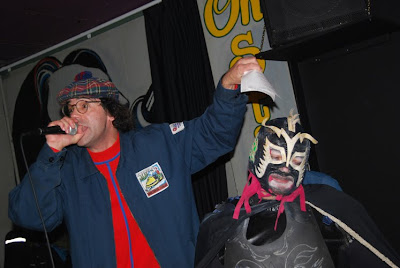 Nardwuar and Thor, by Femke Van Delft. Not to be used without persimmons.

I just saw the funniest thing in my kitchen today - almost unbelievable, really. I guess my mouse must have shimmied its way up a power cord that I'd left carelessly dangling on the floor, to get to my (normally mouse-free) kitchen counter - because as I came into the kitchen, when I turned to the area where the mouse was, it panicked and did a fucking BACKFLIP, either off the counter or the cord, into the air. I stood there stunned, watching this brown thing arcing in space before my eyes, before it fell to the floor and scurried quickly under my fridge (its chosen refuge). Quite the acrobatic feat, for a household rodent. For a second there, I'd thought someone had thrown something at me.
I move out at the end of the month. Packing looms. I tried to photograph the mouse poo on top of my fridge as an illustration for this piece, but then my digital camera broke. It's been a rough couple of months.
Anyhow... If all goes as planned, Nardwuar is going to be interviewing Justin Sullivan of the New Model Army on CiTR today (ie, Friday). His show starts at 4PM - the interview will happen sometime thereafter; you can tune in online, if you like.
My previous big interview with Justin is somewhere below. My next interview with him will appear in the next Skinny, along with some VIFF reviews (see Taqwacore! More on that later). I currently have a little blurb with him to run along the big Motorhead piece I did.
Speaking of interviews, that interview with Nardwuar that almost made it online here is in Mongrel Zine #6, available at stores like Scratch and Zulu. And I bet Red Cat.
I rather fear that Nardwuar is going to beeline straight for the fact that Justin lost his virginity in Vancouver, many years ago. Justin may well already regret having told me that - but that's nothin' like Nardwuar knowin'. Frankly, I am not sure Justin is prepared for being interviewed by Nardwuar. I am a bit nervous, since I set things up. It's kinda like introducing two friends you know who have very, very different personalities - something that always makes me nervous, y'know? But having spoken to Justin twice at some length, I am very curious to see what Nardwuar gets out of him that I haven't! 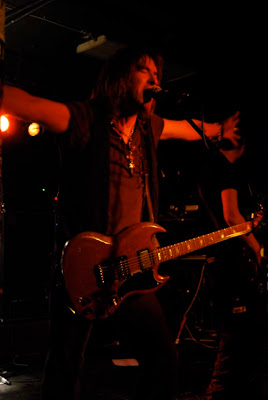 Posted by Allan MacInnis at 1:31 PM