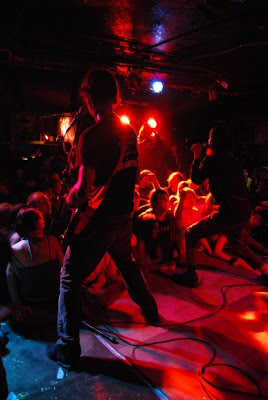 SNFU at the Red Room, January 2008, by Morgan Beare

Marc "Muc" Belke on the 1980s in Edmonton and Calgary: “You’d get your ass kicked for being a punk rocker. There were friends of ours who had Mohawks getting their hair lit on fire on the bus! There was a general hatred towards punk rockers, for sure. It just scared them - they didn’t really understand it...”
The "new version" of SNFU's latest scheduled gig - which, we hope, will actually go off as planned, unlike their last two Vancouver dates - is July 3rd at the Red Room. I'm doing something for The Skinny, including an interview with Muc, and contributions by Chris Walter, Jon Card, and Chi. Belke, of course, has nothing to do with SNFU or Chi these days, and disapproves of Chi continuing to use the name in his absence; the interview will give him some space to air his views.
Posted by Allan MacInnis at 4:00 PM