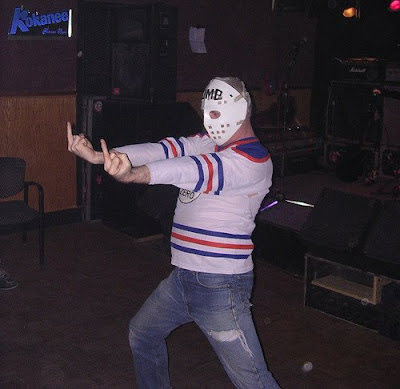 (Hanson Brothers pic provided, I believe, by John Chedsey... by the way, the Hanson Brothers have a new live album coming out this fall and are planning a tour of Europe. What follows, however, has absolutely not the slightest fucking thing to do with them; this was just the only vaguely hockey-themed picture in my files)

Tonight's the night, folks: training camp for the Improv Power Play hockey-themed showdown between Mats Gustafsson and the Swedish Tre Kroner and Team Canada, as led by local clarinetist Francois Houle. A few months ago, Ken Pickering described the project to me thus (when I'd asked him about the Olympics and funding): "There is a commissioning program in place (supported by the Cultural Olympics, Canada Council and other partners) that we have successfully applied to, to develop a project based on the rules, systems and culture of ice hockey (for 14 musicians), two teams of 6 players with each team assigned a neutral country referee with the ability to process the sounds of each team. The concept is to then further develop the two compositions (over five days) in a workshop setting in February 2009 (either before or after Time Flies - dates TBA) in Vancouver with all of the musicians in attendance. The world premiere would take place at the Vancouver International Jazz Festival in June 2009 at the VECC or the Roundhouse. The commissions go to Francois Houle and Mats Gustafsson to develop 60 minute compositions for 6 Canadian musicians and 6 Swedish musicians and 2 neutral referees. Musicians involved will include: Torsten Muller, Peggy Lee, Raymond Strid, Magnus Broo, Kjell Nordeson, Dylan van der Schyff, John Korsrud and MORE!" ("More" seeming to include Per Ake Holmlander on tuba and Jesse Zubot on violin). The event is at the Ironworks - two sets, one starting at 8PM and one at 11. Alas, I don't think the rhythm section of The Thing will be playing tonight; I'm told they're indifferent to hockey (as, truthfully, am I), and besides, they're from Norway...

See y'all at the Ironworks! (And try to track down The Skinny for more of Mats' comments on hockey).
Posted by Allan MacInnis at 1:29 PM