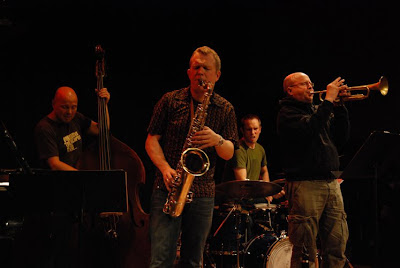 Atomic at the Western Front by Femke van Delft

The jazz festival began for me, yesterday, with my running from work to meet Swedish saxophone player Mats Gustafsson, photographer and artist Femke van Delft, and local bassist/drummer/songwriter/witty guy Dave Chokroun at Mats' hotel. I'd interviewed Mats for The Skinny and concocted a plan to take the man - noted for world class diskaholicism - to various used record stores of Vancouver. This was delightful fun, and will be the basis for an upcoming piece of writing ("Shopping with Mats," perhaps?). Things started out with sad news, however, something I didn't know until Mats told us: one of the festival's planned performances, e.s.t., set to open for the John Scofield Trio, was cancelled because the founder, Swedish pianist Esbjörn Svensson, died last week in a diving accident at age 44. We talked about this and about many other things - from Albert Ayler to straight edge punk to the prevalence of women with tattoos in Vancouver - while doing a loop from Zulu to Neptoon to Dandelion to Audiopile, gathering much choice moss along the way (Dandelion had the stuff Mats got most excited about, garage rock of yore, including a vintage Ugly Ducklings LP - sample them here). After chatting with Jeremy at Audiopile - he gave Mats a free Shearing Pinx single and the men discussed a special Fake Jazz Wednesdays in the offing - we stopped at Memphis Blues for barbeque, Mats telling us over beer and pork how some jazz musicians just have no sense of humour when it comes to The Thing's choice to wear Ruby's BBQ t-shirts when performing. I can't speak for Ruby's, never having been to Austin, but damn, Memphis Blues serves some fine meat.
Anyhow, Mats and I parted from Femke, who had other things to shoot, and transported our meat-and-beer-filled bodies to the Roundhouse to catch Evan Parker (saxes), Francois Houle (clarinet), and pianist Benoit Delbecq. The three men played as tuneful a set as imaginable without playing tunes, creating a gently interlaced tapestry of colours and sounds that was exploratory and free, but welcoming to more trepidatious listeners. Maybe I've misunderstood him in the past - I've never been a devotee of his music, though I've enjoyed performances I've seen - but I don't think I've heard Evan Parker play this way before. Usually I associate him with fairly abstract, somewhat chilly explorations of sound; last night, he offered soft, pulsing, almost mournfully blues-based lines that rather humbly surrendered the lead to the just-slightly-more-extroverted Houle, who also seemed very sensitive (I think of Houle as a bit of a show-stealer, but he wasn't last night). Gustafsson had pointed out in our interview that he was attracted primarily to the energy of punk or free jazz, and said - you can read this in the Skinny, at greater length - "energy doesn’t mean that it has to be loud; like, Derek Bailey playing really really silent can be extremely high energy, you know? For me, good music is always when there is energy inside of something. It doesn’t mean it has to come out, if you put a lid on. But you can’t play at 90%, you know? You have to give everything." The Houle/Parker/Delbecq set put me in mind of this quote. There were noisier passages later in the set, and Delbecq's prepared piano gave an appealing percussive quality to things, but it wasn't a catharsis; it was a focused, controlled performance, that felt like - I scribbled in my notebook - watching "three men having an impassioned but civilized conversation in a language you can't speak, but recognize the cadences of."
Between sets, I got to chat briefly with Masa Anzai in the audience. Masa has set aside his sax, I discover, to play electric bass in the metal band Bison ("I figure I'll always have time to get back to the sax when I'm older and can't play metal anymore," he shrugged, smiling. Funny how people who play such scary music are usually so warm and friendly). The last I saw Masa doing anything metalish, he was doing electronics for the intensely tribal-seemin', intimidating Goatsblood at the climax of a noise night at 1067. Bison, he reports, have just signed with Metal Blade records, something I'd missed. Unfortunately, his duties with Bison will preclude him seeing any of Mats Gustafsson's shows (The Thing, on Monday, is the one not to miss, for me); sounds like Masa's hoping to catch Tim Berne's Bloodcount, though.
Atomic, of course, features Gustafsson's rhythm section, bassist Ingibrigt Haker Flaten and Paal Nilssen-Love, though last night it was in fact Atomic/ School Days that performed - a melding of bands around these two men, who serve in both. School Days, in addition to Haker Flaten and Nilssen Love, features Ken Vandermark (bass clarinet, baritone sax), trombonist Jeb Bishop, and Swedish vibist Kjell Nordeson; Atomic adds Håvard Wiik (piano), Magnus Broo (trumpet) and Fredrik Ljungkvist (sax). (Photos illustrating this article are from Atomic's performance this year at the Western Front; Femke couldn't be there last night, but provided these in lieu). Unforunately - either because of my proximity to Nilssen-Love's kit, or, I suspect, because of a miking problem, I could barely hear Ingibrigt Haker Flaten's bass for the first half of the set, save where he solo'd or did a duo or trio with the other players. I could see him - see his head turning red with the intensity of his performance, could tell that he was putting out some amazing stuff, but it was sadly quite difficult to discern. 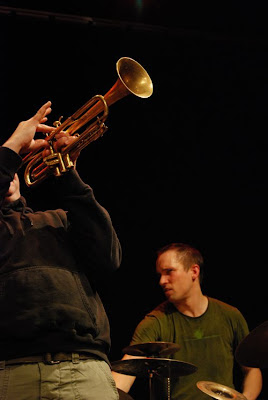 I had no such problems hearing the drums! Nilssen-Love is among the most amazing drummers I've seen; he carries a phenomenal amount of melody into his playing, and lays down lines of percussion so complex and rapid-fire as to guarantee that there will be no spaces in the music not propelled forward by rhythmic gesture; the spaces between each and every note are coloured in. With such dextrous players, the set was a pleasing, easily-ingested mixture of group improvisation, tuneful thematic statements, and rotating permutations of players, working off each other: one man would begin a solo passage, a second would join, then a third, and the three would play off each other for several minutes before the rest of the band kicked in. Then several players would drop off, again allowing space for individuals to stand out, or interact in small-group formation, before returning to some sort of variation on the theme (which seemed to shift with each playing). The most striking passage for me involved a lengthy and highly abstract trombone solo by Jeb Bishop, which was punctuated by rapid, short bursts of sound from the rest of the band; though it didn't seem designed to, it showcased their amazing musicianship, since - despite the lack of visible cues or obvious cadence in his solo, and the absence gestures from a "bandleader" - they timed each explosion perfectly, each player sitting silent as Bishop improvised, then suddenly simultaneously firing a loud BAP! into his line. Then returning to silent waiting. Given a stopwatch, handsignals, a click-track, and ten years to prepare myself, I couldn't have done the same thing. Ending with a tune by Ingibrigt - whom I could finally hear - called, pleasingly, "Irrational Ceremony" - the band started off the fest in fine form, and the packed audience at the Roundhouse Perfromance Centre were very appreciative. I'm looking forward to seeing Ingibrigt Haker Flaten and Paal Nilssen-Love again tonight, with Ab Baars and Ig Henneman. Other highlights are the Improv Power Play sets on Sunday, which will pit Mats Gustafsson against Francois Houle for a hockey-themed competition (this is actually just a warm up to the finished piece - a "training camp," Mats called it); The Thing on Monday; and then the Barry Guy New Orchestra. (Masa Anzai enthused about Barry Guy's powerful bass playing during our chat, come to think of it). There's a lot else to see, but this seems a good start. 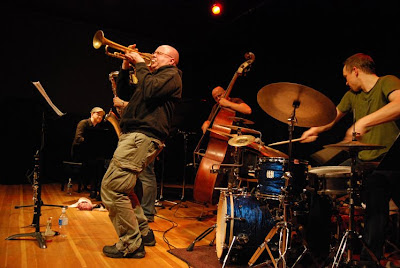 All photos by Femke van Delft
Posted by Allan MacInnis at 11:40 PM