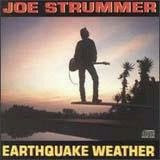 Executive One: Hey, did you hear that Joe Strummer died a few years ago?
Executive Two: Who?
Executive One: You know, the guy from that band the Clash. The 'Rock the Casbah' guy. We cleaned up on that one record.
Executive Two: Ahh, they're yesterday's news. What about him?
Executive One: Well, it turns out that we have the rights to one of his old albums, Earthquake Weather. It was a dog, back in the day. We lost a ton of money on it. But we might be able to recoup some of our losses if -
Executive Two: Don't tell me. Look, there's just not enough profit margin in a reissue. Stop being naive. Probably everyone who wants it has downloaded it.
Executive One: Yeah, yeah - I mean, fuck remastering it or doing anything new with it, but why don't we stick some MP3s online, and while we're at it, we can make a few hundred CDrs up with cheap generic liner notes and laser printed cover art, to sell on Amazon? No one will know the difference until they get it. It's easy profit, right?
Executive Two: People might feel a bit ripped off, paying money for a CDr that they could just as easily have made themselves, though.
Executive One: Ah, fuck'em, they're all a bunch of downloading freeloaders, anyhow. Most of them won't even be able to tell the difference, and the ones who can will only know AFTER we've got their money.
Executive Two: Okay, well - go ahead, as long as we don't spend a lot of money on it. Fast and cheap, that's the way to do it.
Executive One: I'll get on it right away.
Posted by Allan MacInnis at 2:30 PM