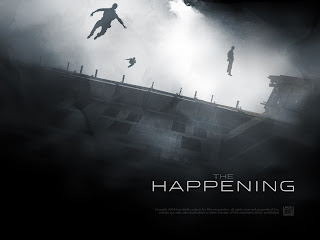 M. Night Shyamalan seems someone whom the critical establishment greatly enjoys assaulting, following some hostile (but still bovine) herd instinct. His newest film, The Happening (official site here), actually is managing to acquire a lower rating than Lady in the Water on Rotten Tomatoes, which is rather surprising, as it's the far more straightforward film, less likely to be punished for its ambitions. Granted, he makes it somewhat easy on his detractors; he's hopelessly earnest, at times embarrassingly unsubtle, and certainly doesn't appear to be able to direct actors very well - the performances in his current film being particulary weak. That aside, there are strikingly original moments in all his films, unsettling visual tableaux that have both an immediate and lasting impact.

In The Happening, these take on a more misanthropic cast than in any of his previous films - for instance, when a carload of protagonists turn down a suburban street to discover that a crew of landscapers have hanged themselves from the trees, or when - in the film's most striking moment - a suicidal man sets a large power mower running and then lies down in front of it, waiting passively as we watch from a distance for the blood to spray, which it does. The film - most people know this, I think - deals with an event that threatens to decimate humanity, with people killing themselves left-and-right, for reasons that we at first do not understand, but which will ultimately be connected to the environment. One particularly bloody image - the lawnmower guy, I believe - is followed by a shot of a real estate sign with the words "You Deserve It" writ large, suggesting that in his own New Agey environmentalist way, Shyamalan has quite the hate-on for certain segments of the population (in his previous film, his loathing seemed mostly restricted to movie critics). It's interesting to see him indulge his dark side; this is easily his darkest film since The Sixth Sense, though its nowhere as effective.

The Happening is not a great film, by far - it offers a simple in-group/ out-group moralizing message, that either you get on the side of the good guys or suffer a horrible fate - but it touches on very real paranoias, from the disintegration of the family (yep) to worries about bee disappearnces and a general sense that we have done great damage to the environment and must soon pay the cost. It's relevant, fairly creative, and sincere, and manages to have some genuinely unsettling, even upsetting, moments. I can't help but think - in an year where a morally bankrupt, smarmily cute, pandering FX-fest like Iron Man is a box office leader - that Shyamalan is being hated for exactly the things I like about him.
Posted by Allan MacInnis at 10:34 PM

Hi Al
I agree critics are jumping on him, and for the wrong reasons (because the movie dares to be slow and composed, instead of slick and empty). The movie has problems, but at least it's a film from a distinctive sensibility, not from the machine. If you're interested you can read my review here
http://www.lovefilm.com/features/detail.html?section_name=editorial&editorial_id=6921
(or google tom charity the happening).