After falling in love with none of the opening bands (Abigail Williams, Hate, and Keep of Kalessin), I was half-worried that I'd be bored by Mayhem the other night, believe it or not. Extreme metal on my headphones to drown out the banal jabbering of my fellow commuters is one thing; shirtless thugs somberly pumping the goats into the air like it means anything and recycling Sabbathy blues licks is another (okay, so Keep of Kalessin were actually quite a bit better than that, and neither Abigail Williams nor Hate were without their moments, but still, it didn't really engage me). Up til Mayhem took the stage I was wondering if maybe the only metal shows I should go to are local ones - if there's something so tribal about metal that it almost requires a community connection to be meaningful; I'd rather support a local band at Funky's with no pretentions than a visiting band filled with them, and my somewhat stoned notes for the evening kept returning to the theme of how much more I'd rather be watching Bison, who at least look like they're having FUN when they play.*

Then Mayhem took the stage, and from the outset, my opinion changed. Overwhelming stage presence, the heavily made-up singer shrieking into an inverted-cross mike and the shirtless bassist - "the one who was so unpleasant to poor Sam Dunn in that doc" - seeming charismatic as all hell, sinewy and smiling with an evil grimace as he channelled and surfed the band's energy, completely absorbed in the music... which was absolutely relentless, and lit with bright blue and abundant strobes and fog. A crazy, chaotic, and very, very powerful band. They actually namechecked Skinny Puppy, too! (I expected them to maybe drop a reference to Blasphemy, but the praise for Skinny Puppy made perfect sense). The people who came late had the right idea - and I was very happy to see that indeed, by the time Mayhem took the stage, the place was packed.

True: I did leave early, and may have missed some theatrics - but I'm a suburban wuss, and I'd barely slept the night before, so getting home before 1am seemed vastly preferable than waiting til the gig was over and arriving after 2... My three best photos of Mayhem onstage in Vancouver follow: 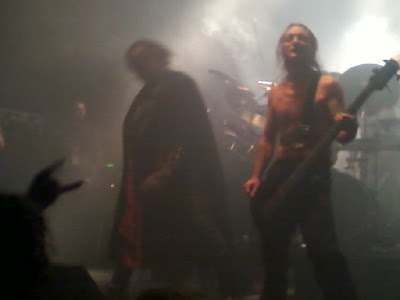 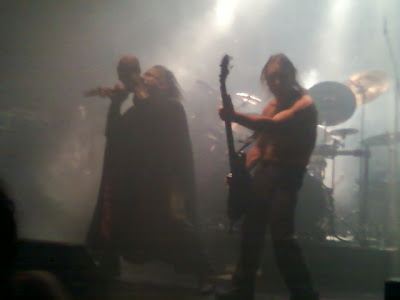 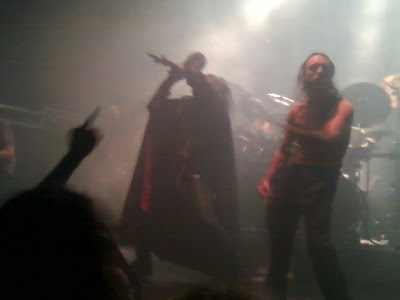