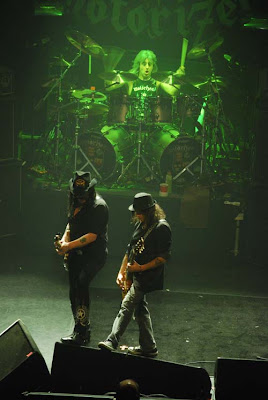 So any really diehard Motörhead fans might want to check out Friday's Motörhead tribute band, Snaggletooth, at Funky's - they do a pretty credible job of what I think is "Orgasmatron," mislabeled as "Killed By Death" here (that surely is Sonny of Little Guitar Army, eh?). It's kinda unsettling the extent to which the lead singer has gone to look like Lemmy, though I don't believe he has taken it to the full limit, which would involve growing a large, hard mole on his cheek. (That would be impressive). If I didn't live in the suburbs, I'd be there for sure. Actually, I still might be, we'll have to see: I can get drunk and try to impress any chubby pale punkettes in the audience with my tales of meeting Lemmy ("I gave Lemmy Kilmister tentacle porn!").

...Then Monday, it's the Lemmy movie, for Music Mondays at the Vancity Theatre. This is a very funny, very engaging documentary, with various people praising Lemmy or offering colourful anecdotes. Highly recommended, surprisingly endearing and revealing.

...and finally, if anyone has missed it, Motörhead will be KINDA sorta coming back through town on Megadeth's Gigantour, which will see the band playing the Abbotsförd Entertainment and Spörts Centre on February 20th. If anyone wants to drive me to Abbotsförd...
Posted by Allan MacInnis at 6:19 PM