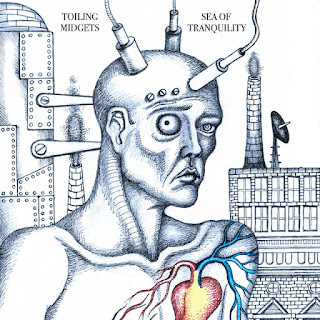 Apparently there is at least one error in my Toiling Midgets article. Somewhere in my checking in with Heather Haley, someone (coulda been me!) got confused about whether it was Toiling Midgets or Negative Trend she remembered, and I ended up writing that it was Toiling Midgets. It now comes clear that it was Negative Trend. I am not gonna hassle the Straight editors about the goof-up, tho'. I mean, because of it, Heather's in there, and there's a link below on the Straight page to my Heather Haley interview, and I would have still included her based on her remembering Negative Trend, so... whatever, I guess! The world will not be much impoverished for the error.

There is also one quote that I meant to use, that didn't get used, from my interviewing Craig Grey. I was wondering why the band's first LP (Sea of Unrest) and their current one (Sea of Tranquility) seem to have a "moon" thing going on. I mean, that I know of, there's no Sea of Unrest on the moon, but there's definitely a Sea of Tranquility - not actually involving water, you understand; apparently this name comes from an old mistake, based on the area appearing dark to the eye, like a sea might. But calling the new album the opposite of the Sea of Unrest also seems to reach back in time and put moonishness in the first album's name, too. So what's going on, there? 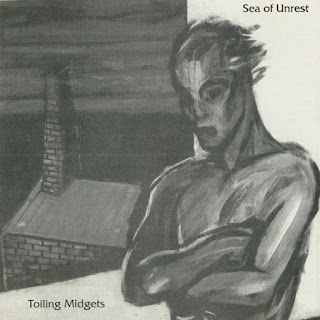 Now, Grey doesn't seem to be trying to be punnish here, but apparently the title Sea of Unrest "came from our drummer, Tim Mooney" - get it? It's moony! - "who was most excellent at titling things and it was more about our restlessness than the moon. The new LP is Sea of Tranquility, which is basically putting our long San Francisco chapter to bed," as the band transitions to being an international band. It's more about closure than dark spots on the moon, the likely unintentional pun aside.

Other than that, about the only other thing I could have done to make the article better would have been to link to Grey's Negative Trend or Toiling Midgets websites, which I don't think I ever did, but surely people who are interested can find these things. They appear to be jam-packed.

All that aside, Grey seems to be very happy with the piece, and I've enjoyed checking out a new band. I've had a crap night sleep, but I might try to go to this show, tonight, if I'm still functional. It's at CBDBs, which I gather is not the best venue in the world for creature comforts. I haven't been yet, though, so I will boldly venture forth. May I direct you to the Facebook page for the event, for more?

b) my CPAP mask, which is ridiculously over-designed, falls into three pieces in my sleep and I have to sort it out. This wakes me up at 2:30 am this morning, after which I am awake all night writing questions for an interview I'm working on, because my brain is awake whether I want it to be or not. Luckily my clackin' keys doesn't intrude on my wife's sleep, cos she has to work in the mornings (I had today off).

c) I get some very bad, broken sleep between about 9 and noon, then have to go out. I am still planning, at that point, to go to the gig, but with only three hours sleep, I opt for Real Coffee (I usually do decaf).

On the plus side, I find Kurosawa's Red Beard on Criterion for 25 cents in a library booksale.

d) The coffee, though, it turns out, makes me quite ill, especially as I commute away from the library for a day of thrifting. Lack of sleep and poor dietary choices sometimes lead to fairly severe, get-off-the-bus-to-barf motion sickness. I stop short of barfing today, but I'm getting those acidic belches one gets on the edge of barfing, you know? Ugh.

e) The plan about whether to go to the island to be with said relatives tomorrow seems to start to crystallize into the "affirmative" end of things (it has since gotten nebulous again but it was less so when I decided...

From having known nothing about Toiling Midgets to doing the interview to the day of the show, I have become quite a fan, but sorry, folks, I am not so much a fan of anything that I am going to try to stay awake past midnight when a) I've had three hours sleep, b) I feel like I need to barf, c) I have to commute back to Burnaby and not get home til after one so that I can d) then get up at 7am, in the event that we are going to the island.

At the point that I call it, fortunately, I am near enough the venue (and have met up with my wife) so that we can do a hit-and-run on CBDB's, as Craig and Paul are wheeling in an amp. I introduce myself (and get exposed to an odd moment as some guy who follows my stuff congratulates me on doing my "due diligence" as a writer, which is flattering indeed, if unexpected! I don't get it often - I mostly just feel like I am pumping words into the void, y'know? It's nice, if a bit weird for me). Anyhoo, I buy some vinyl, ask'em to sign it, and make plans to follow up the interview for another publication. I am sad I am not at the show (and have to spend some time apologizing by text to people who are expecting to see me), but in my current state, I need to be home and resting.

But the first thing I do when I get in is put on side one of Sea of Unrest. It's awesome. Hope the gig is fantastic. (I suspect the room may be kinda full...).