An odd night at Lanalou's Well, that sure was different.

So I'm not sure who Merlin Cosmos is (apparently he's also performed under the name Michael Ross, and has a resume that includes appearances on Sesame Street and Mr. Dressup, though I'm not finding examples I can link to online). He's obviously a seasoned entertainer, doing card tricks and sleight of hand gags - some of which were truly impressive, but in a very old-fashioned, old-school, "vintage magic" way, using gimmicks the mechanics of which are not entirely mysterious, but nonetheless require craft. For example, you know when he does the thing about ripping up the newspaper, at some point, he's subbing out the torn shreds of the paper for a duplicate, whole paper that he has tucked away somewhere - except you still can't see the moment when he makes the switch, so it still works; knowing roughly how the trick must be done doesn't detract from the fact that he can do it, and you can't. At times, his stage patter had a bit of an edge to it - I was reminded a bit of Doug Bennett's somewhat angry self-deprecations between songs during latter-day Doug and the Slugs concerts, where Doug would occasionally throw in a snarky comment about his divorce or such - and there was one routine the gag of which appeared to be his ability to repeat it over and over again, with slight variants, for an extended period, which kind of fucked with the mind a bit (it also involved a box with the words "magic show" written in pen on it, which he showed us a half-dozen times, except the spelling of the words somehow changed each time; not the sort of act you'd want to see on acid, I think)... but I was amused enough and willing to play along, not being on acid, and never having actually seen this sort of old-school magic done live before... 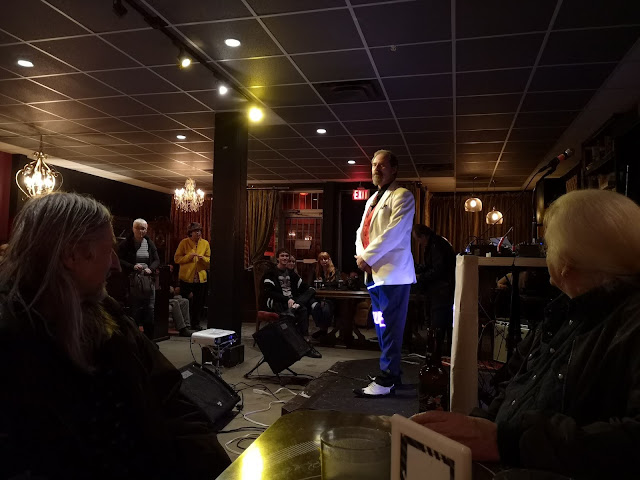 ...except that the whole act was briefly threatened and made even weirder by Cosmos being heckled by Nardwuar, who leapt to the defense both of Goober Pyle, and of the audience, whose lack of familiarity with Goober was apparently a necessary ingredient in the routine Cosmos was then performing (which involved a recording of this song). It seemed like Mr. Cosmos, however versed he might be in the world of Goober, was not in fact familiar - unlike everyone else in the room - with Nardwuar (!), and genuinely incensed by his interventions, which involved Nardwuar taking a brief poll of the audience - something like, "don't say we don't know and love Goober! Who loves Goober?" - prompting a cheer that led to Cosmos abandoning the Goober routine outright, after having told Nardwuar, in effect, to shut up, which Nardwuar then actually did.

On some level, this was value-added entertainment, but it was strange to witness; I've seen Youtube clips of people getting non serviam with Nardwuar, but never seen it in person (I half expected it to change into a gag, like it was all a pre-planned conspiracy, but I don't think it was; if Nardwuar and Merlin made peace during the encore, I missed it...).

There were a few other weirdnesses in the night. These included The Most Expensive Milkshake I've Ever Tried: you know the bit in Pulp Fiction where Uma Thurman orders a five dollar milkshake, and John Travolta comments about how, for five dollars, it better be a hell of a milkshake? That was, of course, back in the 1990's, before most milkshakes cost that much; but last night, the milkshake cost twice that - $11 with the tip - and was not in any way a hell of a milkshake: it was basically a small jar of chilled milk, chocolate syrup, a small splooge of whipped cream, and I'll have to take Mark's word for it that Betty actually did put ice cream in it; it certainly wasn't noticeable from the taste or texture. No alcohol in it, either, which might have justified the price. My wife, whom I'd been talking up the food at Lanalou's to, was somewhat scandalized (the salads were also simpler and smaller than I recalled, though the fries were still pretty great).

There was also the oddness of a second opening act, Phuture Memoriez, who were musically engaging - electronica and manipulated images - but whose frontman carried in his beard and demeanor an unshakeable resemblance to a Zach Galifianakis character - pointed out by my wife, and thereafter something one could not un-see (before that I'd been thinking of David Thomas of Pere Ubu, but with a bushy beard). I knew the guy from a previous job, in fact, which was a surprise to discover and a challenge to my memory (his previous band, Go Ghetto Tiger, was briefly on my radar, but never something I wrote about). My wife also had her own odd memory challenge, being recognized by someone with whom she went to high school on Vancouver Island, many years ago, and hadn't seen since; she was more surprised that he recognized her, since when she knew him, he had leopard-print hair (and she didn't).

Finally, there were tickets that urged arriving at 7:15 (which I took at face value, though Lanalou's was dark when we arrived, and performances did not in fact get underway until around 9:30). Not even water was put out, which led to my trying to fill a glass with water from the bathroom sink, since I have a sore throat - only to discover that the water was disturbingly cloudy. (It apparently settles down after awhile, but what's with that?).

Of course, having arrived unreasonably early, we did get a great table, which we ended up sharing with Don Xaliman and George McDonald of the Melodic Energy Commission, so that's good; Don even had, to my surprise, a copy of the new Melodic Energy Commission CD for me (I contributed to the liner notes). We learned in chatting with them that Randy Raine Reusch and Mei Han's daughter (Zizi, I believe) is apparently a pop sensation in China these days (?!) and swapped stories of odd encounters with animals (like the mouse who ran down the road towards me and up onto my foot when I was walking around trippin' in Maple Ridge one night, years ago; or the time Don was lying on his back watching a meteor shower and was joined by a skunk, who peacefully hung out beside him for awhile then moseyed on). At the end of the evening, I reassured George that he, and not Hamm, is still my Theremin Man, but even George had surprises: apparently he's down a different rabbithole altogether, these days, experimenting with analogue synthesizers ("I haven't touched a Theremin in a year"). 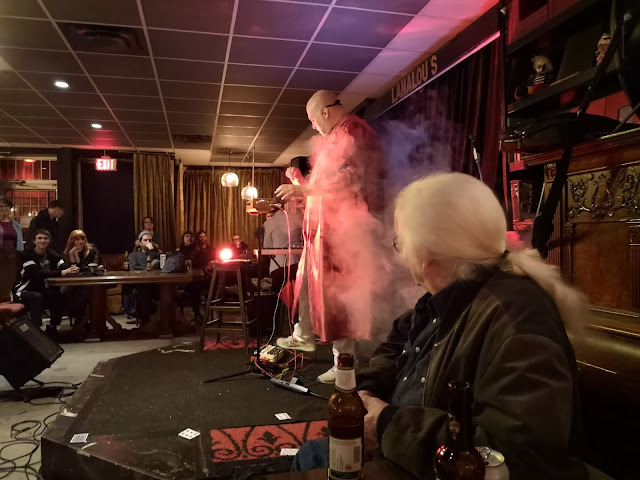 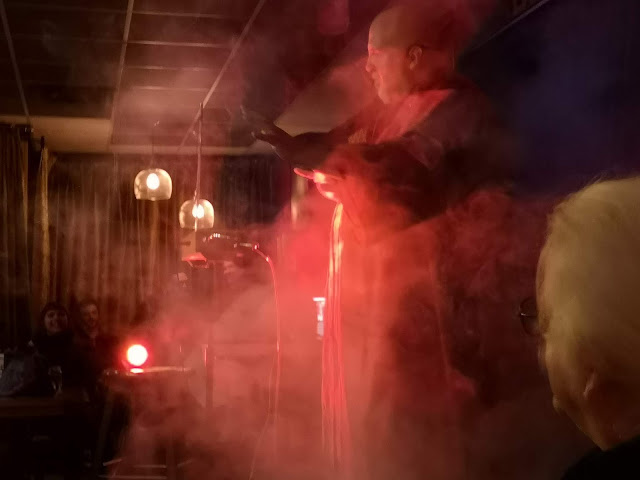 Anyhow, none of the above was exactly bad (except the price of the milkshake!), and all of it made for a different sort of night out, but it was all also somewhat unreal... which in a way is perfect as a warm up for Stephen Hamm, who did pretty much what I imagined him doing in my mind's eye, self-accompanying himself on Theremin with a variety of programmed tracks which he manipulated with his feet, singing to us in his robes about rocketships, UFO's, and the "space sister," Ruth Norman, whom he declined to mention by name. (He also did "Volcano" but if he included his dog barking in the live version, I missed it). His persona was effusive and sincere and charming, his voice powerful, and the music very close to what you hear on the CD. He namechecked Delia Derbyshire at one point, before covering "Love Without Sound" (I believe the original is here), and, for the last song of the main set, did "2000 Light Years from Home," which was pretty delightful to hear, especially since my wife's Christmas gift to me a couple years ago was that fancy reissue of Their Satanic Majesties' Request...

However, I have nothing much to say about Hamm's performance - it was very entertaining, as was, after decades of being in the same room with him for one thing or another, finally MEETING Hamm, who seems even more formidable in height when you're shaking his hand. At 5'11" and 350 pounds, I'm not used to feeling dwarfed by other people, but I did beside Hamm. He signed a few records for me with a printed HAMM!, all in caps (I considered pestering Slow's Christian Thorvaldson, also in the room, to sign my "I Broke the Circle" single, but what the heck, he wasn't working, and my wife and I have both been feeling poorly, so I let it slide; so far I've just got Terry and Hamm). Anyhow, I've already done a big blogpiece on Hamm (see below), which will say more about the night than anything I might add now.

One interesting thing did happen with my fellow audience members. A bearded, jockish, expensively-dressed guy was holding forth at the bar at great volume while Hamm was performing, and I looked over to gesture for him to tone it down - half fearing he'd go alpha on me, but it was truly obnoxious, how he was carrying on. Surprisingly, he totally silenced himself, after which the fact that no one else in the room was talking became highly apparent. Pretty unusual for a Vancouver night out, actually - usually the room is filled with people like him - though I think that the dude might have become self-conscious when he realized he had been the sole talker, because he ducked out about two minutes after he clammed up. I actually felt a bit guilty for that! 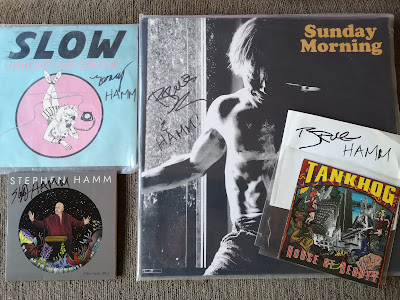 I confess to having ducked out, myself (with Erika) before Merlin got on stage with Hamm for the last portion of the evening, which I'm sure was weird and interesting. I suspect that as nights out go, for both my wife and myself, the oddnesses of the evening will keep this one in our memories longer than most shows we go to. Even my dreams, afterwards (which involved kung fu fighting, never before an element of my dreams) were weirder than usual.

Posted by Allan MacInnis at 9:45 AM