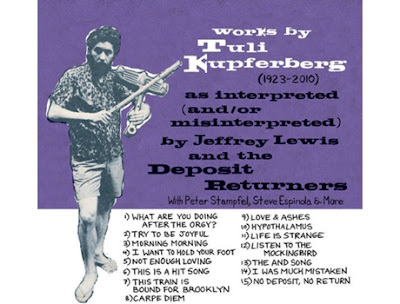 I missed it when I interviewed Jeffrey Lewis the other week - that he's done an album of Tuli Kupferberg covers. He might have said, when I interviewed him in 2016, that he was working on one, but I forgot to ask, and didn't even realize until he mentioned it from the stage the other night that he had it on his merch table.

I bought it (with thanks to Pete Campbell for loaning me five bucks after I shot my wad on other merch). It's delightful, but the best part of it is, Peter Stampfel is on it. Yep: the guy who sang the most distinctive backup vocals for some of the original Fugs recordings, sings backup vocals here. Compare: Jeffrey Lewis and the Deposit Returners' version of "Carpe Diem," here; versus the Fugs' original, here.

Plus "Hypothalamus" is on it!

I really, really like Jeffrey's new album, Bad Wiring; no doubt he feels prouder of it than he does an album of covers, and would probably be happier to know that I like his originals more, but I bloody love this Tuli project. If you were at the show and enjoyed it - of if you've ever been a fan of early Fugs - you really, really should check this out.  It's magnificently good fun.
Posted by Allan MacInnis at 12:20 AM