Here's how stupid my current cold has me: I have to leave my job near Stadium Station this morning for a meeting near Clark Drive, at our other location. I am then to return to Stadium to finish my shift. I get to the meeting okay, and though I am fatigued - after two back to back colds with very different symptoms, the second of which just announced itself the other day - I stay more or less alert and functional throughout.

The meeting ends, and I commence the trek back. Both coming and going requires a bit of a dosey-do at Commercial, to transfer from the Expo Line to the train bound for VCC Clark. On the way, I think: hmm, I don't have the right kind of mustard seeds (yellow, not black) for a dish I am making, and I appear to be out of whole cumin seeds, a true staple of the Indian spice world. Surely Safeway will have at least whole cumin seeds? I have time to make a quick stop, so I get off at Commercial Drive.
Feeling head-befogged and weary, I trundle into Safeway and establish that they have neither whole cumin seeds (!) nor any sort of mustard seeds at all. Maybe Donald's does?

So - feeling increasingly tired, but wanting to be able to cook with the right ingredients, I put the other items I was considering buying at Safeway back on the shelf and head to Donald's Market up the Drive, only to establish that they too have neither whole cumin seeds (they have a space for them, but nothing in it) nor any kind of mustard seed at all. Fuck! I thought for sure Donald's would have my back.

Ah well, it's getting to when I'm due back at work, so I better get on the train. I slouch wearily to the Skytrain, conserving brainpower as much as possible - it's the kind of cold where just thinking is exhausting - and don't realize until I am off the train and have walked three quarters of the way to my destination that in fact, I've gone back to Clark Drive. I ran on autopilot the whole way to the wrong location - the one I had most recently left from, but not the one I was due at. Double fuck!

So I have to get back on the train from Clark, for the second time today, and head back to Commercial, there to get on the Expo Line and make it back to Stadium, arriving with five minutes to spare and (small mercies) a cup of coffee I snag on the way.

Given the above, it is highly unlikely, in my current state, that I will go see Coach StrobCam this Friday at the Princeton, despite a stellar bill also featuring David M. and Stab'Em in the Abdomen. I have, however, done a feature interview with Pete Campbell about their most enjoyable CDEP, and wish them godspeed - whatever exactly godspeed is - at the show tomorrow. I will be at home, popping Tylenol and moaning. Or such. I mean, even making dinner, right now - despite my not having a full meal since about noon, and having worn myself out with fruitless walking - seems far too much effort (Walmart Metrotown did have whole cumin seeds, note, but I'm sensing that mustard seeds just aren't that popular an item).

Anyhow, for those who go, have fun "at the foot of Victoria" tomorrow. (I'm not sure what images that brings to mind for you, but for me, a pub is not among them). 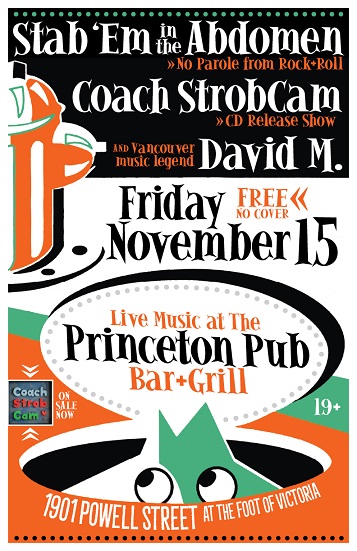 Posted by Allan MacInnis at 8:15 PM