George RR Martin, The Armageddon Rag, and Game of Thrones 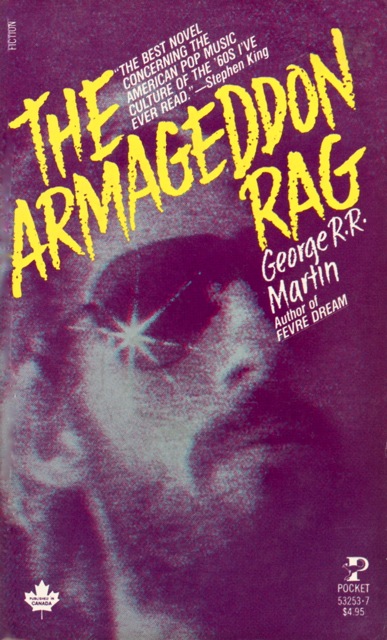 I came late, this month, to Season 1 of  Game of Thrones - a phenomenon about which I have felt some curiosity, but also some desire to protect my time from. It seemed to require a considerable investment of same - like it would be a lot of work; like the author, George RR Martin, expected a fair bit of his readers.

I am speaking, above, of course, of the HBO series, but I also did attempt - long before sitting down to watch an episode - to read book one of A Song of Fire and Ice. I got a few chapters in, but the demands placed on a reader seemed perhaps... in excess of what I would get from the novel. Were I to wish to put a great deal of effort into reading, maybe I'd tackle Moby Dick or Kesey's Sometimes a Great Notion again, or do the major novels of Ursula K. LeGuin (I've only read The Lathe of Heaven, and loved it, but I gather it is atypical). It's not just that I'm too lazy to enter into  a relationship with a writer that requires a degree of work - I am a big fan of Blood Meridian, for instance, and have read all the novels of Cormac McCarthy minus The Orchard Keeper; it's that one of the things I value about pulp is its efficiency. If I'm going to read crap, I like it to be concise. From hardboiled crime to classic SF, there are very few pulpy entertainments that I've read that have exceeded 350 pages, and the series I've delved into - Bosch, Reacher, Ellroy's Los Angeles novels, or what-have-you - can be read in any order, without having to construct charts or diagrams, explaining who each family is, what land they are from, and what long-standing ambitions and resentments fester in their hearts. Other than the first novel in the Dune series, I have read very little in the way of epic, world-building fantasy, and have largely been content to keep it that way. Robert Jordan, for instance, I am not remotely curious about. And Tolkien? I read The Hobbit.

Perhaps George RR Martin is not crap, though? There does seem to be some heft to this series - it's not just escapism. There seems to be some ideas beneath it, something it has to say about power and human nature and honour and so forth - the big themes of the first season. And some of the characters - Tyrion Lannister, obviously, as played in the series by Peter Dinklage - are truly memorable and interesting creations, almost Shakespearean. Not sure what to make of it, as literature, really - not having actually read the books - but I must say, after dragging my feet through episodes 1 to 6, forgetting characters, having to play things back to keep abreast of plot points, and constantly finding myself asking myself "Is this really going to be worth the time I'm having to invest?", I found myself utterly gripped and engaged by the last three episodes in Season One. Which Erika and I watched back-to-back, tonight. It was very compelling.

And thus, I am curious about Season Two, and Three, and... At the very least, I think I'm committed until I find out what a Red Wedding is. I have deliberately kept myself ignorant on these matters; for instance, I had no idea before sitting down to Season One that Sean Bean would... well, let's leave the spoiler out, I guess, for the sake of other GoT virgins.

I'm not sitting down to write about Game of Thrones, anyhow.

I'm sitting down to write about The Armageddon Rag, George RR Martin's fourth full novel, originally published in 1983, and purchased off a Coles Remainder table by me in hardcover around 1984. Read it and loved it then, and about five years ago, I read it and loved it again. May I just say, if it is not already being filmed somewhere, this novel has amazing potential for a megabudget hit, if handled right. Movies about rock bands can be lucrative, and seem to be in vogue of late. Apocalyptic fantasies are popular, too. Most importantly, though, someone has to make this movie while the Blue Oyster Cult and Alice Cooper and Wayne Kramer and Iggy Pop and and Robert Plant and so forth are still active. We've kind of lost out on Black Sabbath, already. I'm not saying that any of these people need to be involved in the movie (it would be cool but unnecessary), but they should be alive to dig any references to themselves, so fans can enjoy imagining them enjoying it, and if we wait too late - wait til kids in their 20's are going "Who is Jimmy Page?" - some of the potential for a hit gets lost.

Mind you, it's been  awhile since I read this book, so I can't give you the most detailed accounting of its story, but anyone with an interest in rock music (especially the rock music of the late 1960's) should check it out. Steve Newton, especially, should read it. Bev Davies should read it. Any of my fellow writers and editors at the Straight should read it.  It's basically about the failed revolutionary potential of rock music, about the promises made in the 1960's (to "kick out the jams, motherfuckers!") versus what actually was delivered. It's the 1960's viewed from the hindsight of the 1980's, through the eyes of a disappointed Big Chill boomer who was there. It also has occult and quasi-Lovecraftian elements, as I recall - about murders being committed in the wake of a reunited rock band - sort of equal parts Blue Oyster Cult and MC5 - whose reunion is actually designed to bring about something supernatural: a veritable rock and roll apocalypse...

Anyhow, I've said enough - and I don't remember much more to tell - but it's a fun read. It's also, unlike A Song of Fire and Ice, something you could, if highly motivated, read in a day or two. (Or a week or two, if you're busy and tired all the time!).

Maybe I should take another stab at the first book in A Song of Fire and Ice, now that the series has provided me some cheats....
Posted by Allan MacInnis at 12:31 PM