The whole situation with David M. is unlike anything I have ever experienced with any other musician. He has a small cadre of believers, collaborators, and friends who show up at pretty much every show (or feel guilty and make personal excuses). He has been coaxed (in part by me) into doing larger performances in the last while - like opening for Marshall Crenshaw at the Rickshaw, or playing DOA's Fight Back Festival - but he's said, over and over again, that he prefers the smaller shows; he really prefers intimacy over playing to a roomful of strangers. For instance, at a recent celebration of the music of Paul Leahy, out at the Heritage Grill in New Westminster, apparently exactly one person showed up who was not actually in the band or attached to the venue - but that person was Finn Leahy, Paul's son. M. was delighted with that turnout and I think Finn ended up some kind of participant, as well (M. will often bring members of his audience onto the stage, even if only to hold his Gorgo). 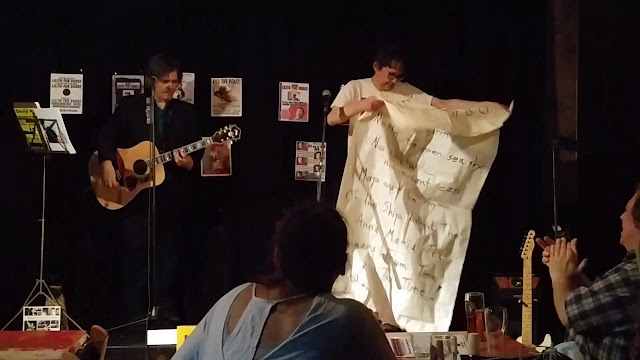 In addition to being a quality-over-quantity kind of guy, he's remarkably loyal; to use a personal example, he played my wedding, performing a song we co-authored - having had worked graveyards the night before. He spent the day commuting to Duncan, where the wedding took place, and then commuted back to the mainland to work another shift, sleeping if at all while in transit. Would I do that for me, if I were him? I dunno.

One of the most loyal of M's friends, it seems - far more than me - was the late Lester Interest (AKA Glen Livingstone), who has been at almost every David M. (or NO FUN) show I have been to, and hundreds that I have not. More than just a Gorgo-holder, Lester read weird-ass, hilarious beat poetry set to M's music, for instance doing an adaptation of Eric Burdon's "The Black Plague," skewed to take in Christmas (so instead of "bring out your dead," it's "bring out your gifts"). He was dry, witty, enigmatic, and a wholly anomalous presence on stage. I suspect he was a pretty talented writer, actually, tho' I haven't read anything he might have done.

But sadly, Lester Interest has passed on. This is the last photo of him I took, last Christmas season, where he arrived late-ish at the Heritage to sit and watch David close the show (perhaps during his varied, 40-minute riff on "Good King Wenceslas?" (also featured in the photo are Bob Hanham, Norah Holtby, and Richard Chapman - like i say, quality over quantity, all the way). 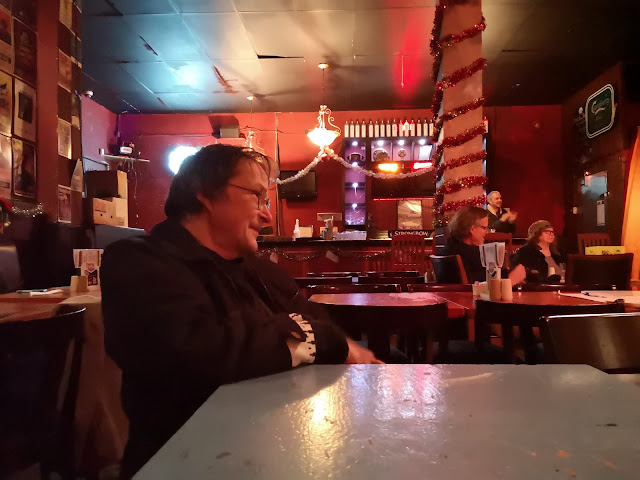 I didn't really know Lester well. We interacted a bit about Doors bootlegs (he knew his Doors, and had, I believe, seen them live more than once). Mostly I knew him from his very quirky contributions to M's shows, but I'm sad I didn't get to know him better, and I have plans to make at least one of David's shows (he hates the word "tribute") offered in Lester's memory. I do not know what David has planned for his friend (he has a whole song cycle, Leahy Stardust, written with Paul in mind), but like the poster says, it won't be M. that I'm going to the show for. See you around, Lester (tho' the way things are I'm hoping it will be later rather than sooner). M's shows will be at least 16% less fun without you. 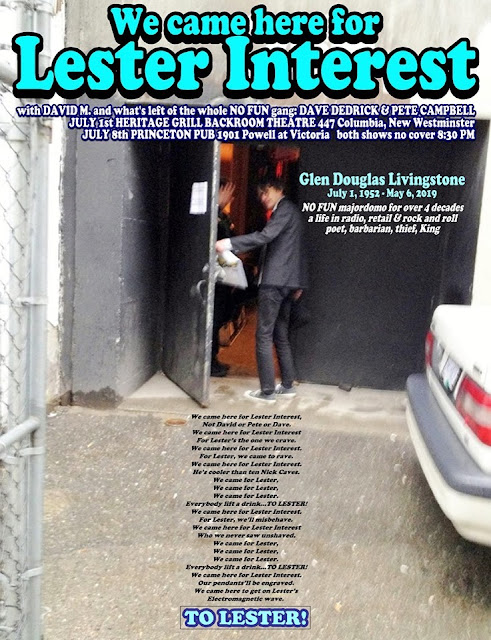