The New Questioning Coyote Brigade (with Gerry Hannah) and the Pointed Sticks, tonight at the SBC 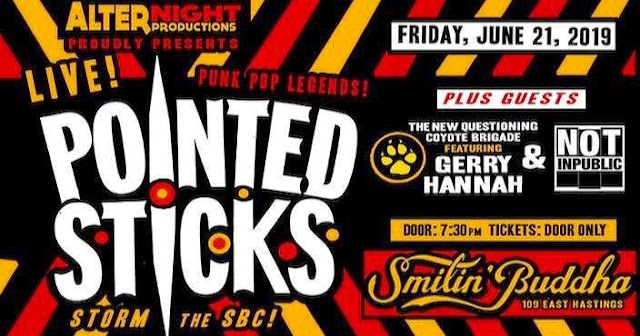 Do you miss the Subhumans? (Our Subhumans, not the UK band). Have you  heard Gerry Hannah's roots-rocking re-arrangements of songs like "World at War" and "I Got Religion?" You should, really really. Tonight you get a chance to, at the SBC Cabaret, where the New Questioning Coyote Brigade, Gerry's "new" band (actually active for a few years now, but not yet widely appreciated, I don't think) will open for the Pointed Sticks.

I interviewed both Nick Jones and Gerry Hannah about the gig, here. Truth be known, I have been thinking for awhile now that I have been running out of things to ask the Pointed Sticks, who are rapidly turning into my second-most interviewed local band (after David M of NO FUN, but ahead of DOA, for instance). It turns out I was wrong: I had never asked Nick Jones, for example, where he was when the Direct Action ("the Squamish Five") was active, and if his story intersects with theirs. Turns out it does, a little! So that's a pretty interesting read.

(Sorry to Not Inpublic, for not having mentioned them in that article - I didn't notice them on the poster!).

Also, if you haven't read it, I have an update on the Rickshaw, talking with Mo Tarmohamed about his last couple of years running the venue. Mostly I've been preoccupied transcribing David Yow stuff (see below for some), and soon will need to put aside this little hobby of mine and focus on something more lucrative. Meantime, I have a gig to go to tonight!
Posted by Allan MacInnis at 12:00 PM