Invasives at Lanalou's: a mini interview place marker until Byron gets back to me

Now that Nomeansno is over and done, will the Invasives feel the pressure to fill their shoes? They prolly can't - those are some big, heavy shoes - but as I've said before, I like the Invasives a whole lot more in their new incarnation than their previous, Married to Music, and there are a few of their songs that I think are truly, absolutely, superlatively great ("Living Your Life Like It's Somebody Else's," for instance, which I think I like more than any single song on All Roads Lead to Ausfahrt - though it strangely reminds me of "Heaven Is the Dust Beneath My Shoes").

Anyhow, I've sent off some interview questions to Byron Slack. Until such a time as he gets back to me, you may contemplate their gig poster and know that the Invasives play Lanalou's on October 12th (the kickoff of a small tour of the province, also outlined on the poster). If they're lucky (and if Byron gets back to me in time), I will have a blogpiece up about them before then...

I receive no consideration for this shit, folks, I just do it because I like the music. Hell, I won't even try to cadge a guestlisting, it's fucking Lanalou's, what's it gonna cost, $10? Prolly not even. 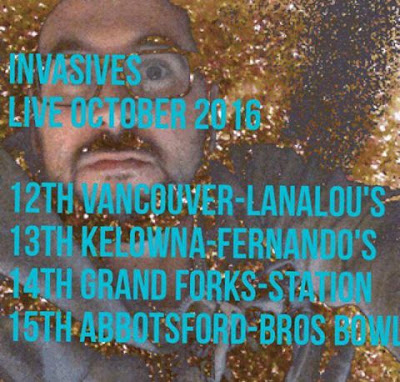 Posted by Allan MacInnis at 7:48 PM

"Fucking Lanalou's" is incorrect. It's "Lanafuckyou's". Thank you for your attention.