I gave a bunch of people an Oscar Brand mixed CD at the WISE Hall last night, where Gerry Hannah, unseen by many, did the Subhumans "In Good Company" and the wicked, original, almost rockabilly arrangement of "World at War," and got a bit of a surprise back-up vocal visit from Jon Card on "I Got Religion" (besides playing many great songs off Coming Home, his under-heard solo CD). I kinda worry about Jon lately, actually - he's had two of his best friends and bandmates in the music scene die in the last couple of years - but I didn't really get to chat with him (did say hi to Petunia, who looked surprisingly like a regular guy, dancin' with his girl, sans bolero hat and string tie...). Joey Only gave a full-energy set, every bit as enthusiastic as his Rickshaw show a few months ago, despite there being a third of the audience (something else must have been going on last night). I did a big Joey Only interview for BC Musician to plug the gig, here, talking about Todd Serious, Tempest Grace Gale, Brian Goble and others... Jeff Andrew was in the audience, Clayton "Eargoggles" Holmes was at the bar, and the girl from Chaos Disorder and Panic was on door most of the night... Calgary roots band Rotary Park gave a terrific opening set including a hayseed reworking of Pink Floyd's "Time" (!). It was a good show!

Anyhow, for those who received my Oscar Brand mix CD, here are the songs on it! (I'm also mailing one to sometimes Holy Modal Rounders songwriter Antonia Stampfel, author of "Bird Song," who could use some Halloween cheer... she's in an assisted living situation, and Peter announced on Facebook that she likes Halloween cards and posted the address, so...). My card for her plays "Tequila" when you open it, and has a message about "Hallowe'en spirits." 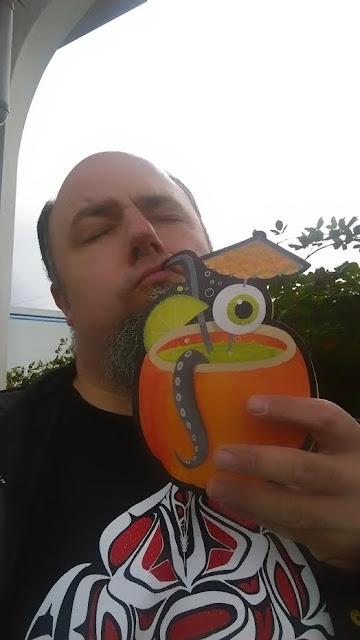 Oscar Brand playlist (Antonia's version is slightly different near the end), Titles vary with this folky stuff, so some songs ("Good Ship Venus") are alternate versions of others ("Frigging in the Rigging," but also bits of it appear in "The North Atlantic Squadron," not included and as far as I know not done by Brand). All of these are GREAT! RIP, once again, Mr. Brand.

Happy Thansgiving and happy Hallowe'en, folks... More to come, but it's just gonna be band interviews for a bit, I think, unless I have a juicy nightmare. (Phantasm Ravager Oct 24 at the Rio!).
Posted by Allan MacInnis at 10:49 AM