Bronsonquest 2: Curse of the Movie Diet

I've been on a bit of a DVD diet, for various reasons, but mostly monetary. Much as there is still stuff I want, still stuff I'm just learning about being released on video, at my current level of employment, I can't afford to be spending $30 and $40 on DVDs and Blu-Rays, if in fact I ever could; even HMV 2/$20 deals have been seeming kind of expensive, given the nature of the market these days. At a time when you can often buy used DVDs for $2 or $3 at thrift stores, how can you justify EVER spending $30 and up for movies? I still haven't sworn off the cheap stuff, if I find cool movies for a buck or two, but spending more than five bucks on any given vid is an excess I can't really afford. I formulated a list of must-haves that allowed me to break my fast, but otherwise I swore off buying new titles back in June... 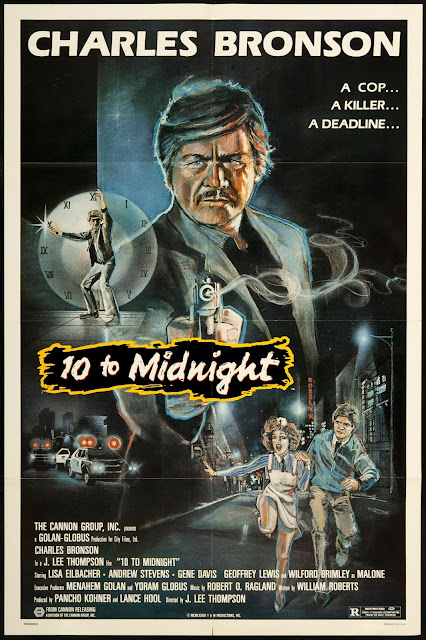 Then came Bronson. It started, as I said when I did my big, failed Bronsonquest to Surrey, with Robin Bougie, who turned me on to 10 to Midnight, a film I had not seen since my teen years. It was striking mostly back then for the scene where Bronson whips out a sex toy found in the apartment of a murder suspect and asks him what it's for, finally bellowing at the creep, "It's for JACKING OFF!" The first and only time in cinema history that I'm aware of that masturbation has been used as an index of homicidal tendencies. The scene made me acutely uncomfortable, watching the film with my parents at age fifteen, because those were my five-times-a-day years (not that I ever owned technology like that pictured. It reminds me a little of the baby in Eraserhead). 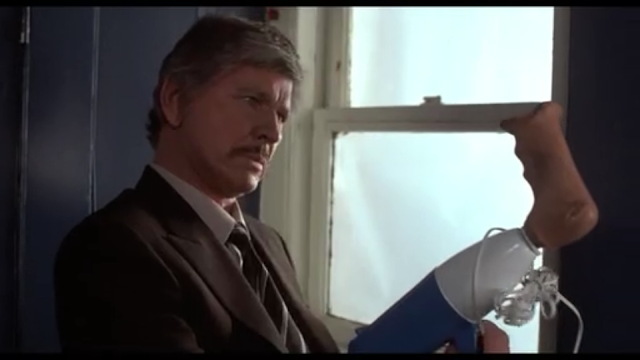 Anyhow, who knew: 10 to Midnight is a pretty great (if sleazy and lowbrow) film! I had kind of written J. Lee Thompson off as a hack, back in my snobby teens, in part because watching movies on VHS is a terrible way to try to appreciate the artistry of a filmmaker, and in part because I never had bothered with the films of his considered classics (I still haven't seen The Guns of Navarone). Watching 10 to Midnight on DVD, I was impressed at how well it held up. The whole NRA-lovin' vigilante conservatism of Bronson's persona is uncomfortable, of course, but what's exceptionally interesting about both this film and Thompson's other late, great Bronson vehicle, Kinjite: Forbidden Subjects is that the films do a lot to undercut that image, to trouble it. In Kinjite it's harder to miss: Bronson's own desires to punish a man who sexually abuses young girls is unambiguously tied to his sexual attraction to his own daughter. But 10 to Midnight - which Bougie points out is referencing the murder spree of Richard Speck - sort of revels in its bad guy's perversity a little too much, such that Bronson's own ultimate turn to vigilante avenger seems less like a manner of punishing the guilty than joining them, breaking the law for your own sense of satisfaction. It's not quite as smart (or overt) about it as, say, Martin Campbell's brilliant Gary Oldman/ Kevin Bacon vehicle Criminal Law - the most intellectually stimulating vigilante movie that I'm aware of, even better than Peter Hyams' The Star Chamber, and complete with a very troubling (sub?)text about abortion - but there's more going on in this film then meets the average action-movie-consumer's eye. And Bronson, unlike steely-eyed Clint Eastwood, has a sensitivity to his outrage: he's not just punishing bad guys, he's positively scandalized by them, saddened, hurt, personally offended at the failure of the American justice system. He's righteous, but not JUST righteous; he's porous, human, vulnerable, even at times afraid... 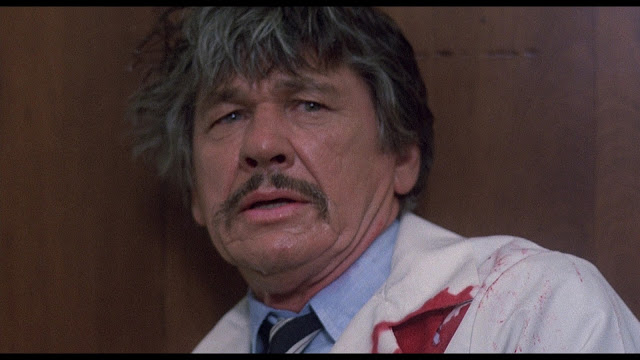 And, you know, that desire for justice is a powerful thing, not to be taken lightly. It's often exploited in a sort of down-with-due-process/ up-with-private-gun-ownership American fascist kind of way, but there's still something there, some bleeding wound in our society that I'm not immune to feeling. Any time I read about a highly dangerous sex offender - the balaclava rapist, say - who is being placed back in a community I feel it. Why even have a prison system if people deemed highly dangerous are allowed to be out on the streets? There's an element of right-wing media manipulation behind such stories, but, sorry, if you behead a fellow passenger on a bus and eat bits of him, for instance, I don't care how well you respond to treatment, or how mentally ill you were when the episode happened, there's no way you should be allowed on unsupervised outings a few years later. I mean, Vince Li might be a really nice guy, and I'm glad he's doing better - I don't want someone to go all Bronson on him or anything - but I have faith enough in neither his meds nor his doctors to want to take chances. I actually personally know someone who had a brain trauma that led to him committing murder, and I've thought at times of sending him chess books or crime novels or other things that he likes - last I heard he's in an institution in Newfoundland, and may still have some of his wits about him, dangerous and damaged though he is - except that I would probably have to print a return address on the envelope, and in no way do I want this guy, whom I once counted as a friend, to know where I am, because I don't want him to turn up on my door with happy news that they let him out of the institution, you know? Again, I don't wish him harm (the family of the guy he stabbed to death might), I just think that once you demonstrate a capacity for criminal violence on a certain level, you gotta permanently lose the right to mingle at the mall. Movies like the Death Wish series give vent to the feelings of impotent disbelief and moral outrage that such stories can engender, when the system totally fails victims of crimes, totally fails to protect society, and I do believe such things happen fairly often... 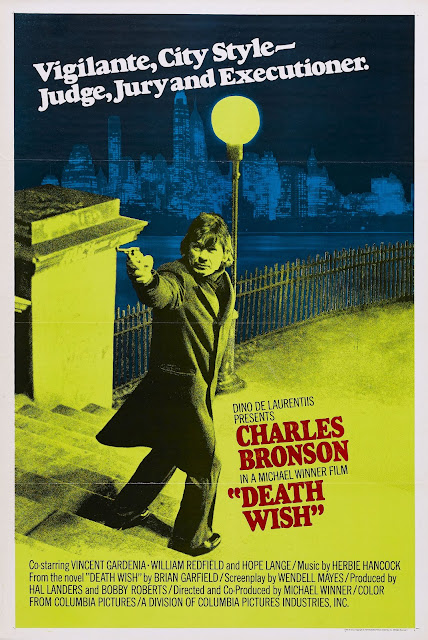 Anyhow, I took a brief break from the diet to grab Mr. Majestyk, which proved a kind of disappointing outing, especially given the cast (Al Lettieri! Paul Koslo!), director (Richard Fleischer!) and author (Elmore Leonard!). The high points were a bunch of melons being shot by guys with machine guns - I mean, maybe Gallagher would like it? - and some rather impressive (and infamous) stunts with the titular character's Ford pickup, which takes such a beating (and keeps running) that it ended up being used by Ford in advertisements. The story kind of falls flat, though, and stretches credibility at a couple of points, as when Bronson kidnaps Lettieri and brings him to his hunting cabin; Fleischer - a man who made some terrific movies, but also a few dogs - seems to feel like the material is beneath him, and the result is an uninspired missed opportunity (though maybe it will fare better on second viewing, with lessened expectations? It was hard not to get my hopes up for the film with talent as stellar as the above-mentioned involved). 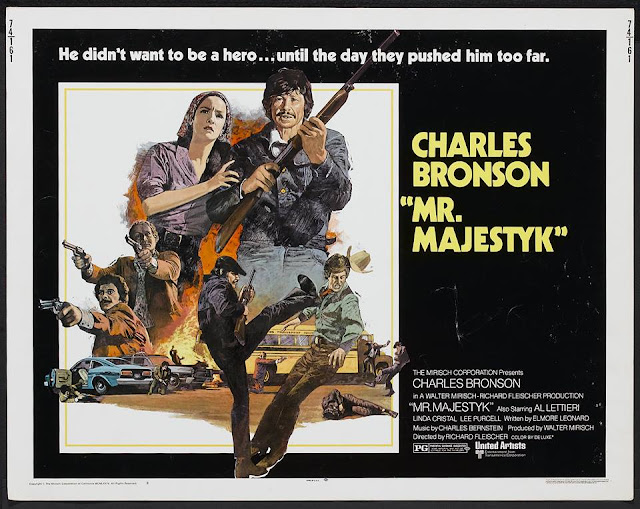 But then it's back on my diet, briefly, as Bronsonquest 2 took place the other day, with the object of finding cheap Bronson DVDs at thrift stores. I went out into the wilds of Burnaby/ New West and came back with exactly two Charles Bronsons. The first was Death Wish V: The Face of Death - which, shot cheaply in Toronto, and filled with some of the most cartoonish gangsters in cinema history, is a weaker film, but it boasts a terrific performance by Michael "Then Came Bronson" Parks as a bad guy, cutting people open with electric saws, menacing women, and cracking wise right to the end. He ends up pushed into a vat of acid by Bronson - who quips that he needs a bath - and melts on camera, so fans of melt movies might be amused, though it's quite brief and unspectacular, compared to Street Trash, The Devil's Rain, and The Incredible Melting Man. Still, I bet his role here had something to do with Quentin Tarantino rehabilitating him a couple years later in From Dusk Til Dawn. (Michael Parks fans should also seek out From Dusk Til Dawn 3, where he plays Ambrose Bierce!). Death Wish V came out on a crappy public domain DVD, full frame and lo-def, and the version I bought still had the original $2.99 (new!) pricetag on it - but it was an amusing, if somewhat distracted, watch, described in more detail here, along with an entertaining clip of a dramatic hit and run. 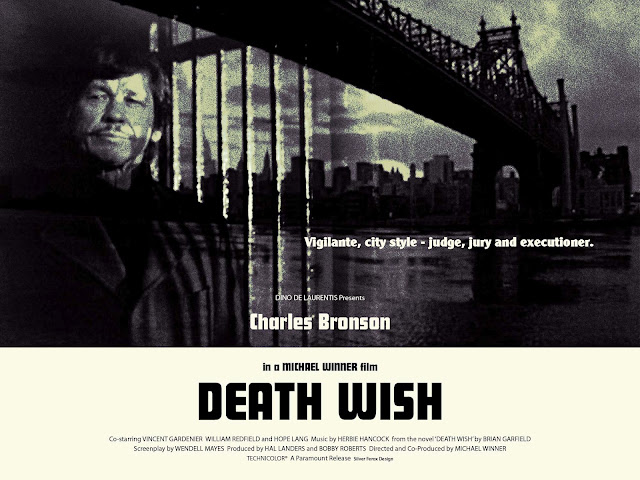 Also acquired: I upgraded my copy of The Mechanic, from this dull cover: 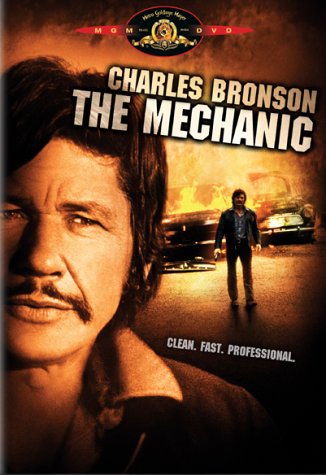 To this much cooler one: 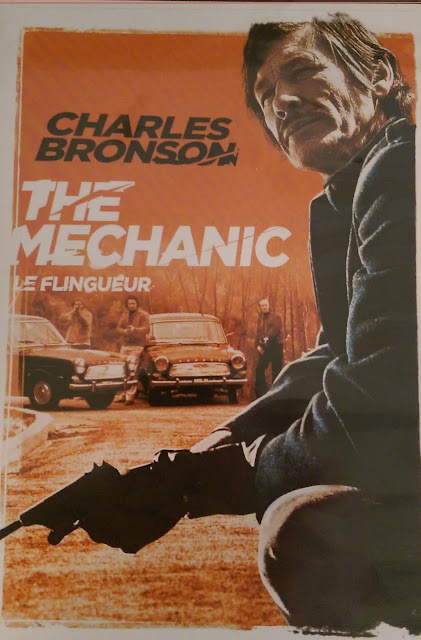 Only $3 each for those, so I was back on my diet again... but then I discovered that Vintage Media on Granville Street had a whole bunch of Bronson movies, including Kinjite and Sean Penn's sensitive The Indian Runner, which features a very touching, late performance by Bronson as a sad old man, father to the film's main characters (David Morse and Viggo Mortensen). I went off my diet for those, too, though I passed up full frame versions of Death Wish 3 and 4, and Messenger of Death, which I haven't seen. From there I went to Videomatica, where they had a J. Lee Thompson, used, and priced beyond my price range, of Murphy's Law, a film I didn't even know existed. I didn't buy it, but discovered from BJ that there is in fact a Blu with Death Wish 2-4 on it, all in the proper aspect ratio. 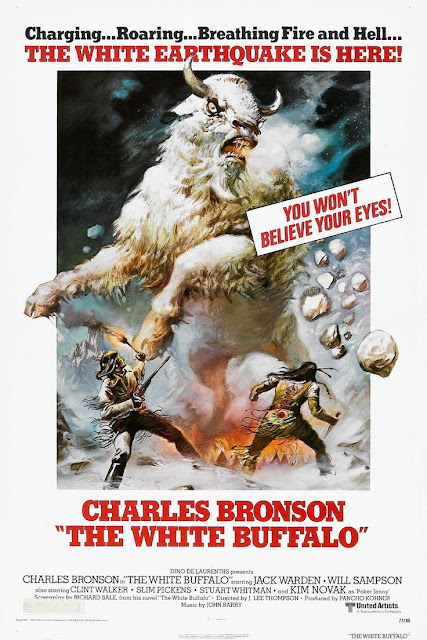 Finally I could take it no more - all this thrift store and pawn shop scrounging, hoping I would find the films I want, when they're all right out there, available for the taking... The next day I broke down, and ordered the Bronson "triple threat" of Death Wish sequels via Amazon (I know, I know, Death Wish II is the censored version, but what, it's only missing two minutes of footage compared to the new Scream Factory release, AND they're asking $30 for the uncensored anywhere I've seen it, while I can get it AND two other Death Wish movies for under $20 in the triple threat pack. Plus, um, I ordered a Blu of The White Buffalo, via eBay, also unseen by me as yet (David M. tells me it's good). All I need now is Death Hunt (terrific Bronson-Lee Marvin re-telling of the Mad Trapper of Rat River story, with full sympathies going to the trapper); then I think I will be able to rest easy, unless I stumble across other Bronsons I have not seen on the cheap. Bronsons I do not have and actually do want, if you got'em (preferably not full-frame) for less than $5: The Valachi Papers, Chato's Land, The Stone Killer, Chino, Breakout, Hard Times, St. Ives, Telefon, The Evil That Men Do, Murphy's Law, Assassination, and Messenger of Death. I realize there are more out there, but either I'm not interested or I've seen them and don't need to again... I think a couple of them might actually be on Youtube... Hmm...
Posted by Allan MacInnis at 10:04 AM