Adam Wingard's Blair Witch: well, it's not BAD, but... 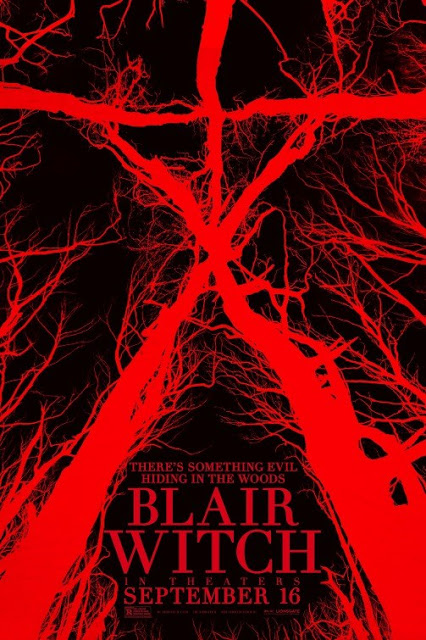 I admire the first Blair Witch Project film all to hell. It's a truly scary film that uses minimal resources to maximal effect. I was in Japan when the hype broke about the film - when people were believing it was real, or whatever they were doing, with the help of websites designed to fake people out and, I gather, some very sly and misleading advertising, including social media. With the exception of Cannibal Holocaust, it was a pioneering film, well ahead of its time, and one of the most important horror films of the 1990's, maybe even THE most important. Even without being suckered in by any of that, I thoroughly enjoyed the film, not just for its effective, visceral scares - tapping into those primal lost-in-the-woods vulnerabilities and using the heightened, frightened senses of the filmmakers to heighten our own senses ("what's that sound?") - but because it had thematic richness, involving the responsibilities of pointing a camera at someone. It belongs with films like Peeping Tom, Blow Out, The Passenger, David Holzman's Diary, The Connection and other classics of self-reflexive cinema - a sort of horror film for film studies students to analyze. Also, because the central filmmaker is a woman - the leader of the group that goes into the woods, who deals with two scared and quarrelsome men (to tell a story all about the rage of a wronged woman), it brought to play the whole idea of women as cultural producers, working in a hostile environment. There's lots of meat there, too, for feminist analysis, perhaps. It's deceptively simple, as many horror films are; it has a real richness to it, that makes it a lasting pleasure to revisit.

I also have to say, I don't mind Blair Witch 2: Book of Shadows at all, because I can see, somewhere in there, that director Joe Berlinger, co-director of the (very relevant) Paradise Lost documentaries, had plenty of ideas that he brought to the film, which got (as he acknowledges in the commentary) a bit muddled when the film was changed against his wishes. It's not a genre classic, but I've seen it twice and thought there was interesting stuff in it both times. I consider it overly maligned, an interesting and engaging flop.

Finally: I'm a fan of Adam Wingard, having seen, besides his contributions to the first two V/H/S films, three of his features: A Horrible Way to Die, You're Next, and The Guest. All are interesting, effective independent horror movies; I won't review them here, but I liked all three, and despite the ongoing critical dogpile on the new Blair Witch film, would have seen it anyhow, as I expect good things from Wingard, and am interested in following his career. That hasn't changed; I'm prepared to forgive him the odd dog.

And Blair Witch ISN'T a dog, exactly, but - sadly I must say it - of the two previous Blair Witch films and all of Wingard's previous movies, I liked Blair Witch - the 2016 sequel/reboot, opening in theatres this weekend - the least.

There are things it does well. It updates the technology at the filmmaker's disposal from the first film, expanding the range of home video equipment to include earbuds with built in cameras and a camera-equipped drone. This expands the palette of effects which can be used to scare you, and some of this is definitely engaging. The audio/ video noise, in particular - the shakycam effects, the jarring edits, the bursts of static and distortion - produce a film that is as almost as hard to watch as the first Blair Witch, but in a way, scarier: you're so engaged in trying to figure out what the hell you're seeing and hearing, making so much effort to make sense of the varied inputs, that each burst of static is positively terrifying. It looks every bit as low budget and homemade as the first film does, but I should imagine this is very much a designed effect, and that a lot of what we see has much more craft to it - especially in the editing - than might be obvious. Smartly, nicely done: a technical success.

However, even there I can't fully applaud the film, because SOME of the technology goes almost entirely to waste. The drone is an interesting addition to the filmmaker's trick bag - except it really isn't used for anything except for a couple of aerial shots of the treeline, which don't really amount to much, even in terms of furthering the story (nevermind furthering the theme, because as far as I can see, there isn't one. There IS a scene where someone climbs a tree to recover the drone, but the drone footage itself really isn't that interesting, ever). There's a plot device by which a couple from the area who tag along have an old digital video camera, shooting on tape, which is mentioned; except it isn't used to amount to anything either - what thematic resonance is the new-versus-old technology supposed to have, exactly? (There is the possibility that some of the footage they shot - not the first film, but a Youtube video that they uploaded - was faked by them, but it doesn't really get developed beyond mentioning that). Plus a huge segment of the film takes place where the man with the DV camera breaks away from the main group and is lost, returning twice in the film, each time with the camera, up and running; yet no use is made at all of the video he shoots when NOT with the main group, nor is there any acknowledgment that any footage from this time exists, even though the material he shoots before and after he breaks away is included. There is one ranty speech near the end from him that might mitigate some of my concerns, here - I didn't understand a word he said, so there might be something I missed - but it seems like there are some serious lost opportunities here; maybe they'd make the film less parsimonious, if it tried to follow two groups into their ordeal instead of one - but at the very least, they should make some acknowledgement of WHY the footage, presumably recovered with the rest of it, is ignored.

It's also frustrating that the film pads out its cast with two characters (black, sadly) whose purpose seems to be to suffer and die and disappear completely from the movie to ratchet up the fear when the white characters must face their ordeal; and that the film initially proposes to be a sequel than a remake, following the brother of the female filmmaker into the forest, looking for his missing sister, but ends up being more or less a rehash, repeating various elements (noise in the night, stick figures left outside the tent, running through the woods, scary dilapidated house). There's a point where the film SEEMS to be going in a different direction - when it's discovered that the two locals who are tagging along with the film crew are faking parts of what's happening, for their own motivations - but almost as soon as the film raises the hope that it's going somewhere different, they more-or-less disappear, and everything we get from then on is very, very familiar.

That would all be fine, though - body count fodder, a few unanswered questions, some missed opportunities, ultimate repetitiveness - if there were SOME semblance of an idea uniting it all. It doesn't have to be the SAME idea as the first film (the responsibility of pointing a camera at someone,  the perils facing a female in a position of power), and in fact, CAN'T be, since EVERYONE in the film, more or less, has a camera at some point, EVERYONE is a filmmaker, and the leader is a man. The idea that Heather's brother is responsible for everything that happens, that he's led people to their doom in the quest for closure with his missing sister, IS tabled as a possible, alternative theme, except it's not developed at all: he barely talks about his sister, no one else had a relationship with her, no one else seems to have seen the first film, no one mentions the other people who disappeared, and no one talks about their own relationship with the past (or seems all that under the sway of James, the man looking for his sister; he just seems like another member of the group, more or less). If Wingard had his own theme that he was trying to introduce into the film - about throwing good money after bad, as it were - it looks like it mostly got left on the cutting room floor*. You're left with a film that is technically proficient at ratcheting up the tension and scaring you, but that doesn't actually seem to be about anything at all.

Which is okay, you know? It was fun to watch on the big screen. I got an adequate amount of sensory gratification, got that feeling of intense attentiveness that a good horror movie can produce. And I really enjoyed the dark ambient closing credit music, hoping that it might be Harlow MacFarlane's contribution (it did not appear to be, though the film, by the way, IS Vancouver-made, and Harlow may indeed have had a hand in it; his partner, Felix, certainly did. People who like the closing music should check out Funerary Call). But given a choice between re-watching Wingard's Blair Witch or re-watching a) anything else Wingard has done, or b) Joe Berlinger's Blair Witch 2: Book of Shadows, Blair Witch is going to lose every time. I think if I had a chance to buy it on Blu-Ray for $3, I would pass.

I can think of nothing more damning to say.

*Added a bit later: there was an interesting comment by someone who read the above review over on Facebook - a defender of the film - who said he took it to be about the futility of searching for truth, noting cyclical elements in the film (the lightning-blasted tree, the girl in the mirror). They're "down the rabbit hole," a motif given a very concrete expression later in the film; he thought it a very Zen-like film, and used that to connect to Wingard's other work He didn't elect to comment here, tho', and I remain unconvinced (and am not sure I fully understand what he was talking about). The main thing that lingered after posting my initial reactions was a confusion about whether the first film even was supposed to have existed, according to this one. Heather, the filmmaker from the first movie, is mentioned, as I note, but only, as I recall, in the context of a video uploaded to Youtube... it's a little puzzling. The other thing that stayed with me that I didn't note - I'm sorry if these are local actors, but no one in the movie was particularly interesting to watch. Maybe it's just that they weren't given very much interesting stuff to do...

Anyhow, Wingard I guess deserves some credit for having made a film that's still slightly irritating to me two days after seeing it.
Posted by Allan MacInnis at 1:16 AM