Ed Hurrell: Stabbin' Vancouver in the Abdomen since 1965 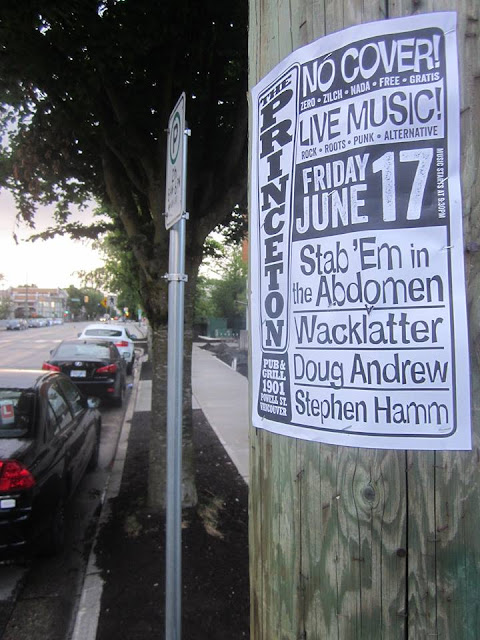 I do not know Ed Hurrell all that well, but I like him well enough based on what I've seen; I mean, how can you not like someone who gets up on stage with David M. during a NO FUN Alone at Christmas show to do Barry McGuire's "Eve of Destruction," rewritten as "Christmas Eve of Destruction?" Add to which, I've caught him with Pill Squad, the Liquor Kings, and I-don't-really-know-what-other bands, and seen him in the audience at a ton of local gigs (most recently Wreckless Eric, who could have had some of our pizza if he'd wanted; we gather he was hungry). I've never seen Ogre (for whom Ed used to sing), never seen Stab'Em in the Abdomen (doing a gig at the Princeton this Friday with Wacklatter, Doug Andrew, and Stephen Hamm), and I probably haven't seen a few other Ed Hurrell bands, on top of that (tho' I did catch a later gig with the Liquor Kings and enjoyed it). But I do hope to catch Stab'Em in the Abdomen at SOME point. It won't be tomorrow, I don't think - so once again - as is tradition here at Alienated in Vancouver, I'm writing about a gig I probably won't actually BE at. But all the same, here's a mini-interview, by email, with  ED HURRELL!

No, wait, that made it sound like I'm about to interview a talking horse, didn't it? Let's try that again: here's a mini-interview, by email, with ED HURRELL! 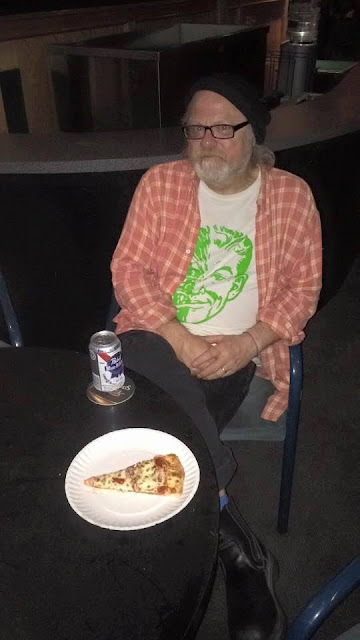 (This was all the pizza Ed was allowed)


Allan: Are you old-school Vancouver, or a transplant? When and how did you arrive on the music scene here, and what was going on at the time? What were the first gigs of significance you attended?

Ed: ...been here since 1965 from rural Manitoba. I mean really rural - outhouse/ well water/ wood stove, the whole bit -.Jed Clampett stuff. I've been going to Vancouver "PUNK" shows since the first one at the Japanese Hall, in 1977, with the Furies, Dishrags and the Skulls [who I don't think actually played that night!]. Punk was no shock to me as I'd been thru Iggy and Bowie and the Dolls and good glam bands....Where glam was 'femme,' punk was more 'thug.' We'd go to the gay bars 'cos they always played the best music. Even tho we were straight they were very nice to us, allies even back then. This is about '72-'73. 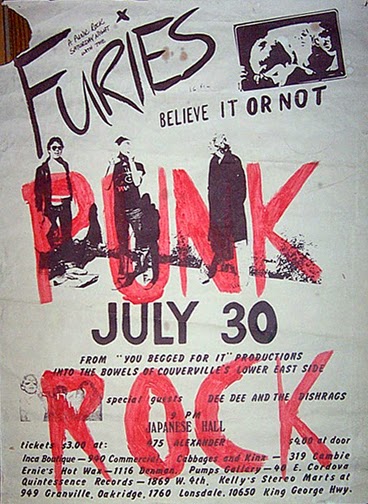 What was your first band?

"VOID," in hi-school. We played a gig or two then they fired me 'cos another bass player had a 'real' fender bass... oh well...

How did Stab'Em in the Abdomen form? Are they, like, "your" band? Who came up with the name? Did you release any albums back in the day? Who was in the original lineup?

Stab 'em formed in my basement, having fun and drinking, with me, Mike Keeping And Tommy "demon" Chettle. Mike wrote lyrics and I came up with the goofy riffs. Tommy sang and made up genius poetry off the cuff... One that comes to mind is "Religion Makes my Dink Itch" As to it being MY band I guess so, since the other guys were too shy to play in front of people. I knew Barry Taylor who was in Shanghai Dog at the time and I played him some tapes we'd done. Doug Andrew and him came over one night and we hacked out a set. This was the days of the "Fuck Bands"... fun... The fab Wallys were around to fill in when Doug and Barry weren't available. We recorded one song, "The Dead Want to Live," that appeared on the Hollow Weiners 7" Ep... 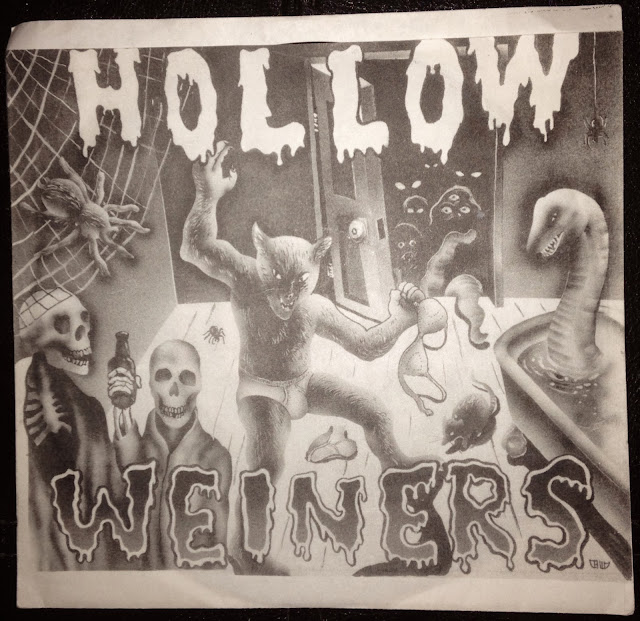 I had that! But I only remember the Scissors' "Underwear Wolf" off it, actually ("ah, skidmarks! I can't wait to get home and make some soup!").

The lineup was me - guit/vox, Wally Moss on guitar, Dutchman on bass, and the late Steve Laviolette drums (yes, Mike's younger brother...Ex Braineater). Our song was greatly edited for the record - Billy Barker was spooling tape onto the cutting room floor, to make room on the record - mostly guitar solos and weirdness...Heartbreaking... oh well...

Eek, sorry to hear that. So what was the biggest show you did? What was the worst? Any memorable opening slots? What was a typical show like?

Biggest show was probably a the Lonestar Hotel with Slow and Chainsaw Running. Wimpy Roy played keyboards with us at that one. The band has always been an ad hoc sort of thing, with rotating members, and still is. The worst show and last one, before I quit, was in 1986 (?). It was a buncha bands at a pizza joint on Hastings. We went acoustic, with Lev Delany on guitar, Val (before CUB) on upside down buckets and me on guitar and vocals. It was dismal. I remember Buck Cherry looking at us with a "What the fuck is this shit! Shut up!" look on his pan... hahahhhha...We played many opening slots, worked for beer, cheap...Typical show... well the usual stuff. I learned early on, if you practice hard and play good the audience don't care. Play shitty and sloppy and we'd get the same response: polite applause."When's the real band coming on?". 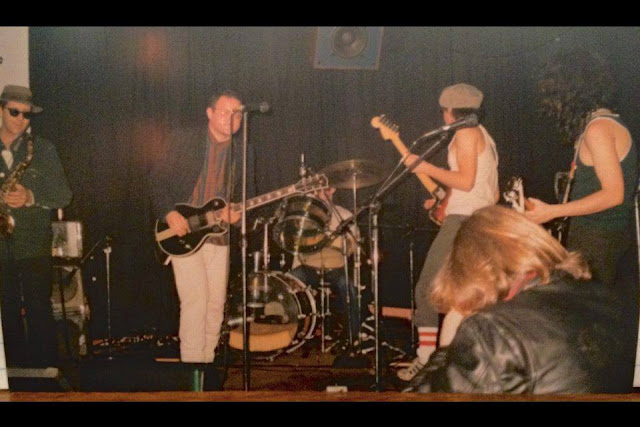 When was the first show where you got back together, and what motivated it? Has your music changed much? Who is in the band now?

Lana's, about a year or so ago. ...motivated? HUH? Well , Liquor Kings broke up, and my other band Ragged Souls ended  'cos the singer got brain cancer and died. (Hey VIC! Wherever you are!!). I was lookin for some project and I had all these songs that hadn't seen the light of day in 30 years! ...so, WTF, try 'em out. They're pretty timeless. We were never PUNK actually. Power pop, for lack of a better term, but we swore a lot and sang about unsavory stuff so we sorta got lumped as punky. Shows now haven't changed a bit. We all play our instruments a little better, 30 years of practice will do wonders!! (HAHA). We got Dutchman from the ol' Wally band, Hamm was an old Stabber, and there's me , Mikey Lav from the L.K.'s and John Moogk, an old pal from Tankhog days.

What was your history with Ogre, anyhow? (Was Hamm in that band? I notice he's opening... any fun Hamm stories?). 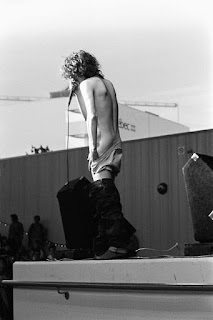 Ogre...ahhhh. Started out as a fuck band after Slow ended. Hamm on bass and Lev & Terry Russell on double kick drum sets - four fuckin' kick drums!! Man it was awesome. Their original singer quit after one show. I was at a rehearsal and they asked if I  was interested. I tried out and the rest is history. One good story is our bus freezing in Edmonton in January 1988."Sure we'll come out and play some shows!" ...duh. "Block heater? What's that?"

Were you at the infamous Expo 86 show when Slow got the independent music fest cancelled? Or any other infamous gigs, like when Danny Shmanny of the Spores did the lasso thing with some cow intestines and pelted the audience with blood and cowshit?

No, I missed that one..too bad. I saw Slow when they were called SISU, or something like that, at the notorious Stalag 13. I could fill volumes on that place!! Fire trap, danger of electrocution, etc... Many excellent shows there tho. No none was ever hurt..Speaking of cow guts tho', one Ogre show at the Venue (Now the Roxy), we had a dummy crucified on stage and the belly filled with cow guts and organs. Well, this got pulled into the crowd and of course was torn to bits. I was singing when a raw liver hits me smack in the side of the face. I've always been a DADAIST and even then, thought to myself "WOW! This is a true DADA moment"... I laughed... 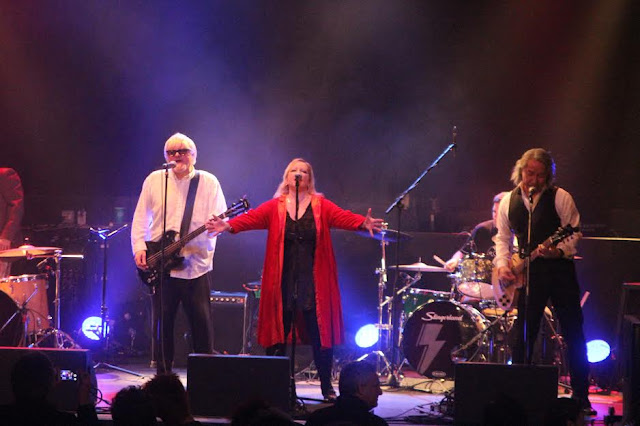 Pill Squad at the David Bowie tribute, February 26, by bev davies, not to be reused without permission.


How did you end up with Pill Squad? 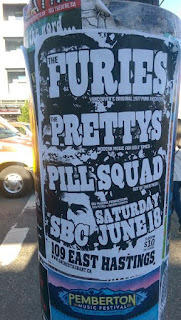 Pill Squad asked if I wanted to join... they'd heard the Liquor Kings had split and their bass player (hi, Gord!) had left so it was all timing I guess. They're a swell bunch..I'm having a blast. You know I haven't been to the SBC yet? [Pill Squad plays the SBC with the Furies on Saturday, see more on that below]. Weird that..just haven't gotten around to it. Gonna be a blast playing with the FURIES!! Full circle: see #1.

What happened with the Liquor Kings? Any chance you'll get back together?

Anything else you want to say about either the Stab'Em or Pill Squad gigs?

Not much to say except I'm not a MEANIE... I just found out some really nice folks were a bit scared of me - my hard ass personality on Facebook I guess... Feel free to tell me to fuck off anytime... I'm cool with it...hahaha... 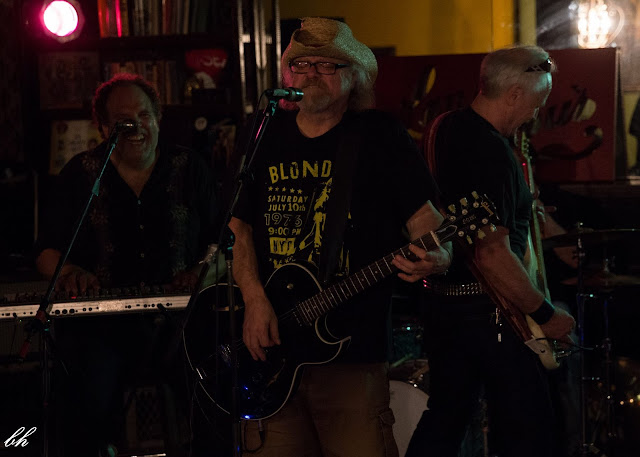 Stab'Em in the Abdomen plays the Princeton with a host of other bands (and no cover) on Friday, June 17th

EDITED TO ADD: This cartoon, courtesy ARGH!! Who I think took the photo of Ed with the slice, above. 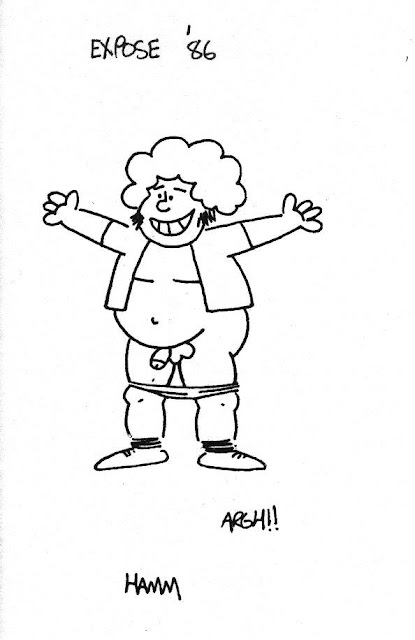 Joe Keithley confirms it: "We were not on that first show at the Japanese Hall, but i saw the poster which said 'punk Rock - it will make you puke,' and that intrigued me, so i got the Skulls onto the 2nd show at Japanese hall."