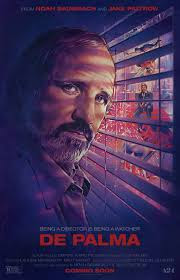 I like Brian DePalma's films a lot. I know people who don't - who dismiss him as a derivative, maybe misogynist, style-over-substance hack - but I think, in fact, that that`s getting to be a minority view, critically, that slowly the dominant discourse around him these days is turning pretty positive, that people are more and more recognizing that, for all his borrowings of Hitchcock, he's a person who thinks quite a bit about his images and his craft, and has - often between the lines - the capacity to be harshly critical of America, masculinity, and the status quo - often all at once. He`s always had a few interesting and vocal admirers, of course. Pauline Kael was one (though her praises of Casualties of War go far even for me, and I respect the film a lot). Quentin Tarantino once admiringly interviewed him (I think for the softcover-book-format film magazine Projections) about Blow Out, his conspiracy thriller starring John Travolta. And it's been refreshing to see the Criterion Collection putting out a few items from his back catalogue over the last couple of years. There are definitely duds in DePalma's body of work, of course - his treatment of James Ellroy's Black Dahlia was a serious disappointment, in particular. I caught it theatrically on a trip to Toronto, during its opening week, and I'm an admirer of the novel; I came away positively dejected over how little I had cared for what I`d seen, which managed to even be duller than L.A. Confidential (another Ellroy adaptation; wish someone would do him justice, maybe with a big screen American Tabloid; somehow the best of the films based on his work - Rampart, Street Kings, and Dark Blue - are not adaptations of his novels, but original screenplays). I can`t speak much on Bonfire of the Vanities - it seemed at the very least a faithful adaptation of Tom Wolfe`s novel, so I never got why it was so reviled - but even films of DePalma`s savaged by critics, like Mission to Mars, manage to, oftentimes, be more interesting and fresh than more so-called respectable movies they share screenspace with...

The best of DePalma`s films, by me, are the films that are most overtly his, the ones that he plugs, name-over-title, as Brian DePalma films, which he doesn't, always; for the first Mission: Impossible film, he subordinated his brand to the franchise and the star, Tom Cruise, and kept some of his signature flourishes in check (split screens, say, or smirkingly deliberate audience-torturing suspense, or guilty spectatorship, or explicit nods to Hitch). It's still a fine thriller and very watchable, mind you - maybe my favourite of them, even still - but it's not really all that "DePalma," if you see what I mean, and not that different from the other films in the franchise (John Woo probably was the filmmaker to most noticeably assert his own brand onto those films, and his is the worst of them, so...). 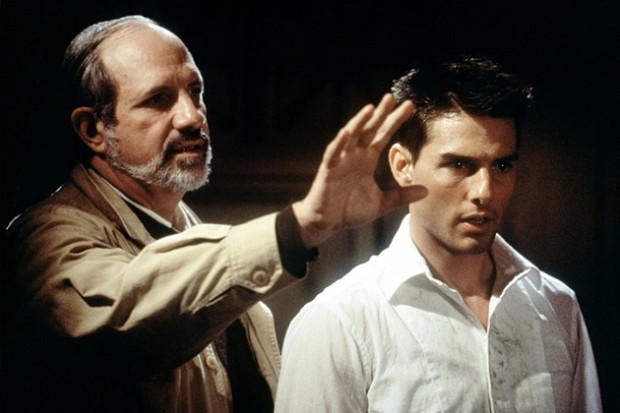 Anyhow, because I like DePalma, I will be seeing the new documentary about him on the screen, when it opens at the Vancity Theatre (July 1st). I'm also excited about the retrospective of his films that accompanies it, though I'm sad that it is missing some of his very early work - especially Hi, Mom and Greetings, both with a young Robert DeNiro and both packed with anger, wit, and resonances for DePalma`s later cinema, including some very telling meta-cinematic reflections. These films in put everything else he's done in a somewhat different context, provide a decoder ring to help you appreciate just how smart, in fact, the man is, and I suggest that people with an interest in this series who haven`t seen them seek them out. I would have liked a double bill of Casualties of War and Redacted, too, which I gather was considered and deemed impractical for some reason or other; those two films, especially together, will also help one appreciate the political anger that informs De Palma's work, which it's quite possible to miss in some of his more mainstream movies. They`re imperfect films, maybe, but essential; Redacted is certainly the angriest film I`ve encountered about the recent US adventures in Iraq... 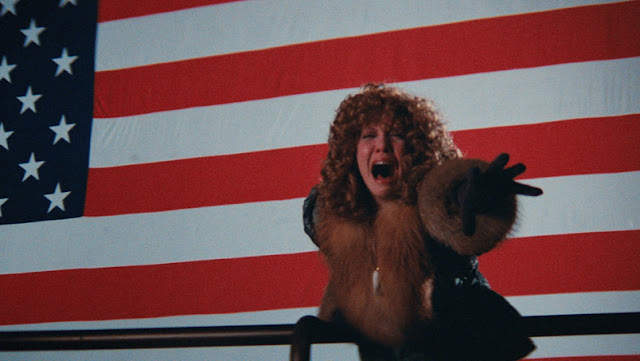 All the same - regardless of what isn`t there - I'm delighted to be able to see some of these films on the big screen. By coincidence, my two favourites are right at the top of the listings, starting with Blow Out. This is DePalma's masterpiece, maybe, punning in the title on Antonioni's Blow Up. It's a probing of American cynicism in the wake of Watergate, with a pinch of Chappaquidick thrown in for good measure. Innocence does not fare well in DePalma's America, and experience can lead you to despair: John Travolta plays a movie soundman who, out recording sounds for his library, manages to capture the audio of what he believes is an assassination attempt. The lovely Nancy Allen - even lovelier in Dressed to Kill - plays an at least somewhat innocent girl in a sleazy business who gets caught up in the conspiracy. DePalma regular Dennis Franz (NYPD Blue) is at his greasiest and funniest; John Lithgow is a psycho, playing it to the hilt, as always.

I've had friends I've played it for get seriously pissed off at me for showing Blow Out to them, but I don't want to say why; people who have seen it will know. It's actually pretty sad, pretty angry, pretty bleak - but also very, very intelligent, and a supreme exercise in cinematic craft; I would guess that it`s probably the film of DePalma`s that most pleases Lars von Trier. It's the film all DePalma naysayers need to see, to be able to fairly evaluate him; people who go on about what a hack he is lose my ear or any attempt at engagement when I find out they`ve missed this movie, because they just don`t know what they`re talking about. Travolta is great, and there's a panicky revolving-camera scene that is up there on my list of the best-ever bravura camera stunts in mainstream cinema. If you're only going to see one of these movies, see this one, screening July 14; it may make you want to see more. 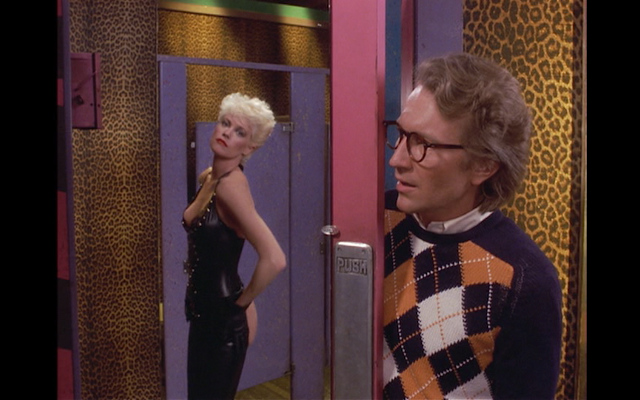 Then there's  Body Double - which plays with Rear Window in the same way that Dressed to Kill plays with Psycho and (we gather) Obsession (which I have not seen) plays with Vertigo. Screening July 15th, this is, by me, the most fun and the most funny of De Palma's engagements with Hitchcock. It's all about voyeurism and spectatorship - in life, in horror movies, in pornography, and in "detective work." There was a time when I rejected the film for its violence against women - and chuckled to see that Patrick Bateman uses it as pornography in Ellis' American Psycho. But if I were teaching a course on self-reflexive cinema, and had to choose between Peeping Tom - complete with the Laura Mulvey commentary track - and this film, I'd choose this film. Plus Melanie Griffith is great, and Craig Wasson is one of my favourite-ever "everyman shmuck" characters. The actual "body double" scene that plays when the credits role are a reference to the making of Dressed to Kill, by the way. (Heads up Keith Gordon fans, this is is biggest and maybe best film as an actor shy of Christine...).

There's lots else worth seeing. I know Phantom of the Paradise is a cult hit, particularly among music geeks (no, I was not at that particular July Fourth Toilet concert, sorry to say); but I've only seen it once, years ago, so I can't really evaluate it. Femme Fatale is giddy fun if you're a DePalma fan ("arguably his most underrated movie," the program says, though I'd give that honour to Snake Eyes, not screening). It's kind of up there with Raising Cain (also not screening) as an audacious, excessive film that people with an investment in and understanding of the filmmaker can just delight in while everyone else looks at us funny (it may not be the best film for noobs). On the other hand, The Untouchables, which I saw not too long ago with my Mom, is far more interesting now (and far more of a De Palma film) than I gave it credit for being at the time; I wrote it off, once, as not really BEING a DePalma film, just a blockbuster-for-hire, but in fact, it's a pretty rich, exquisitely crafted movie... I have a friend who loves it, another who hates it; I can only say that I liked it a lot more, on last viewing, than I expected to, and am full of respect for its craftsmanship.

Of the rest of the films, there are some I have not seen (Obsession, Passion), a couple I don't really care much about (Carlito's Way and Carrie are both good films but I have nothing at all to say about them); and one I did not get, Sisters, which I saw knowing how much Robin Wood loved it, but didn't find very engaging. Wood had a tendency to praise films for the ideas in them, without taking into account how well-or-poorly crafted they were, which comes up in the kerfuffle about David Cronenberg that he presided over, especially when he comes out as thinking Larry Cohen's nearly unwatchable It's Alive is a better film than The Brood. It's a less politically objectionable film, maybe, but surely that's not the only consideration when evaluating a film... Anyhow, Wood makes much of the ideas that he sees at work in Sisters, and makes it out to be some sort of masterwork, which is probably taking it a bit far, and possibly set me up to be disappointed. I liked Margot Kidder, at least... 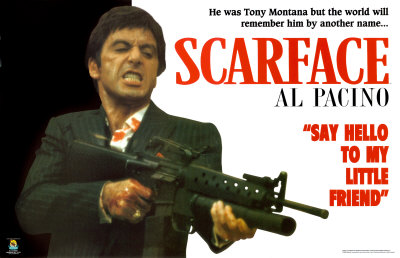 ...And then there's Scarface. That's the only film screening that I have political misgivings about, and they have nothing to do with the film per se, are in no way De Palma's fault, because they relate to developments in contemporary culture that came about decades after it was made. I simply do not care for the hip hop valorization of Tony Montana: the un-critical transformation of a blinged out, coked up, murderous criminal into a cultural icon. It's not MY culture, what can I say. Scarface is great cinema, but what has been done with it freaks me out enough that I haven't revisited the film in twenty years, however much I loved it during the days of VHS, when my friends and I watched it often enough that we could riff on lines from memory. I might try to see it again on screen simply because Tony's sister is played by Mary Elizabeth Mastrantonio, an under-rated actress who I almost always enjoy, probably at her best in John Sayles' Limbo. But she's good in this, too, as I recall... and young, and kinda naked...

All told, it`s an exciting retrospective of a filmmaker who is under-rated precisely because he is (at least to some extent) famous and successful. The main page of listings for the DePalma screenings - including both the documentary and the retrospective - is here. Thanks to the Vancity Theatre for programming these films!
Posted by Allan MacInnis at 7:52 PM