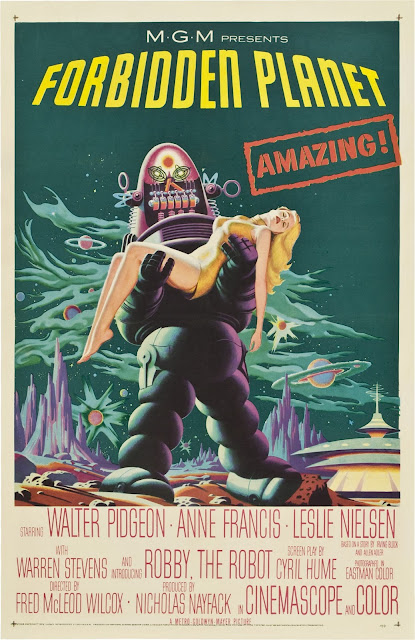 Got a perfect plan to spend Sunday afternoon, especially if the weather is wanting.

1pm: go see Forbidden Planet at the Cinematheque. Early eerie electronic "soundscapes" soundtrack, early non-comedic Leslie Nielsen role, Robby the Robot, plus it's a loose adaptation of Shakespeare's The Tempest, playing as part of the Cinematheque's ongoing Shakespeare series. And get this - the Cinematheque has NEW SEATS, which are a big improvement over their last seat upgrade, in fact (which doesn't seem that long ago, now). They're ACTUALLY COMFORTABLE! Yaah!

Next, at 3pm: rush down to Main Street to see China Syndrome at Car Free Day (they'll be at the stage by Neptoon). There are probably other bands playing of note - there are other stages, I gather, including one by Red Cat, which actually lists performers. Neptoon should have their list up later this afternoon, so check their events page - I gather performers will include Wayward Heart, Speeding West, and a couple of bands whose names I woulda had to ask the Neptoon dude to spell for me when I phoned the store. Should be online soon!
Posted by Allan MacInnis at 12:55 PM

Hey, looks like the Cinematheque also have a new 7.1 sound system installed - these are some cool upgrades! They'll have a series of films designed to highlight this - Apocalypse Now (which is a film I don't really need to see again, but which has some stunning sound design), Jaws (was the sound design particularly special for Jaws?) and The Conversation (which is all about listening, and a brilliant film to boot). More here: http://thecinematheque.ca/sounds-great

Ooh, check this out, from the Cinematheque programme:


"Steven Spielberg’s Jaws, the landmark blockbuster, sociological phenomenon, and summer-movie favourite, makes masterfully suspenseful use of sound, and features a now-iconic Oscar-winning score (by John Williams) and an Oscar-winning sound mix. Jaws will screen with a newly remastered Dolby Surround 7.1 sound mix. The 7.1 format otherwise remains, for the most part, restricted to movies (and primarily big-budget “event” movies) released from 2010 onwards."

I might actually go see Jaws again to hear this! Have I EVER seen it on the big screen? Hmmm....