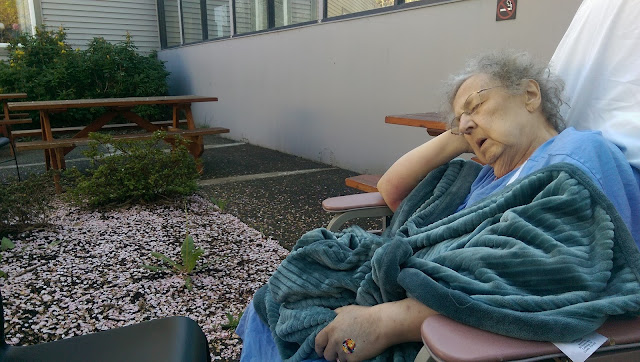 Well, we seem to be mostly out of the woods, here. Mom was alert and relatively strong today, after a week of infection, sedation, a sort of surgical procedure involving sticking tubes down her throat, and even a brief spell of delirium. She was so agitated last Sunday night that she had to be tied to the bed, which was not fun for her, but she had gotten kind of aggressive and did things like rip out her IV's, so I accept that it was for her own good. It wasn't without a silver lining, since her upset tipped the scale to her getting her own room, and my being concomitantly invited to stay with her, which I hadn't realized was an option, before. The restraints were maybe a little preferrable, even, to the amount of dope she received Monday-Thursday, which included painkillers like dilaudid, but also Halidol, Ativan, Fentanyl, and an apparently erroneous dose of Loxapene. She was so gooned Monday night that at some points that that alone was a cause for fear and alarm, with one nurse and I wondering if she may have had a stroke while she slept, so unresponsive and dazed was she... 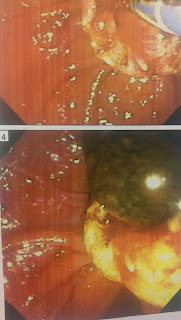 But she came out of her fog on Wednesday morning for a bit, and - Thursday's erroneous Loxapene dose aside - each day since is getting better, with her character asserting itself more and more, and her energy levels, appetite, and spirits rising. Today is the best I've seen her since before she was admitted. We spent a few hours actually interacting - talking about our days, reading a couple news stories, watching some video I shot for her, having fun. By contrast, mostly when I was sleeping in her room, earlier in the week, it was a matter of me getting her occasional sips of water, telling nurses when she needed attention, and then watching her doze off again while I read, played games on my cellphone, and (sometimes) held her hand.

For curious types, on the right is a picture of the gallstone removed from her in Chilliwack that was the culprit of all the mischief in her body. It was, I was told, a centimeter across ("a big one!"). I heard it kerplunk into the medical waste bin, I think, sounding just like a marble. I was half tempted to save it (maybe make some jewellery?) but I gather such things are discouraged.

Along the way I've learned many things: from riding with her in the ambulance out to the 'wack, I discover that paramedic slang for a coronary bypass graft (which Mom received some years ago) is "cabbage" (as in, "she had a cabbage?"); that the worst bacteria in a case like this is in many cases already inside us, waiting for conditions to be right to proliferate; and that (especially if you're not doped up or exhausted from surgery) hospital rooms are exceptionally shitty places to sleep, with unceasing noise from the hall, bleeping and blooping machines, and nurses coming in constantly with this test and that, these meds or those, some of them using booming, chipper outside voices even though people are obviously trying to rest. I also discovered that most nurses work 12 hour shifts, which seems pretty gruelling, actually. It's obvious to anyone with eyes that the medical system is overstressed and under-funded, but over all, the nurses and doctors really come through in cases like my Mom's, pulling out all the stops. There's a little too much crazymaking paperwork and bureaucracy, it seems, with a new person each day having to pore over the last person's notes to get my Mom's history down, not to mention nurses having to check each little thing with doctors, and occasional odd errors of fact and judgement popping up (like someone deciding based on short exposure that my Mom has dimentia, for which there's never been any diagnosis; indeed, the tests she's had suggest otherwise, so I was annoyed to see that written on her chart and ended up asking the person to put it there to remove it, unless she had some particular reason to think it applied. She crossed it out immediately). Of the few stable faces among those who have attended her, it's been interesting to note the differences in approach and character (like the one who leapt to medicate versus the one who withheld it until Mom was practically screaming; both approaches had their drawbacks, which were unfortunately felt more by Mom and I than the people who were making the decisions). I'm still meeting new people every day, however - new nurses, new doctors, new medical students, new therapists...

All in all, though, there's been a lot of care and patience and support for both Mom and I. They got her in for this semi-surgery in a matter of days, completely respecting the urgency of the situation; they've made MOSTLY terrific choices about antibiotics, hydration, nutrition, and keeping her comfortable; they've been very patient and understanding with my Mom's communication difficulties; and when it's come time for physio, they've pushed her without being in the slightest sadistic, getting her up and walking beyond what I would have been able to do, for instance. All in all we're very happy with the care we've received, and I mention the few glitches above more for their interest value than in the spirit of complaint; they've basically SAVED MY MOM'S LIFE, here, and I don't want to seem ungrateful. Theyve been very patient with ME, too, I must say: hell, I've even been offered a couple of free meals (stuff leftover from other patients) when I've been too busy feeding Ma to make the cafeteria before it closes (like tonight). And say what you will, Eels: the food at the hospital is actually pretty good, even that meal that turned out to have been pureed (I ate it anyhow)...

Also more than happy that while the hospital staff have mostly outsourced mealtime feeding and denture cleaning to me, they haven't even asked me to man a bedpan or empty a peebag. Much appreciated, folks, and let's keep that up, shall we?

As for Mom, the photo below kind of says everything about how the last week has felt for her (more a comment on how being in the hospital for a week feels, not on the quality of care she's received). She's got quite a bit more to come, of course, but her sense of humour will serve her well in getting through it. Tell'em how you feel, boss. 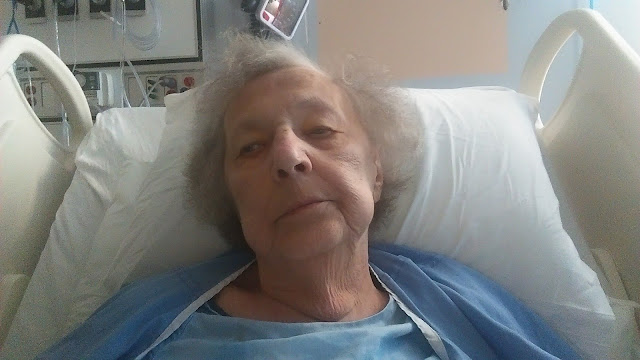