Upcoming at the Vancity Theatre: The Brainwashing of My Dad, Ben Wheatley, The Man Who Fell to Earth

You know the scenes in Repo Man when Otto attempts to interact with his parents, sitting immobilized in front of the TV, skin blue in the flickering light as they tell him about how they gave away all their savings to a televangelist? ...Or, say, did you identify at all with that darkly funny, sad moment in KW Jeter's Dr. Adder,  where the protagonist sets his mother on fire where she sits in front of the TV, as a sort of mercy killing, because TV killed her years ago, anyways? 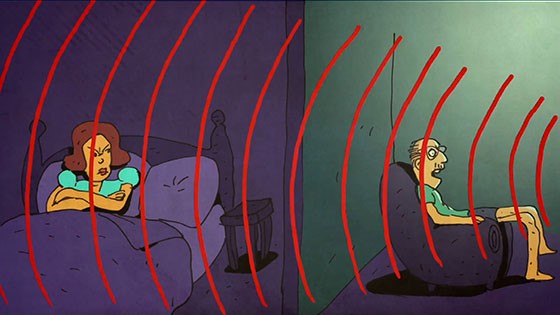 If moments like that resonate for you - if you kind of hate the television for the affect you've seen it have on your parents, steadily shifting their opinion to the right and encouraging the least noble, least generous aspects of their personality... if the words "television killed my parents" strike a chord with you, even if your parents are both still alive, then you probably want to know about The Brainwashing of My Dad, opening tonight at the Vancity Theatre. Haven't actually seen the film yet, mind you - only glanced at the writeup and thought it sounded compelling. But I sometimes cringe to my soul when I see what daytime TV my Mom has selected: from Cops to Steve Wilkos to Maury Povich administering lie detectors and encouraging Afro-Americans to scream at each other in public in the most undignified manner possible - something I have to turn off as soon as I enter the apartment - there's very little you'd actually call socially progressive in her daily TV diet. She views the outside world as dangerous, thanks to a steady diet of crime news; she's quick to point out when people "got what they deserved;" and occasionally, a really cruel mean streak can surface, which is kinda cute coming from an 85 year old woman, but still:if I play her a movie where there's a real BAD GUY, and the good guy is facing him down, she'll sometimes - if she's involved in the story - get to screaming "kill him!" at the screen (last instance of that was Breakout, an implausible but entertaining outdoor ordeal movie with good-guy environmentalist Dad Brendan Fraser being outshone on every level by a terrific villain, played by Dominic Purcell. Mom was just seething with hatred at Purcell by the end of it and cheered his final dispatch). 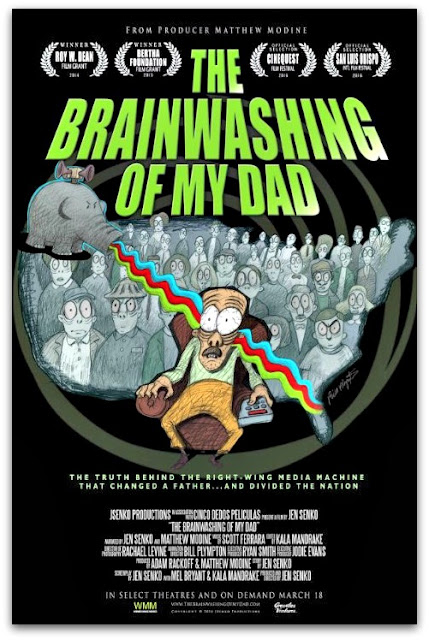 Anyhow, I doubt very much I'll get to see The Brainwashing of My Dad, but you might. So there's that. Ben Wheatley fans, meantime, will probably want to check out the special screening of High Rise, starring Tom "Loki" Hiddleston, and the Masterclass with Ben Wheatley, who looks absolutely nothing like I imagined he would, somehow. I will here admit that I have not been wild about the Wheatley films I've seen - I'm not a JG Ballard fan, for one, and thought that A Field In England came off like strained British Jarmusch - but I haven't quite written him off yet, mostly because I haven't seen the films of his that people tell me I MUST check out (Sightseers is somewhere on my list, because the trailer actually looks pretty great; I may eventually get around to The Kill List, too). But hey, I won't be there for the Wheatley stuff either, so it's moot. 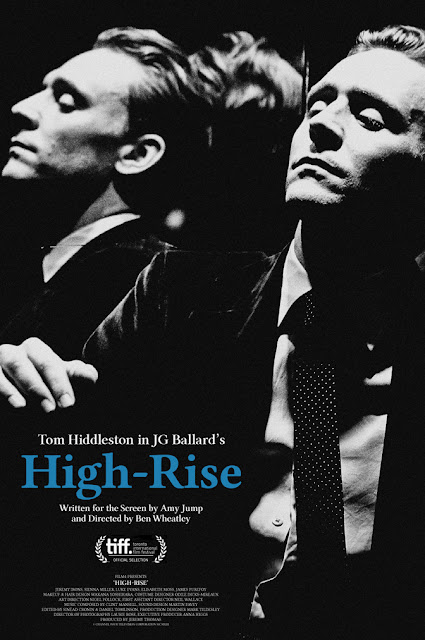 What I *might* attend, however, is Nicholas Roeg's The Man Who Fell to Earth, screening Monday. It's a masterfully creative example of Roeg at his peak - a director who for me even outshines fellow traveller Ken Russell as THE cult icon of British cinema of the 1970's, one of the most creative, challenging, interesting filmmakers out there, based largely on this and a handful of other films (Performance, Walkabout, Don't Look Now, Bad Timing, and to a lesser extent, but still on the list, Eureka; all are must-sees, if you somehow haven't gotten around to them). Bowie plays an alien who, passing for human, comes to earth to find water for his dying planet; the early scene where he walks on uncertain legs into a town called Haneyville used to have special meaning for me and the Gothy girl with whom I watched it repeatedly in my teens, because Maple Ridge - or parts of it - was also known as Haney, after Thomas Haney, who founded the town. We definitely could identify, aliens ourselves; it was like a little hidden meaning in the film, a secret message aimed directly at us.

The film is based on a fine, fine novel by Kentucky's Walter Tevis, who also wrote The Hustler and its sequel, The Colour of Money, which in turn inspired two very interesting films, though both depart from the source material considerably (the sequel moreso; the character played by Tom Cruise in the film is completely absent from the novel!). How you get from the real-world sleaziness of bus station diners and pool tables of The Hustler to aliens on a quest for water I do not know, but The Man Who Fell to Earth's Thomas Jerome Newton is the movie role that David Bowie was born to play. People unconvinced by Labyrinth and Merry Christmas Mr. Lawrence and such should take note - Bowie was an incredibly capable actor, there's just only been one movie made that was perfect for him, and this, by God, is it. I hesitate to say much more about the film, since anything else would be a spoiler; hell, even the title is a spoiler. It is not what you might say a happy film, but it is a rather deep one (perhaps with a hint of self-pity on Tevis' part, but hey, what can I say, I haven't exactly pumped that much water back to MY home planet, either, in recent years; hell, I'm not even at the hospital visiting Ma at present).

All the same, I will point out that the painting that is most frequently referenced in the film is this one, Brueghel's Landscape With the Fall of Icarus: 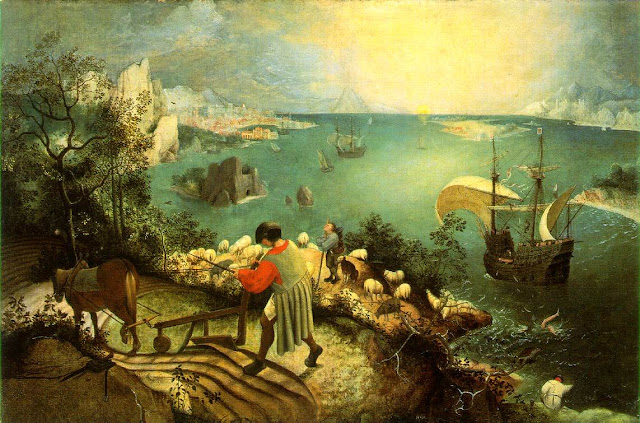 And the poem that is shown on screen, as I recall, is this, describing the above painting:

About suffering they were never wrong,
The old Masters: how well they understood
Its human position: how it takes place
While someone else is eating or opening a window or just walking dully along;
How, when the aged are reverently, passionately waiting
For the miraculous birth, there always must be
Children who did not specially want it to happen, skating
On a pond at the edge of the wood:
They never forgot
That even the dreadful martyrdom must run its course
Anyhow in a corner, some untidy spot
Where the dogs go on with their doggy life and the torturer's horse
Scratches its innocent behind on a tree.

In Breughel's Icarus, for instance: how everything turns away
Quite leisurely from the disaster; the ploughman may
Have heard the splash, the forsaken cry,
But for him it was not an important failure; the sun shone
As it had to on the white legs disappearing into the green
Water, and the expensive delicate ship that must have seen
Something amazing, a boy falling out of the sky,
Had somewhere to get to and sailed calmly on. 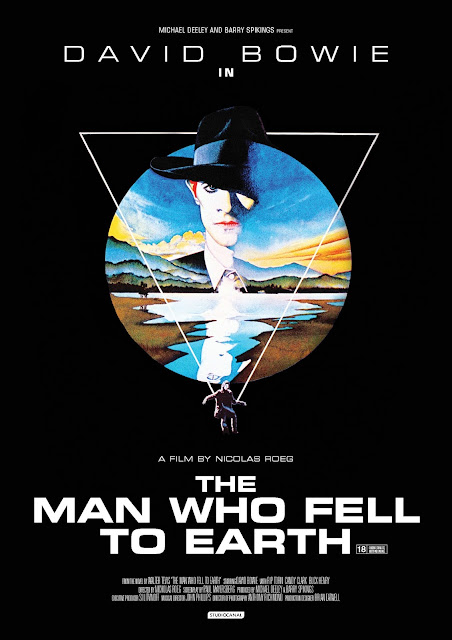 (And by the way, spoiler or not, the common thematic element with The Hustler - the novel, more than the film - is alcohol; we gather Tevis was a drinker. I suspect from his paleness and thinness in the film that the real Bowie was maybe more into heroin, around this time, but, y'know, it's a piss-poor substitute for water, too).

Anyhow, maybe see y'all Monday.
Posted by Allan MacInnis at 10:05 AM

I like Ben Wheatley at least what I've seen - AFiE and Hi Rise - but I can see why he's not for everyone though. His stuff is way metaphorical and stagey, but so much super cool imagery. Hi Rise has class war played out in an apartment building, kinda like Shivers or Judge Dredd and similar to A Field in England in the respect that the actual story is absurd. I'd say he's fully an artfilm autuer similar to Greenaway et al.