I sure will miss the Railway Club. Another severed limb for the city, to tingle in its absence for years to come. My last show there was David M's NO FUN at Ukrainian Christmas, I believe; my second to last was David's full on Christmas show the week previous. Before that I think it was China Syndrome... I'm glad I got to take my girl there a few times, it's a part of Vancouver's musical history that...

...ah, I'm not going to get sentimental or political, but I'll miss the place. 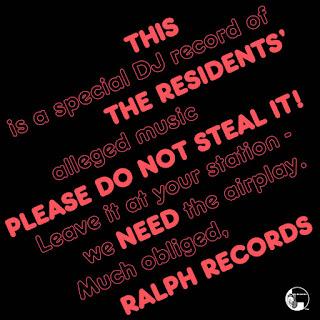 In other news, I am not going to be at Record Store Day today in any way shape or form. Happy shopping. If the Residents exclusive release is still around tomorrow and I end up near a record store, I might try to snag it, but I don't really need any more records, anyhow. There's a ton of cool stuff, but why the exact fuck is there a Justin Bieber RSD vinyl release? Do his fans actually care about vinyl?

I have stuff upcoming on Eddy D and the Sex Bombs and others, some of which will be on this blog, and some not. I can't really spill stuff that's going to appear in print elsewhere. But one show I haven't mentioned yet, and WILL be doing something on for SOMEONE, as yet to be determined: Ron Reyes will be doing a PIGGY farewell on May 6th at the Astoria. The last time I saw Piggy was, in fact, on Record Store Day at Neptoon, with a very late Alexa Bardach appearing on vocals. That was two vocalists ago! What, was that ten years ago or something?

More personally, Mom is more or less restored to a weakened version of her former self: her infections are almost under control, her spirits are good, her energy levels are okay, and she is still in the hospital awaiting rehab. I'm still visiting her every day. She has had a couple of episodes with her heart that have been kind of ominous - elevated troponin, anyhow - but then there are almost normal days, like yesterday. We watched The Judge with Robert Downey Jr. and Robert Duvall. Kinda typical story, a bit implausible at times, but nicely observed performances. I've gotten to where I kinda enjoy Downey. Mom seemed to follow the story okay, and only napped a couple of times... today we're going to try The Peanuts Movie (she likes Peanuts).

With all my hospital visits, I still haven't had the chance to see Midnight Special yet, but I did get to take Homer Flynn for dosas at House of Dosas the other night, so that's something. House of Dosas is great, if you're looking for a late night bite in Vancouver and like it spicy. It's basically a ginormous crepe filled with your choice of curry.

The Residents show was a lot of fun, too. 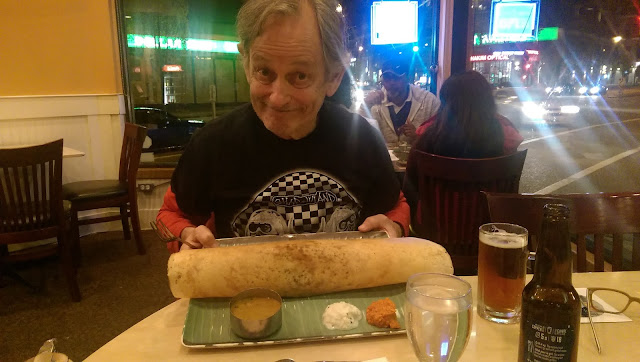 By the way, David M., that's your Santa Dog CD under his glasses.