I Drink Your Blood (You Read My Blog) 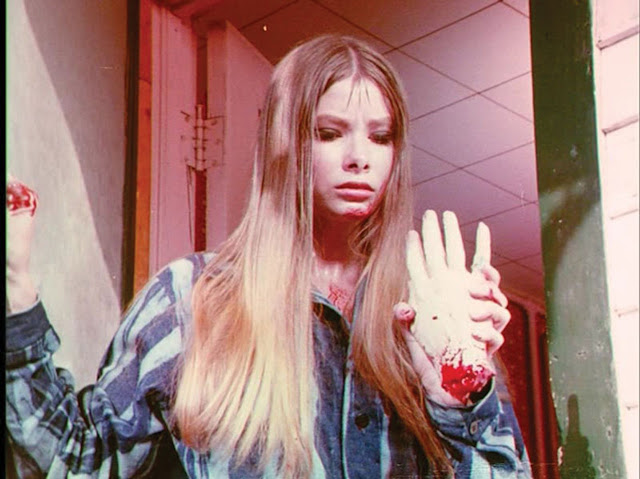 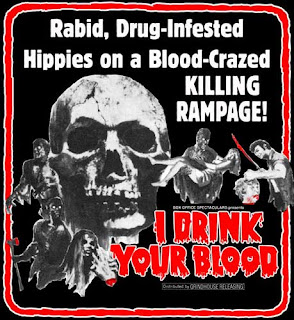 Come on, everybody, let's give Lynn Lowry a hand!

In many ways, the high point of next weekend's Northwest Horror Show, for me - taking place as before at the Vancity Theatre - is David Durston's remarkable, bloody, and vastly entertaining I Drink Your Blood, and not just because Lynn Lowry herself (best known for her roles in Cronenberg's Shivers, Romero's The Crazies, and Radley Metzger's Score) will be on hand to do a Q&A. First off, it's a film that, save for the work of inspired and committed horror geeks like Shane Burzynski - who I'll be interviewing for this very blog in a short time - would never, ever screen in Vancouver; a true cult item, it wouldn't appear in any sort of horror auteurist retrospective of the sort Romero or Cronenberg might generate, and would generally fall under the radar of anyone trying to fill a movie theatre on an average night, since, bereft of the present context - a Cinemuerte-style festival of gory horror - the film is a bit obscure to guarantee bums on seats. For me, that's precisely why it's such an inspired choice - and that's not even getting to the fact that it's a great little film, one of those unique, kind of perfect 1970's exploitationers that flows from a single premise, best framed as a question: just as Shivers can be reduced to, "what would happen if a parasite that turns people into ravenous sex fiends broke loose in a high rise," and The Crazies reduces to, "what would happen if a neurotoxic, weaponized virus got loose in a small town?",  I Drink Your Blood - which, you may be surprised to gather, is not, in fact, a vampire film - takes as its starting point, "What would happen if a group of elitist, Satanist biker/hippies were infected with rabies whilst tripping and ran amuck in Anyplace, USA?"

Well, indeed, what WOULD happen? Of course, the film spends a fair amount of time setting that particular premise up, but, since this WAS the era of Charles Manson, it actually doesn't have to try that hard to get there (acid and Satan are shoe-ins, and the rabies is made more plausible than you might expect). There are inspired performances, memorable (if somewhat hokey) gore, and the sort of commitment to the core ideas that stems from the film having been made by true believers in the form of the horror movie; there's not a cop out to be seen, and its various nasty excesses are of the sort likely to elicit cheers and whoops from the right sort of audience (unless they're tripping, too, in which case they might crawl under their seat). It's also not just a splatter-fest: a fair bit of social commentary occurs along the way, as well, though I will leave that to the viewers to sort out. 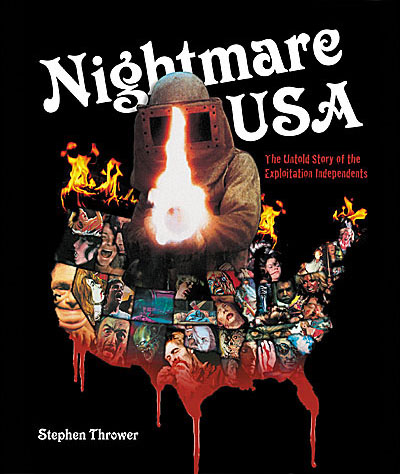 Stephen Thrower, in his essential FAB Press book Nightmare USA: The Untold Story of the Exploitation Independents - probably my favourite film book of all time, even one upping Robin Wood and Carol Clover for its sheer wealth of information - devotes a whole chapter to Durston ("Satan Was an Acid Head: The Career of David Durston.") He writes of the film that it


lives right up to its reputation and delivers scares, gross-out images, and (frequently intentional) laughs from beginning to end. It might seem strange to call such a bloodthirsty experience a good-time film, but there's an infectious wild humour to this tale of drug-addled hydrophobic Satanists, making it - in my opinion - the perfect mood-enhancer if you're inviting some friends over, or better still, planning a far-out acid party of your own... The title music sets the mood perfectly, helping to define the film's cocktail-shaker blend of horror and sly send-up.

I ain't got nothin' else up my sleeve to convince you to see this particular film (and meet Lynn Lowry!).  But a big thank you to Shane B. for programming it. I've only ever seen it one time, some years ago, and I'm not about to watch it again when it appears so soon on the big screen (projected off 35mm, hopefully a nicely restored, uncensored print of the film, because censorship has dogged this movie from the gitgo; I'm not even sure if my alleged director's cut DVD of it is entirely complete). There will be more from Shane coming soon. Not totally sure which night of the festival I Drink Your Blood screens on, but it's going to take a fair bit of crisis to keep me from being there. Y'all should follow my lead. 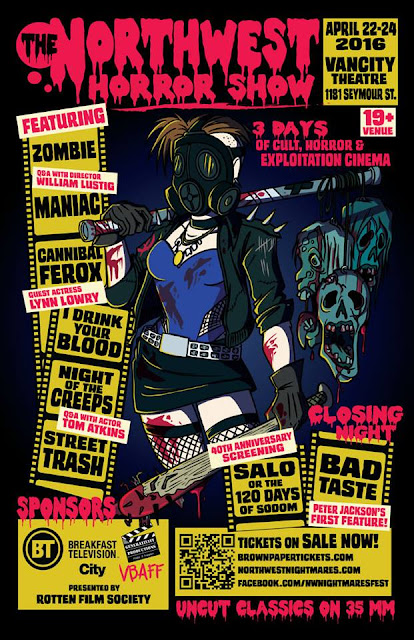 Posted by Allan MacInnis at 9:02 AM