Weird dreams of Peter Stampfel, plus Christmas Alone in No Fun City

I have just awakened from very intense dreams of going to a (fictional, dreamed-up) Peter Stampfel concert in Vancouver, I think at the Cultch, where I got him to sign a Dr. Seuss book that a bunch of other friends of mine had signed for my birthday the night before. Actually, I accidentally got him to sign a copy of Peter Benchley's Jaws instead, at first, but then ran back into the auditorium to get the right book, explaining to him that I always loved his comment that he "always wanted to be a cartoon character," and then adding to it that *I* always wanted to be a cartoon character from a Dr. Seuss book. He was amused... Erika was there, too, and various friends of mine, for the first part of this dream. Turns out, I was, at this point, living at a co-op off Commercial Drive where, in reality, David M. lives now (more on him below). Anyhow, the next day, by arrangement - after some complications in my apartment, which was a bit disorganized - I was going to take Peter out to lunch (he wanted me to select a place where there was guaranteed to be no terrorism, a weird condition even in the dream, except I think in this dream there had BEEN terrorism in Vancouver at this point). I was trying to take him to Harambe on Commercial Drive - asking him "do you eat meat?" and "have you eaten Ethiopian food?" - but I asked a taxi driver (in a crowded van-taxi filled with Japanese tourists, that was initially too full to give me a ride) about unique musical experiences in the city that Peter might appreciate, and he brought us to Stanley Park to see an acapella concert given mostly by animals of the sort they mostly don't even have there anymore, including owls, monkeys, rattlesnakes, and other creatures, creating a tune out of their natural animal sounds; then, when the vocal part came around, it was sung by a couple of naked girls, including Dexter's Jennifer Carpenter in a washtub. (I don't remember what the song was about). Peter was very pleased, and we were discussing where to go next, while watching the rattlesnakes being fed (they were real, and really scary!). Then I woke up with a crampy spine, an egg burp (which seem to go with food poisoning, with me) and a need to pee.

I do not know what this all means or why Peter Stampfel was in my dreams at all; it's not like I'm going through an obsessive phase of listening to his music lately (though I did interview him a few years ago and greatly admire his music - cf. the Holy Modal Rounders, the Fugs, or his under-sung solo CDs You Must Remember This, Dook of the Beatniks). I also do not remember which songs he may have sung during the evening's concert, though that was part of the dream, too. (Jeffrey Lewis, recent collaborator of Stampfel's, whom I have also interviewed, was not present). But I am going to take this as some sort of omen, sign, advice from the universe to try to set up a Peter Stampfel show in Vancouver, perhaps for my 50th birthday. Who knows? I would like to have an ambitious 50th birthday here in Vancouver.

In other realms, the closest Vancouver's music scene ever came, by me, to producing a Fug or a Rounder, is still David M. and NO FUN. (Nice segue, Al). And David M's Christmas concert has finally been announced, happening Dec. 20th at Cafe Deux Soleils, or however you spell that. The Fezziwig Files - an enormous, lovingly prepared document of NO FUN Christmas music, as yet unheard by me - will be available for only a short time. Act now! And if you value my musical advice, and have not yet been to a NO FUN Christmas show, go see Christmas Alone in No Fun City this year (it may not be an actual NO FUN show but it's the 30th anniversary so I hope so). 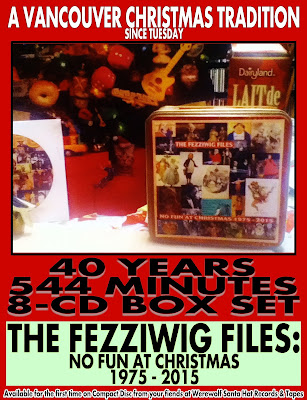 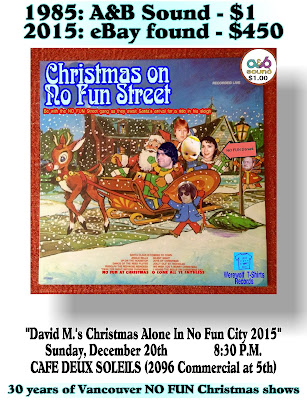 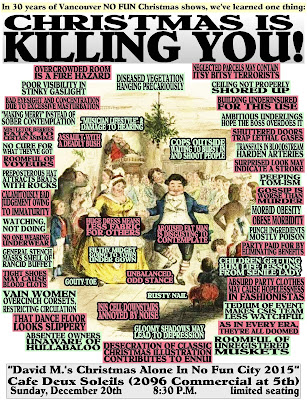 Posted by Allan MacInnis at 6:57 AM