Christmas Alone in NO FUN City 2015: a brief recap

Went to David M's thing last night at the Railway, having shat, sweated, and shivered out the worst of my cold the night before. It was great, as ever, but a smidgen different from what one expects. For one thing, David was running late, so he didn't change into his Scrooge drag, though he contemplated doing so, deciding his  suit was "more dapper." He also ixnayed the intermission. I ended up shooting video of two full songs and a couple of fragments, from about fifteen minutes into the night; I am not sure what the last song is, if it's one of the new Christmas songs David debuted or some particularly witty Brian-Wilson-esque pop tune that only sounds like a David M. original. 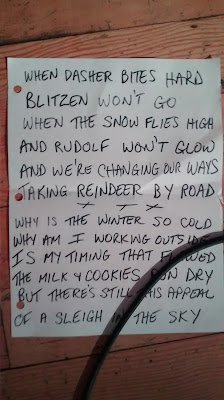 One guest not mentioned in the interview, previously posted, was Quebecois ukulele man Robbob, whose one English song, "Night of the Living Bread," I swear I have heard the Creaking Planks do. Other guest-y high points included "Christmas Eve of Destruction" from Ed Hurrell, and "Claus Will Tear Us Apart" from Pete Campbell, who did none of his originals last night, but was in fine form, doing a credible Ian Curtis imitation for the latter, cheat-sheets or no. There was also a brilliant, silly Christmas-ized version of "The Black Plague" by Eric Burdon and the Animals with Lester Interest reading the narrative, and Pete and Dave Dedrick providing percussion, including a bell and a tambourine decorated as a Christmas wreath. David M., meanwhile - onstage with his merry troupe - sang "bring out your gifts" in place of "bring out your dead." Very, very funny stuff. And there were plenty of favourites, from "XTUVVVVV" to the Christmas version of "Be Like Us" to... well, you really kind of have to experience it, hell to PARTICIPATE in it - which no one who attends can resist, in fact - to really understand. 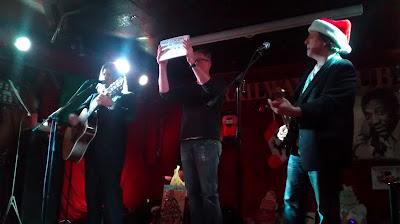 In some ways, tho, the show felt a little less dangerous, a little less unruly, hell even a little more "professional" than some of David M's past Xmas shows, though I'm not quite sure why or how; it did eventually do that thing that Mick Jagger references in that movie - achieve madness - but only after it was very nearly over and it was clear that no one was going to get shut down for walking on tables or harassing audience members.  David delayed, and slightly modified, his usual call-and-response Fezziwig song, making it a little less punishing on his audience (noobs had no idea to be grateful). Plus his uproarious crowd-involving version of "12 Days of Christmas"  - not something one should ever be present for if one has a sore throat - was also delayed to the very end, nearly forgotten, and David didn't venture out into the crowd until the third-and-second-to-last songs (sitting on laps, but not mine, though he did eventually drag me out on the dance floor). At one point he raised a chair over his head to menace. I think, the little train that runs on a rail around the ceiling of the Railway Club, but sadly - a bad tiding - the train wasn't running last night at all. 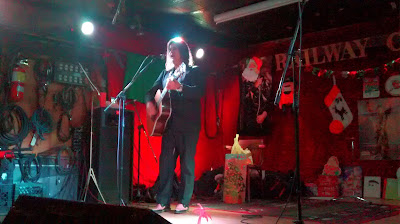 Of the various songs not heard before at his Christmas shows, David did get one semi-disapproving moan from one corner of the audience (not mine) for his mention of Elizabeth Fischer (who, actually, some people in the audience likely had never heard of; no explanations were proffered). He jested about bringing "gender parity" to "The New Reindeer," since the late Ms. Fischer has the dubious honour of being the first of David's reindeer to be female (the previous replacement for Rudolph was Lou Reed). Probably the single funniest, rudest, most memorable new bit was the hand gesture used for "Christmas is for Children," his Vic Damone-y tune that he says he hopes to get Michael Buble to sing someday. He illustrated the line "the ones got shot from me" with a sudden move (I hesitate to call it a "jerk") that is probably the single most obscene (though in a good, impressive, holy cow that's funny kinda way) thing I have seen onstage this year, or maybe anywhere this year (though I did re-watch the GG Allin documentary in 2015, so maybe not; let us briefly thank David for only singing about poo, not actually flinging it at his audience). It was especially pleasing to see a couple of people who David didn't seem to know, whom I had NOT seen at these shows before, and best, appeared to be UNDER 40 YEARS OLD - maybe even under 30! - get onstage to pose for pictures with David at the end. I'm sure David was as surprised by this as I was.

More people sang along this year, too, than I recall, which was interesting - spontaneously pitching in on the "don't eat us" for his Christmas turkeys song, for instance, but also singing along with parts of songs I myself, veteran of a half dozen of these shows, did not know so well. I wonder if any David M. noobs ever leave one of his shows and go try to buy bars of ("corporate sponsor") Gorgo somewhere? It WAS a real candy bar, once upon a time, folks: I bought and ate some at a 7-11 in Maple Ridge in the 1980's, specifically because of seeing NO FUN ironically plugging it on Soundproof, but it hasn't been available for about thirty years or so, which has become part of the joke. 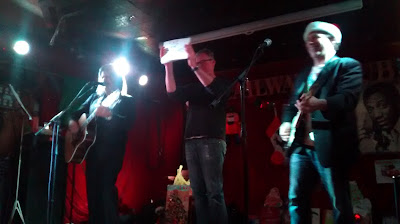 The "forty goddamn years" clapalong was pretty delightful, too, with slightly changed lyrics to reflect the lineup before us (instead of "me and Paul, sometimes Pico" it became "me and Paul and sometimes Pete," with a gesture at Pete, on second guitar; Pete had his own verse to sing, about how David has been doing Christmas songs (if not shows, which began in 1985) since he was ten, which makes him three years older than me (I did the math).  Dave Dedrick had a verse, too, as I recall, but I'm not sure, a whole night later, what it was.

I wonder if David M. knows Todd Solondz' Happiness? He definitely needs to see it, if somehow he might have missed it; Solondz' sense of humour is very close to some of what David does (though only some of it). Actually, the "Happiness" theme song would make a great cover for him... Happy 30th anniversary of NO FUN Christmas shows, David M.! Thanks for continuing to do this show!

(A couple of copies of The Fezziwig Files remain unspoken for, as of this writing; it's a hell of a package, and can be purchased via Mr. M. himself; see his Facebook page for more.
Posted by Allan MacInnis at 1:00 AM

God bless us everyone!